Skater gets a scooter and Dawn gets a doodle…

Skater is an urban kind of fellow. He lives near the center of town and finds he can get just about anywhere in Austin on his skateboard or the bus. He is very happy with the fact that the mile or so to work is uphill on the way there, and of course, all downhill on the way home. He tells me that for most people, quitting time is the best part of the day (agreed! –Hey. I used to work, okay?) and that is also true for him. He said for those folks, though, that’s it, just quitting time. For him, he gets on his skateboard and heads downhill with the wind on his face and the board under his feet. Can you imagine downhill skiing home from work? Yeah, it’s like that, I guess.

Until the night he got pulled over by a policeman.

Yes, I do believe Skater is the only kid I know to get pulled over on a skateboard. Sometimes I think if he didn’t have bad luck, he’d not have any luck at all. Apparently, it is wrong to skateboard down the middle of road, even when there is no traffic, this being a suburban type street and all. Skater was polite and explained how he enjoyed coming home from work in a downhill manner on this particular street because there wasn’t traffic. Even thought the policeman smiled, he strongly recommended that Skater stay on the sidewalk from now on.

It was after that Skater decided he needed a scooter. He explained to me that not only could he get back and forth to work a little faster, he could now take his girlfriend on a proper date, seeing as how he only has one skateboard. Gosh, what a lucky girl. 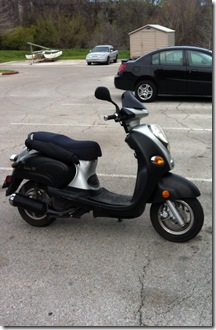 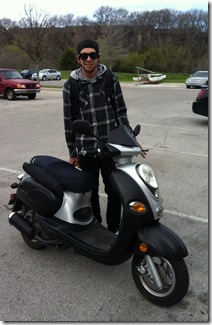 Skater and his scooter, Sheila

He asked me if I wanted to go for a spin with him, to which I promptly said, Umm. NO. Did I need to remind him of my near-death experience on one of those slaughter machines? In case you need a reminder, you can read about it here.

He promised me he would always be careful and wear a helmet, just as soon as he got one. *sigh*
Luckily, I was there in time for his 22nd birthday, so guess what Mom and Dad gave him for his birthday? Right. And dinner at Joe’s Crab Shack, which has become an annual tradition for me and the Skater. 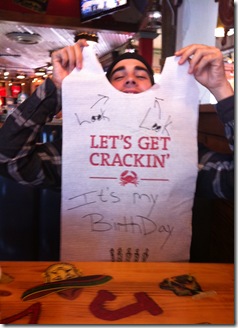 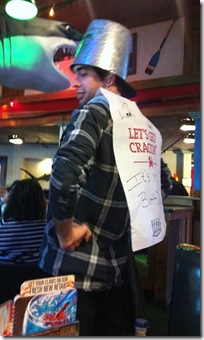 As cute as it is, no, that’s not his new helmet. 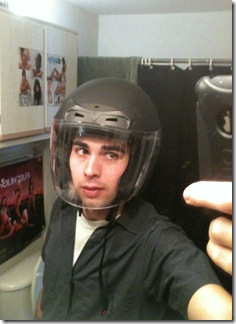 He tells me you’d be surprised at how much it hurts when a bug hits your face, even on a scooter.

While I was in Austin, not riding around on the back of the scooter, I decided to drop in at Mom’s. You know, where Moms go to get tattoos. I know, I know. I said I probably would not get another tattoo. Well, I remember saying two kids was enough, too. And then…Hello, Skater!

I had asked Skater to help design a tattoo that had the initials of all three of my children, being as how he has the most experience with tattoos (none of which say Mom, BTW). He came up with an idea and Blake, the tattoo dude, worked with it a little bit to become exactly what I wanted. As I sat down, Skater told Blake that he was the “K” so be sure to make that one extra special. I tell you, nothing bonds a mother and son more than spending an afternoon together at the tattoo parlor.

To answer the question – again - yes, it hurt. 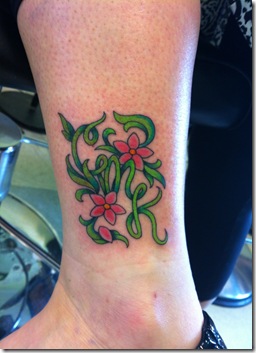 And no, Skater did not get a “Mom” tattoo. Dammit.