Customs may not be wise as laws, but they are always more popular…

Every family has its traditions. Have you ever noticed you see more of that around the holidays? Nothing special for you know, April, but bring on Christmas and you have customs up the wazoo. In that regard, we are no different than any other family.

Well, we may not have a wazoo-ful of customs, but I know we have at least two.

The first started when Skater was just learning to read. He sat before us on Christmas Eve and read to us The Night Before Christmas. He did such a great job, he did it again the next year and the next until it became a tradition. Personally, I think it was a stalling technique when we has 12 so he wouldn’t have to go to bed. In any event, even though he doesn’t actually read it anymore, we certainly spend Christmas Eve talking about all the years that he did.

Our other tradition was born out of benevolence.

When we moved to Maryland all those years ago, our various parents wanted to spend the holidays with us. Thanksgiving seemed the best for everyone. That first year, my Dad and ORMom flew out the week before Thanksgiving (thank you frequent flyer miles and blackout dates!). We didn’t let a little thing like a date get in the way. We had a traditional Thanksgiving feast over the weekend. The only thing missing was the Macy’s Day parade. The kids thought it was cool to cook a turkey and stuffing when it wasn’t even Thanksgiving yet.

They left on Monday and our next set of visitors arrived on Tuesday. Granny and Papaw came all the way from Ohio to celebrate the “traditional” Thanksgiving with us. Having just eaten our weight in turkey (and yes, even way back then I had to get a 20lb bird because the Marine may have been young, but he still loved him some turkey) the weekend before, we chose to do a ham on this Thanksgiving go-round. With all the trimmings, of course, as well as 3 more pies. Oy.

Back in those days, I was far from a stay-at-home mom. I was a work-all-day-then-drive-kids-to-practices-and-scouts-and-crap kind of mom.  (I can see why it was easier to stay thin back then) CGMan worked in DC and had a horrendous commute, but we managed to make it work. With all of that going on, we actually survived TWO Thanksgivings in two weeks. We were awesome back then.

Anyway, the I’m getting to the benevolent part.

Three weeks later, when Christmas rolled around, CGMan and I began to talk about what to have for dinner. This was our first Christmas since we moved from Memphis, where we always had Christmas dinner with my mom, stepdad and the Bro. This year, it would just be the five of us. The thought of turkey or ham made me want to hurl just didn’t hold any appeal to me. And I was tired. Dog tired. Pooped out. Done in. Kaput. So CGMan suggested going out to dinner.

Out to Christmas dinner?! Who does that??

I really didn’t think the kids would go for it, as they are pretty set in their ways sometimes. Boy, was I ever surprised when they jumped right on the bandwagon, the chuck wagon, if you will. So reservations were made at the only restaurant that was open on Christmas Day, Benihana.

We had a great time and a family tradition was born.

We had several more years of Dueling Thanksgivings, but it didn’t matter because I didn’t have to cook on Christmas! In the 15 years CGMan and I have been married, I can think of only one Christmas dinner that we did not go out for Japanese food. Even in Trinidad, we managed to find The Laughing Buddha, with their table sized boat filled with sushi.

This year, CGMan and I shared our private Christmas before I left on my journey and yes, we did indeed have Japanese food, followed by a trip to the White House to see the National Christmas Tree (also part of the original Christmas dinner plans). 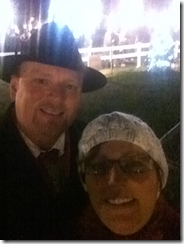 And on the real Christmas? We did it again! 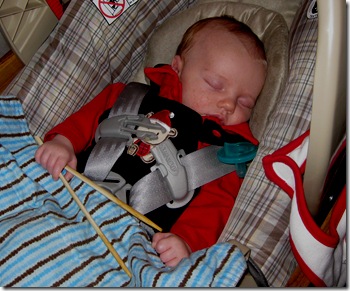 The Lil Prince knows a good custom when he sees dreams one.

What is your favorite family tradition and how did it start?