Words have meaning, names have power…

There has been much going on here at the Heifer house. As you know, it is officially the Christmas season. It became official when the Macy’s Santa said so (not when I put up my Christmas decorations, but whatever).

We have already hosted one Christmas party, been to another and have two more to attend this week. Whew! It’s a good thing I love Christmas and all the parties that go with it.

That’s not all that has been keeping us busy. We have been trying to figure out what my Grandma name should be. And by we, I mean me. CGMan has his name picked out already. As soon as we found out we were going to be grandparents he declared he would be called Cappy or Cap (as in Cap’n Crunch).

Honestly, I hadn’t given it much thought. I just wanted grandbabies. I never thought about what they would call me. The more I did, though, the more I wanted a special name just for me. There is a bit of an extended family, with three sets of great-grandparents, who are Papa, Honey, PaPaw, Granny, Grandma and Grandpa, respectively.

You know, it’s not as easy as you would think, to choose a name that you will hear from the lips of your grandchild. After reading several articles about it and also learning the 25 reasons grandkids love us, I still wasn’t any closer to hearing that special name.

We even did a grandparent name quiz, which for some reason I can only access from my iPhone, so I have no link. It was 20 questions and don’t you know, CGMan was perfect to be called Cap. I am traditional in pretty much all respects, right down to the cookie baking, according to the quiz, so would do well with Grandma, Grammy or Granny, among other traditional type names.

While it is true that I am, and will continue to be, a cookie baking grandma, I have been trying on a few different, more trendy, names. However, I tend to come back around to the more traditional ones. So much for being a hipster grandma.

Every time the Marine calls to give me a Lil Prince update, I answer the phone with “Lil Prince? Is that you? It’s Grammy/Grandma/G-Ma, etc.” Just to try them out. You know what else? It’s never the Prince on the other end. What’s up with that?

Anyway, I got a text message last night: 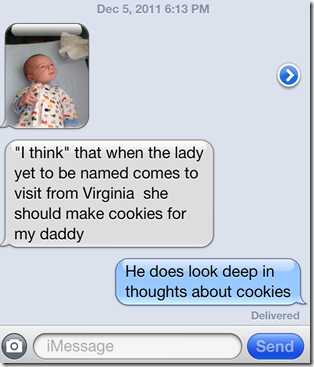 Rather than have my grandboy call me “that-cookie-baking-lady” I have finally decided on Nana. It’s still on the traditional side, but different from all the other grands. It has a nice ring to it and goes well with Cap. Mommy, I want to go see Nana & Cap. Or Yay!! Cap and Nana are coming for a visit in the RV!!  And my personal favorite, I love you, Nana.

Of course, it will be my luck that when the little guy finally learns to speak he’ll call me Pompom or Tootie or some such thing. As long as he says “I love you” with it, I will be just fine.

What are the special names for the grands in your family?
Any thoughts on what you would like to be called in the event of a grandchild?