Expect the best, plan for the worst and prepare to be surprised…

What a week it’s been!

Hooooeeeee! I am worn out.

I expected a fabulous week, having my in-laws here, and CGBro, Ella’s Mom and of course, Ella. My pies turned out awesome, even with the dog debacle in the kitchen that day. The house was clean. My grandboy was due. The decorations were up and ever so festive. Oh, there was joy, joy, joy down in my heart! 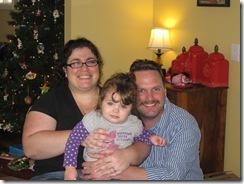 Okay, Ella doesn’t look all that happy in this picture, but trust me, she was. She had a grand time! How could she not have a good time at my house? I have dogs that lick up all the evidence every mess, I bake cookies and always offer two and I have a Christmas tree. She wasn’t allowed to touch it, but she sure did spend some time looking at it.

And then, THEN, my grandboy was born! Oh my goodness! He came just in time for us to be thankful for him and talk about him all day on Thanksgiving day. We also spent a considerable amount of time looking at pictures that were being sent hourly. Technology, I am thankful for you! 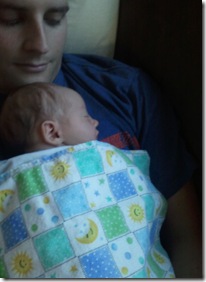 The Girl sent me pictures, too. She’s such a brat nice girl to go hold her nephew within hours of him being born and then sending the pictures to me, not at all bragging about how good he smelled and how soft is hair is. Even though she was busy running from turkey to turkey and to my grandboy on Thanksgiving day, she did send me a picture of her and her beloved, with baby, too! Oh, how I miss my kids on the holidays. 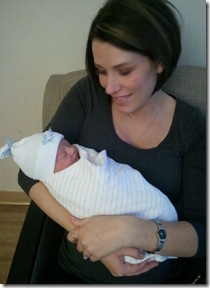 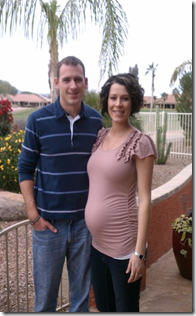 Yes, those are palm trees. They all live in Arizona. I am not thankful for that.

While the cooking was going on and the stories being shared, I had CGMan and his dad put in a dimmer switch for me. CGMan is very helpful when it comes to things like that. Sometimes he’s a bit comical, too. I remember one time, early in our marriage, I asked him to change a light bulb in the ceiling fan above the kitchen table. I thought maybe it would be a good idea for him to turn off the fan first, but he didn’t. It’s a good thing the Girl had a Hello Kitty bandaid for him to wear right in the middle of his forehead, to cover the slightly less than ghastly gash.

Anyway, it turned out fine, with only one small zap and one tripped breaker, probably caused by the maybe not so small zap. 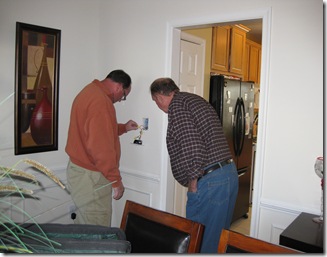 Does anyone else think this looks scary?

I had talked to Skater on the phone the day before Thanksgiving, after his nephew was born. We have all been awaiting the grandboy’s arrival and can’t wait to see him at Christmas. Skater is meeting us in Arizona, where there will be absolutely a 0% chance of snow. On Thanksgiving day, he called again to talk turkey, because he’s just silly like that. We spent a while on the phone, then I had to go. I had people to feed, you know.

And then he walked through my front door… 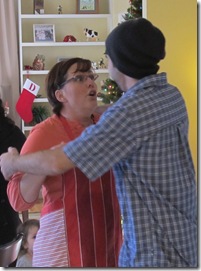 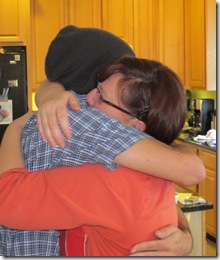 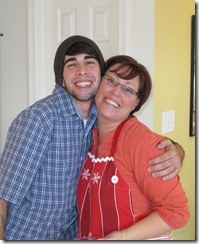 It’s a damn good thing I like surprises and have a strong heart, and enough turkey! That 25 pound bird didn’t stand a chance. However, I was fresh out of sleeping quarters, so the kid had to sleep on the couch. Zoe and Phoebe didn’t mind that, at all. I am thankful my hubby did not let our boy be alone on Thanksgiving.

I would say this weekend was a complete success.

So? What was the best, worst or surprise of your holiday?