Two wrongs don’t make a right, but three lefts do…

They had a great time eating up some of Austin’s wonderful food and hanging out in  Austin’s awesome music scene. 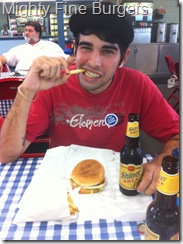 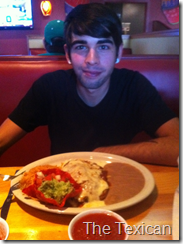 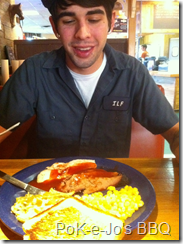 CGMan came home late Sunday night. Well, lets be honest here…he came home very, very early Monday morning. Like the very first hour of Monday. Anyway, while we were having our morning coffee (at the regularly appointed coffee hour of 8am), we started chatting about what the plans were for the day. CGMan let me know he had no plans and wanted to spend the day with me. Well, I just lit up that chat box with ideas of how to spend the day. What? Doesn’t everybody have their morning coffee in front of their respective computers in their respective offices and communicate by chat box on Facebook? Oh, just us, then.

Can you guess what I chose to do to spend the day together?
ROAD TRIP!!

CGMan thinks I’m a pretty cheap date. Well, until the price of gas goes up to $6 a gallon, then he’ll be all, “Hows about we take a bike ride??” But for now, we both enjoy a good road trip. Here are a some of the roads we saw: 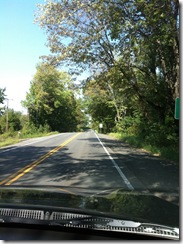 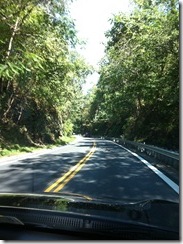 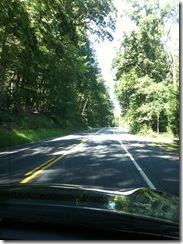 I know they kind of all look the same, but one thing they do not look like is a highway!! No sir, these are good old fashioned red roads. If you’re not familiar with red roads, they are the ones in red on your atlas. For those of you born after 1985, an atlas is a book of maps. Like a GPS with pages. Red roads are also the ones your GPS lady never takes you on, so you totally have to turn her off because she is a drag.

We took red roads northward to the state line and actually looped through three states in less than an hour. Let me tell you, from Texas, you can’t loop three states in a day! We started here in Virginia, headed north and passed through Maryland, where we made a left and ended up back in Virginia for a mile or two before we ended up in West (by God) Virginia. 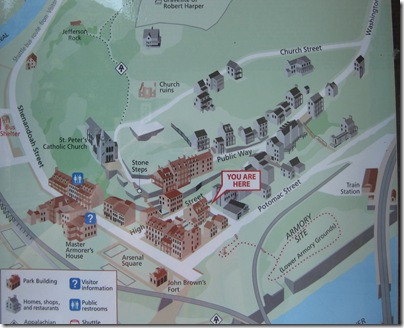 “THE HISTORY OF HARPERS FERRY HAS FEW PARALLELS IN THE AMERICAN DRAMA. It is more than one event, one date, or one individual. It is multi-layered – involving a diverse number of people and events that influenced the course of our nation's history. Harpers Ferry witnessed the first successful application of interchangeable manufacture, the arrival of the first successful American railroad, John Brown's attack on slavery, the largest surrender of Federal troops during the Civil War, and the education of former slaves in one of the earliest integrated schools in the United States.” – copied from National Historic Parks website

We stopped in town for a bite to eat and some refreshing beverages. CGMan always tries the local brew wherever we are. He enjoyed this Porter: 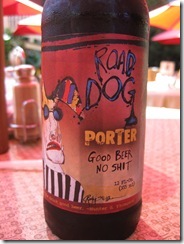 The makers of this beer and the artist who created the label (his first) fought for 4 years to have the censorship removed to allow them the freedom to describe their beer as they saw fit. They won.

P.S. CGMan totally picked that beer because he was feeling like a mighty Road Dog himself.

After a yummy lunch in an ivy covered patio, we walked the two streets of Harpers Ferry. While we didn’t take in all the town had to offer, or drive through the historic park, we did learn one thing. This town is haunted. There were no shortages of ghost tours and B&Bs claiming to have ghosts. Of course, it was daytime, so we didn’t see any. We did, however, stop in the John Brown Wax Museum to learn the history of this man, who is known as either a murderous fanatic or a misunderstood martyr.

In short, he led a violent uprising against slavery, which killed several people and freed no slaves. 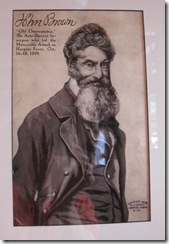 You can learn more about him here.

If you’re really interested in haunted places, there is another place to visit, which is just outside the town of Harpers Ferry. The National Paranormal History Museum aka The Haunted Cottage.

After lunch, we didn’t have time to go to this one, but since I’m the navigator on all road trips, we may pass by it again on our way to another exciting destination.

It was a fantastic date and soothed my itch for a road trip. 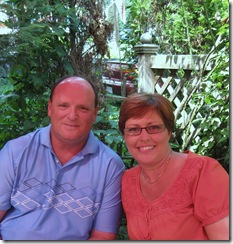 Thanks CGMan, for such a pleasant day!
And try to be here for my 28th birthday next year, will ya?