He ain’t heavy, he’s my brother…

There is a thirteen year age difference between me and my brother. Because I started very early with having babies and being a grown up before I was actually a grown up, we didn’t grow up together. After my divorce 9 years later, the kids and I moved back home for a few months. Yeah, my poor brother basically went from being a spoiled only kid to having three little siblings. Talk about rocking his boat.

We talked about that time during our recent road trip together. He said while it was hard at the time, he wouldn’t trade it for anything in the world. He and the Marine are only 5 years apart, and are now very close, like brothers. That time spent at home was good for all of us, even if it was a little crowded.

We weren’t there long, about 8 months, before I was able to get my own house, so even then I didn’t really get to know my brother. I was older and he was still a kid, playing and goofing around with the Marine and the Girl. Lil Skater was too young to be anything but a pest.

Anyway, what I’m trying to say is, he and I used this road trip to get reacquainted. It was one of the best road trips. Ever.

Here are 10 things you may or may not know about my brother:

This was a good trip for so many reasons. We saw family that needed some hugs, shared stories of our mom and spent quality time getting to know one another. You know what? If he weren’t my brother already, I think I would have picked him for a friend. 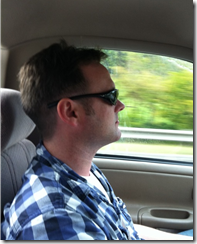 Oh, and I am now totally prepared for a zombie attack.