The one where Dawn gets buzzed…

You want to know what is fun? A block party! Our new cul-de-sac in the city had their first ever block party this weekend. It was a wonderful meeting everyone. We talked and drank a gallon and a half of Nantucket Lemonade. There were burgers and dogs (hot dogs, not my dogs), and everyone brought yummy side dishes to share. (I’ll share mine with you later this week.) We have always been about the block party and this was no exception.

As were were sitting around chatting up our new neighbors, I remembered that my brother is on TDY (that’s temporary duty assignment for all you non-military folks) right here in DC. I texted him to see if he wanted to come join the party. He wrote back to say he was very busy doing Coast Guard stuff and would not be able to make it.

I had my doubts about that, because I was married to a Coastie for the last 10 years of his career and I really don’t remember a whole lot of “busy”, unless you count practicing for the unit golf tournament. But hey, maybe that’s just officers. I also doubted his story because I had received this from Coastie bro earlier in the week, showing me just how busy he can be in the Coast Guard: 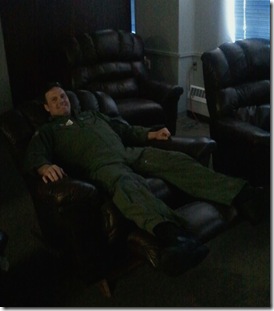 Apparently, somebody has to break in the new La-Z-boys.

Well, too bad for him and more booze for me. It wasn’t but 20 minutes later that I got a text from my brother that said, “Look up”. Right then, a beautiful, bright orange Coast Guard Dauphin helicopter buzzed our block party! My brother really was working! As they turned around to make another swoop, we all ran out into the court like little kids, waving at the helicopter. Did you ever do that as a kid? I did. Every. Time. If I was a helicopter pilot, I would absolutely fly low over neighborhoods just to watch all the little kids run out to wave at me.

Anyway, it was all very cool and our neighbors were suitably impressed. We were all, “Yeah, we know people”.

The best part? Was this picture that came on my phone a few minutes later: 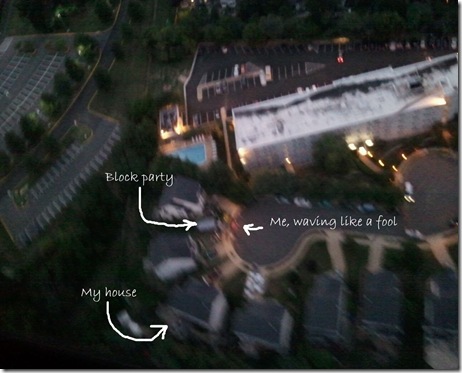 I hope to goodness he wasn’t hanging out the door to take this!

Thanks, CGBro, for doing a very serious reconnaissance mission over our neighborhood. It’s nice to know the Coast Guard is watching over us. Kind of like “Big Brother” only you’re my little brother. Bah!

It’s not every day I get buzzed, right alongside my neighbors!