We come, not to mourn our dead soldiers, but to praise them…-Francis A. Walker

(Edited to add the picture I took this morning) 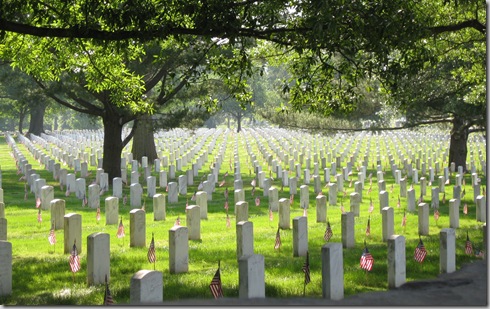 I'm sure that they would do it
If it were me or you
To show we did not die in vain
But for the red, white and blue.

Let’s not forget their families
Great pain they had to bear
Losing a son, father or husband
They need to know we still care

No matter which war was fought
On the day that they died
I stand here looking at these flags
Filled with American pride.

So as the bugler plays out Taps
With its sweet and eerie sound
Pray for these soldiers lying here
In this sacred, hallowed ground.

Take home with you a sense of pride
You were here Memorial Day.
Celebrating the way Americans should
On this solemnest of days. 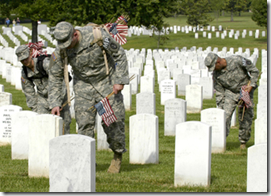 American flags are also placed at the graves of each of the four unknown service men interred at the Tomb of the Unknowns, by the Tomb Sentinels. All flags are removed after Memorial Day before each cemetery is opened to the public.
(Copied from Dawn in Austin, May 2010)

This year, I will be here, in Arlington. I plan to go to the cemetery and see the flags for myself and remember the men and women who have fallen, all in the name of freedom. We wouldn’t even be a country without people like them.

As you celebrate the beginning of summer with family and friends, please take a moment to remember all of our servicemen and women, both past and present, who have given the ultimate sacrifice, so that we might be free.

For those who still serve…I humbly thank you.