A happy marriage is the union of two good forgivers…

Those of you who have been married for a while might know the sneaky feeling you get during a move.

It starts off like this: there is that old/ugly/smelly/tattered {insert item that belongs to husband} that your husband just will not throw out. You have begged and pleaded to no avail. Once the packing starts, a thought works it’s way to the front of your brain. What would happen if it got lost in the move? It wouldn’t be my fault, right? Stuff gets lost all the time. During the move, you glance about to see if anyone is looking and oops! it just happens to fall in the trash. Oh, the liberation you feel totally overwhelms any lingering guilt there might be for your husband’s most godawful junk prized possession.

Don’t tell me you’ve never done it. If you haven’t, it’s because 1) you’re a newlywed and cannot conceive the notion that your husband would hang on to a pair of ratty, tatty, stinky sneakers because they are the ones in which he scored the winning basket in high school. Twenty-five years ago. 2) because you have never moved and are cursing missed opportunities. 3) Your husband reads this blog and you are lying.

Let me list for you some of the things that have not gotten lost on our moves, of which there have been many; high school letterman jacket that still smells like high school football victories and maybe a hint of maryjaywhanna, various small sized  golf shirts, 273626414 Ohio State baseball caps, several glass balls from an old fishing net, 2 large bags of golf balls that have been fished out of the woods and water hazards, and my personal favorite - a 15lb bowling ball (kept in the hopes that there are bowling alleys in the Caribbean).

In our 15 years of marriage and 4 or 5 moves, a few things may have fallen off the truck. What they might have been, he doesn’t remember and I certainly don’t. Win-win, right?

This time was different.

The one thing (the ONLY thing – I promise!) that “fell off the truck” was the one thing CGMan went looking for. He has been ever so helpful getting the boxes unpacked and getting his own spaces organized. Now I realize he was looking for his hat rack.

He bought this hat rack when he was in Abu Dhabi. It was one of the first things he bought to feather his nest. It had a black solid marble base (heavy!) and a bright gold pole that had been etched with diagonal lines and silver hooks at the top. He would use every hook on the thing for his hats, robe, jeans, shorts, all of it. He has this thing about hanging his pants from the corner of the door, so the hat rack gave him a place to put his pants at the end of the day. You know, instead of putting them in the laundry hamper or something. What? I’m just sayin.

I kinda thought it was ugly not suited to the style of his office – somber retired military officer. So when the unscrupulous thought came into my head that he wouldn’t notice if it went missing, it went missing.

He asked me about it the other night at dinner and I had to look him right in the eye and tell him the truth. Because for whatever devious  wifely things I may have done in the past (or may do in the future) I do not lie to him. Dammit. It would have been so easy to say, “I saw them pack it, I don’t know what happened to it” or blame it on the Skater, who, poor kid, gets blamed for any missing tool in the shed (even the ones that are right there in front of GCMan the whole time).

I apologized profusely. Honestly, I really did feel bad when I realized how much he liked it. So I apologized again. He was gracious and said that he would get over it.

This is where the good marriage comes in.

Then he told me I was to remember this the next time he effed up. Which he figured to be soon, since it’s been a while. (This insight comes from having been married for many years.)

I took what he said to heart. Yesterday on the golf course, he received a few text messages from me, as I was going through the last few boxes from the office: 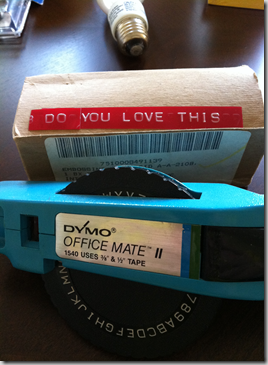 He does love this. Go figure.

Email ThisBlogThis!Share to TwitterShare to FacebookShare to Pinterest
Labels: it could only happen to me, moving adventures, things I don't understand
Newer Post Older Post Home