Last year, when CGMan and I got inked (listen to me, I have one tattoo, all of a sudden, I’m Kat Von D) of all my friends, one squealed with delight. The others thought maybe I had taken leave of my senses, premature senility, if you will.

When we were getting them, the talk around the shop was that once you get one, you’ll want another. That has turned out to be a true statement. I do want another one, but I don’t know what I want. For now, I just needed a little touch up on the one I already have. I told my bestie I was going to Moms (you know, where Moms go to get tattoos)…

…and who decided that just because Dawn jumped off a cliff, she needed to, as well? 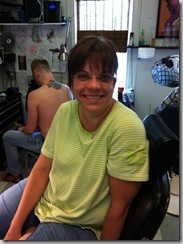 This wouldn’t be the first time someone’s mother thought I might be a less than stellar influence. Sharon had been talking of getting a tattoo since the day I come home with mine. One of her kids even has a couple (and no, neither say Mom – what’s up with these kids??)

I tried to get her to get a tramp stamp (hey? what’s the fun of being a bad influence, if I don’t help her make some bad choices?) but she had something else in mind. 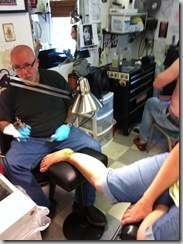 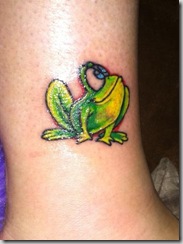 She had looked at 873467523465 frogs before we got there and then a couple hundred more once we had the artist at our mercy. She finally picked this little fellow and I have to say, he’s a cutie.

She told me afterward, that I lied to her, that I said it wouldn’t hurt. I had to remind her that she asked me if it would “hurt really, really bad”. It does hurt, don’t get me wrong. Having a baby hurts really, really bad. This just hurts a lot.

I did not get another tattoo, but I did look through a gazillion pictures, thinking about it. That’s the thing, you know when the time is right. It was the right time for Sharon.

For me, I just wanted to make the one I have, a little more special. The time was right. 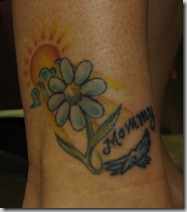 Email ThisBlogThis!Share to TwitterShare to FacebookShare to Pinterest
Labels: friends of the heifer, stuff about me, things that make me smile
Newer Post Older Post Home