I haven’t been here all that long, but something happened the other night that made me believe I’ll be staying for a long while.

You may remember our friend the photographer, Craig. He worked in Abu Dhabi with CGMan. It was with he and his lovely wife, Sue, that we took the hot air balloon ride and saw our first camel race. If you don’t have fun with these people, there is something wrong with you.

Well, Craig and Sue recently took a trip to Napa Valley. They were there long enough to take in a few cooking classes and wine pairing classes. You know, I try not to be envious, but those two looked like they were having such a great time, I wanted to be there, too.

They have now come home with a new found love of cooking and wine pairing. Craig bought a book called “Decanting Napa Valley” and has been inspired to make the recipes in it. Like that girl did with Julia Childs’ cookbook, only better. I saw the Julia Child cooking show a couple of weeks ago and I’m sorry, but her dish didn’t look appetizing at all. French or no French. This is so way better. And like that gal (geez but I can’t remember her name, other than Julie) he has started a blog about his grape adventures in Napa. You can check it out right here.

Every cook wants to share his creation with others. That’s where we come in! Lucky for us, we get to be his taste testers! Life is good.

We went to their house for dinner and immediately as we walked in the door, the aromas set my tummy to growling. I am no food critic, so I can’t even describe what I was smelling, only that I couldn’t wait to try whatever it was.

I am not a lover of lamb. We have lived in countries where lamb is a huge staple, so I have tried it prepared every which way from Sunday. Then there are my good friends far and wide, who have said, “But you’ve not had lamb the way I cook it” or “You’ll love my mom’s recipe for lamb”. Each and every time I tried it, I just did not care for it. I have even had it served to me not knowing what it was (you know how fancy restaurants can’t just say lamb, they have to get all fancy schmancy about it – Agneau Champvallo is still lamb and potatoes) and still didn’t care for it.

It’s not because I think they’re cute and fluffy… 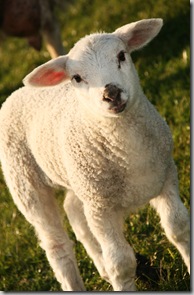 …they totally are. Just remember, I think cows are cute, too, but have absolutely no problem on steak night. So it isn’t that. I just don’t care for the taste or texture of lamb. 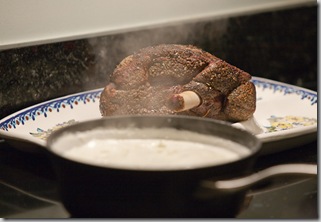 When I walked into the kitchen and saw this lamb roast, my heart sank. As beautiful as it was,I wasn’t holding out a lot of hope. I have had many a lamb that just didn’t do it for me. But it smelled so. good.

After some wine and cheese and good conversation, it was time for our host to plate up our dinner. I tell you, if looks were everything, this dish would win first prize… 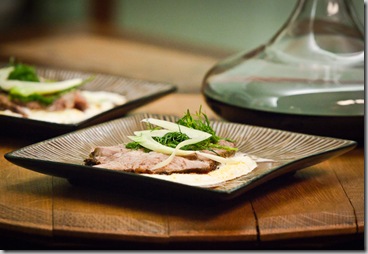 It was almost too pretty to eat. Which is why the two photographers in attendance took several pictures of it!

With a bit of nervousness, I took my first bite.

Oh! Em! Gee! Holy Lamby, batman! It was heavenly! So very, very good. I literally squealed with delight and started dancing in my chair, making mmmmMMM nummy noises. I felt like one of the judges on Iron Chef – Oh, this dish is amazing. I can taste the fennel and the puree cauliflower adds an amazing dimension, blah blah blah.

As for the real Dawn, who doesn’t know from fancy food, all I can tell you is that she had seconds! My grandma used to say that was the greatest form of flattery to a cook. I think Craig is on his way to becoming the chef that his wife is.

Oh yes, that gal is a big time foodie as well, and usually does the cooking. It was rather entertaining to watch Craig cook and watch Sue watching Craig cook. Speaking from experience, it’s hard to give up the ladle sometimes.

Let’s not forget the wine that was chosen for this dish. In case you don’t already know, I have never met a wine I didn’t like. I have no reservations about wine. At. All. 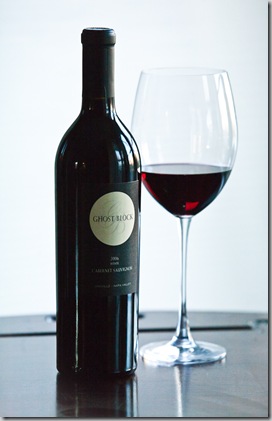 It was a 2006 Ghost Block Cabernet Sauvignon. It was almost as delicious as the lamb. They were a beautiful couple.

Given that the recipe was in a published book, Craig chose not to share it online. However, he did give it to me so that I would have ONE lamb recipe in my recipe box and I do plan to make it. When I do, we’ll do a step by step. He tells me it is ever so easy.

I would like to thank Craig and Sue for yet another amazing adventure. This time into the world of food. Like I said, with these two people, there is always a good time to be had and now there is dinner to go with it!