Yesterday, after CGMan left to begin his new adventure (read: go to work) the girls and I took down all the Christmas decorations. During the course of the day, we had many conversations about our impending move.

We speculated what it would be like, living in the city. Would we like going for walks, rather than playing in the backyard? Would the dogs at the dog parks make fun of their Texas accents? Zoe was curious to know if there are squirrels and is one allowed to chase them. They had heard there are dog catchers in the city and were worried. I assured them the dog catcher was for bad dogs who pull snotty tissues from the trash stray dogs and as long as they behaved lived with me, they would never become strays.

We considered what we might do with our time. We talked about volunteering. That would be good, right? We could work at one of the soup kitchens! After explaining to Phoebe that the food is for homeless people and not overfed bulldogs, she lost interest. However, it is something I would like to pursue.

We talked of becoming therapy dogs for hospitals and nursing homes. Not me, duh, I’m not a dog, but I could drive them there. Zoe liked that idea way better than going to a school. She suffers the little children. But that requires a little more training, so we may have to put that one on the back burner until we can find a therapy dog training school.

There was even talk of organizing a million dog march. The girls were quite excited over that prospect, but couldn’t agree what to march for. Zoe wanted to march for dog cancer awareness, like these guys. Phoebe wanted to bring attention to the fact there is a serious shortage of clothing for bulldogs. Even though bulldogs are not shaped like regular dogs, they are still dogs, and should have clothes made especially for their big heads and necks.

Then we wondered if maybe we should, you know, get a job. A real one, like Daddy. 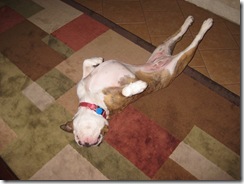 After Phoebe’s fit of giggles, we talked about what kind of job we would get. That is, if we could convince anyone to give us one. I thought I might like to work at a bookstore, even a big box one. Or one of those posh dog stores. Neither of which would lend me to actually bring home the paycheck.

Zoe said she would like to work at the library. She is very good at letting the rule breakers know they are breaking the rules. However, barking is not allowed in the library, even if it is to tell people to shut up.

Phoebe would like to be a bomb sniffing dog at the airport. I reminded her that maybe being a sniffer dog wouldn’t be such a good idea, being as how she has that short nose and all. She is positive she could do the job, because she can smell a cookie from half a block away. I tell her I am pretty sure bombs don’t smell like cookies. She made a point when she asked me if I have ever smelled a bomb. Well. There you go.

By the time we were finished with all of our musings over city living, we were done putting away Christmas. It always feels a little lonely and stark in the house, after all the decorations are down. It’s even more so this year, knowing it was our last.

Email ThisBlogThis!Share to TwitterShare to FacebookShare to Pinterest
Labels: dogs, moving adventures, things that show I really have too much time on my hands
Newer Post Older Post Home