All my life I’ve looked at words as though I was seeing them for the first time.–Ernest Hemingway

I know I haven’t been around much, lately.  I have had things on my mind. A plethora of things.

I have been trying to figure the logistics of getting the house packed up and moved to DC. We now have a house to rent there. Do I move now and leave the house empty until it sells? Or stay here until it sells? My gut tells me to stay here until it sells, because a house with “custom paint” (I love how realtors let you know the homeowner painted the walls anything but neutral) shows better with the furniture in it. Otherwise, it just looks like a discombobulated pallet of jewel tone colors.

Closer to the happy hour, the more picayune my thoughts. Such as, should I have Oreos for dinner? Or just olives? I tend to give this quite a lot of thought, as I hoist yet another glass of chardonnay to my lips, because dinner is one of the most important meals of the day. While I love to cook, I’m not keen on cooking just for myself. My usually vociferous kitchen helpers are really not much help.

Speaking of the unhelpful hounds, I took them to the park the other day. The reason I took them to the park? Because it was 72 degrees outside and sunny! After they sniffed the butts of all the dogs at the dog park (one of which Zoe had to get on her hind legs to do, because a Great Dane’s butt? is really tall) I wanted to get a picture of them with the statue of Stevie Ray Vaughn.

You music fans may be flabbergasted to know, I do not know who he is, other than he is a musician and he grew up in Austin. I don’t mention my lack of music knowledge in this town, lest I come to fisticuffs with some of the more mercurial of music fans.

Phoebe, with all her worldly insouciance, sat delicately at Stevie’s feet.  No matter the cajoling and pleading, Zoe was not to be bamboozled into sitting underneath that dadgum-thing-a-mabob. It looked like a real man, but didn’t smell like a real man and she was having nothing to do with it. 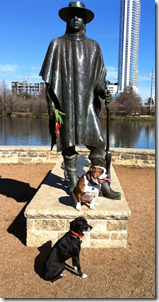 After several tries of getting Zoe to sit demurely (lookit there! I can come up with fancy words, too!) next to her sister, this was the shot I got.

You know what else is nice about this picture? There is NO SNOW! I’m just sayin.

In fact, just to the right of Stevie, in the water, was the UT rowing team. If Ms. Zoe hadn’t been throwing a fit about sitting at Stevie’s feet, they would have been in the picture, too. Yeah, jovial rowers out on the non-frozen lake. In January. Although, I’m sure there would have been quite a lot of schadenfruede going on, had the rowers tipped over. Even though it’s not frozen, that water is still pretty danged cold! But I suppose those guys know what they’re doing. They’re a little more practiced than a girl and two dogs in a canoe.

After our trip around the lake, we headed over to this cute little wonky-tonk and sat on the patio to watch the passers-by. By then, it was 3 o’clock close enough to happy hour that I had a martini and the girls shared a sarsaparilla, a drink similar to sassafras, which in laymen’s terms is root beer.

(okay, I know I totally cheated on wonky-tonk, but every time I say it in my head, I giggle)

As we come to the end of my story, I have one last picture to share with you: 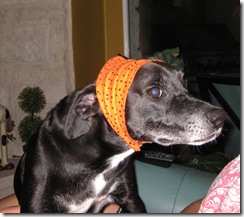 Zoe? Do you hate your pretty babushka?

Email ThisBlogThis!Share to TwitterShare to FacebookShare to Pinterest
Labels: dogs, musings, things that show I really have too much time on my hands
Newer Post Older Post Home