Segs in the City…

Since our time in Austin is short, and I needed something to write about, we decided last week to do something very touristy. We called up one of our favorite partners in crime, Deb, and had her meet us for a Segway tour of downtown Austin.

If you’ve never done a Segway tour, I highly recommend it. There was one in our group who was worried she would fall off the thing, but she overcame that within the first two minutes. After that, it was hard to keep up with her!

I booked our tour with Seg City. Since they are the only licensed  dealer in Austin, I figured they would also be the safest. Besides that, their bio page of the tour guides was hilarious.

Of course, when we woke up the morning of our adventure, it was the coldest morning of the year, at a nippy 34°. Even though the cold is not my friend, I wasn’t to be deterred. I bundled up and we headed out.

Once we arrived, the first thing Joe, the manager of Seg City, had us do was pick out our safety gear, i.e. helmets. 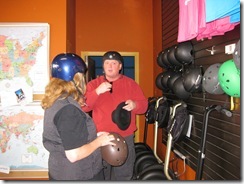 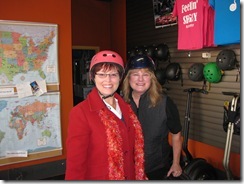 Then we watched a safety video of stick figures falling off the Segway, which was pretty funny. In all honesty, the stick figures were being stupid and that’s why they fell off. These aren’t 4 wheel drives, duh, they only have two wheels!

Then Joe gave us a lesson on how to balance, go forward, backward and do an emergency stop. 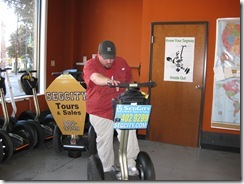 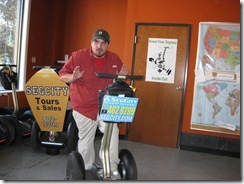 Next, it was time for a little practice before hitting the sidewalk.

Being a good friend, I let Deb go first, since she was nervous. And also, if she fell off, I wasn’t going to get on. I’m sensitive like that. 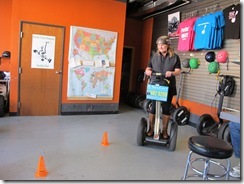 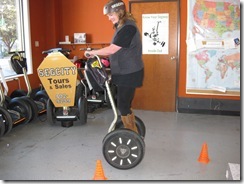 But she didn’t fall off! She started whipping around those cones like nobody’s business! She’s a natural.

CGMan came in and learned how to ride it, but didn’t pay quite enough attention to the not messing around part. 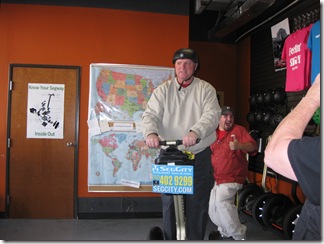 After the lesson, it was out onto the street and the tour of Austin! 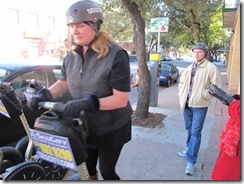 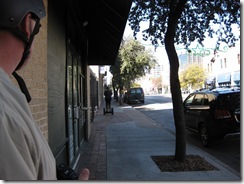 Like I said, the one who was the most nervous, jumped on and all I saw was her back for the rest of the morning!

Our tour guide, Alex, was very charming! He gave us all kinds of good information about Austin, and also took us to some great spots to play on the Segways. 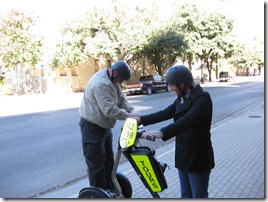 We weren’t on the street for 10 minutes when we stopped to hear a story. CGMan started messing around and fell off his Segway. He didn’t fall down, thanks goodness, but after that, Alex had to keep an eye on him. Hello, my name is Dawn and I am a tattletale.

I am so glad I bundled up, because the breeze made it really cold. But that didn’t stop me from having the best time! I waved at people on the bus when they went by, and said good morning to everyone we passed on the sidewalk.

Every tourist has to be photographed with one of the many guitars around town. Since we are tourists for the day, we couldn’t say no. 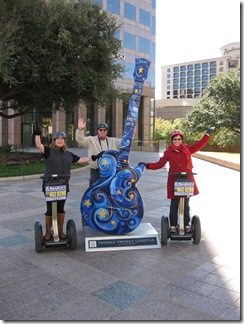 After that, we went around Lady Bird lake, which is not a lake, but rather a small dammed up part of the Colorado River. It’s a really beautiful park in the middle of Austin. They have a great dog park there, where you can let your dogs off leash. Some all of the labs like to use that area to jump in the lake. What is it with labs and water?

We crossed over the bridge, passed the dog park and headed up a little hill to rest and get pictures of the city. It was really beautiful up there. 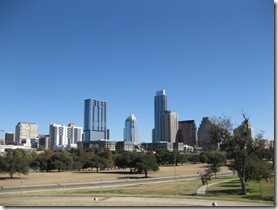 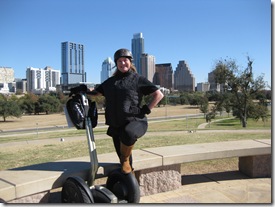 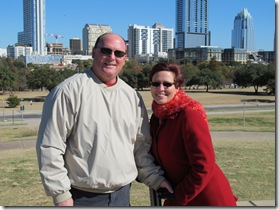 By now, we are all loving the Segways! I’m wanting one for Christmas. I am thinking that taking the dogs for a walk will be a lot more fun (for me!) with a Segway!

After we played on them in the park for a little while, we headed over toward the capitol building. That was super fun, dodging all the worker bees as they were strolling around on their lunch breaks. 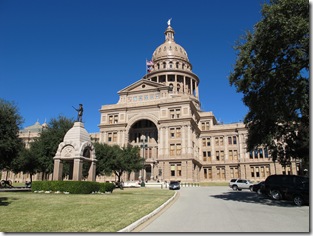 Alex was a wealth of information about Texas and the capitol. While I can’t remember it all, and wouldn’t tell you anyway, since I want you to take the tour, I do remember this: The Texas flag is the only one in the Union that is allowed to fly at the same height as the national flag. This is because Texas is a Republic and was annexed into the Union, rather than acquired. So basically, Texas is its own country within the country of the US and therefore has the right to fly it’s flag on the same level as the US. Pretty cool, hunh? 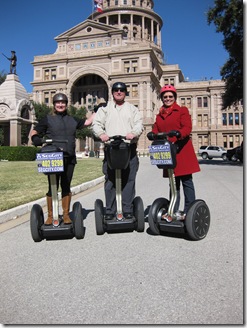 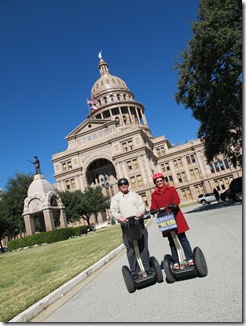 Alex is also an amateur photographer, so likes to put a little style into some of this shots. I love it!

After the great time, scooting all over the city, we were starving. We went across the street to a little cajun joint for lunch. It was a great way to finish up the adventure. 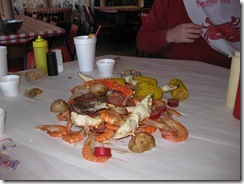 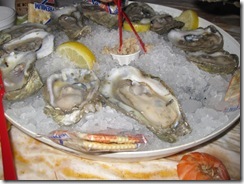 You know how I say “I don’t do cold”, and then I end up having snow in my backyard, or visit a city where it’s 24°? Sometimes that just can’t be helped. But what I do know for sure?
I. Do. Not. Do. Oysters. EVER. The crab legs were mine.

The next time you have people in from out of town and you want to show them the city, this is a great way to do it! While it might not be the cheapest thing to do, it is well worth the money. We had a fabulous time!

We are definitely going to have Segs in the city again! Look out DC, here we come!