Visits always give pleasure - if not the arrival, the departure…

We had a visitor last night.

As soon as I said that, I know some of you had a flashback to the last time I had a late night visitor. You probably think I’m going to gross you out with another story about a big, ugly scorpion. Well, I’m not. Because this visitor was not a scorpion, thankgawd!

The dogs woke from a peaceful nap on my lap (yes, the both of them get on my lap, together) when they heard something in the yard. Let me tell you, nothing sets the heart rate going than having 85 pounds worth of dogs suddenly scramble at breakneck speed off your lap, barking madly all the while. They raced out the door and proceeded to barkbarkbarkbarkbark!! at something out there. They were making such a ruckus, I thought I should check it out.

As soon as I went through the door I screamed for CGMan. Boy, he came a-running, probably wishing he had put shoes on, if he was going to have to stomp a scorpion. But this was no scorpion.

I screamed for CGMan to get the broom, at the same time trying to get the dogs to leave it alone so Daddy could get it off the porch. Then, like a good blogger, I said WAIT! Let me get my camera! 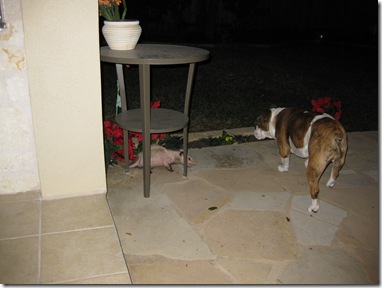 At that point Zoe gave up the fight and hid inside the doorway. Phoebe, however, thought we brought her a baby sister for Christmas and wanted to play with it. 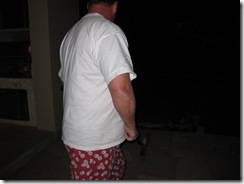 Here is CGMan, assessing the situation, as I’m taking pictures behind him, saying Don’t kill it! and he was all, I’m not gonna kill it with a damn broom!

Phoebe was still wanting to play with it, but I have managed to get her far enough away for him to swat it with the broom. 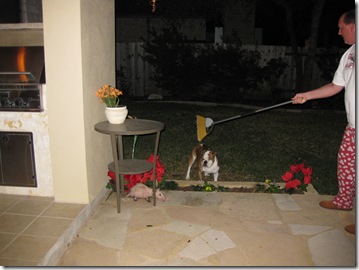 En garde, marsupial! You have met your match!

It was a couple more pictures minutes before the thing quit playing possum and ran through the yard to the back fence. 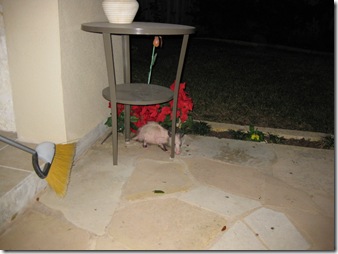 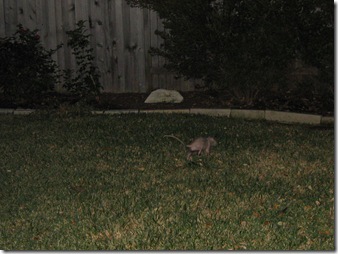 After it was over and we were consoling Phoebe to the fact she couldn’t keep it, CGMan commented that it was kind of small and skinny. I was all, It must be hungry!! to which CGMan immediately starts the mantra- Do. Not. Feed. It.

Oh, but it was too late, I already had my head in the fridge, wondering aloud what do possums eat. I found a few scraggly carrots left over from Thanksgiving and asked him if he thought the possum would like that. He answered, “Dawn. I mean it. Do. Not. Feed. It.” to which I answered with my back as I walked out to the back fence and tossed the carrots out into the woods. Oh? I’m sorry, did you say something? I couldn’t hear you.

I love animals and couldn’t stand the thought that it would be hungry.  But that doesn’t mean I want to feed them on my porch. Oh no, they can stay out in the woods. Sorry, Phoebe.

Email ThisBlogThis!Share to TwitterShare to FacebookShare to Pinterest
Labels: it could only happen to me, suburbia, things that really creep me out
Newer Post Older Post Home