Ball and chains…it’s not just for marriage

On our last day of the vacation by the lake, we drove to Huntsville, Texas to see the Texas Prison Museum. I know, I find the best museums. Going to Louvre would be wasted on me, I’m afraid. Unless they have a hall of works by Sammy, Buddy, Pinto and Koopa. Now that I would pay money to see.

So here we are the at the Texas Prison Museum. 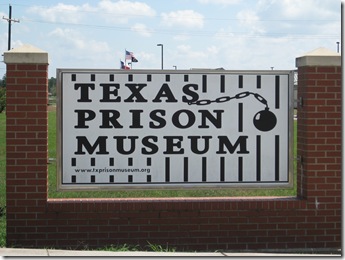 Inside were the usual stories of escapes and escape attempts. Bonnie and Clyde were featured as well. The head of the prison system at the time, Lee Simmons, hired Texas Ranger Fred Hamer to find and put an end to Bonnie and Clyde after their raid on Eastham Unit killed one of his guards. Just in case you were curious, we drove through the whole state of Louisiana a few years ago, just to see the Bonnie and Clyde museum. The things we do for fun.

It was interesting to walk around and see how things were different so many years ago and how a lot of things are the same. 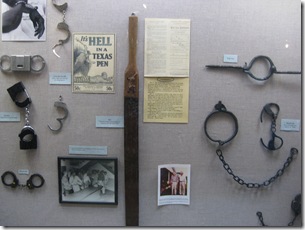 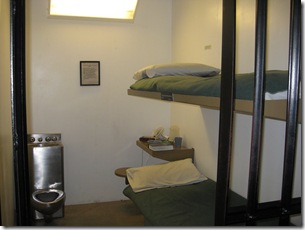 Mr. Simmons was the first to make positive changes for both the prisoners and the guards. He started the first prison rodeo. It began in 1931 and ran every Sunday until 1986. It generated revenue for the prison and became known throughout the States as well as overseas as the Wildest Show Behind Bars. We had to ask why it ended, because it seemed like such a good thing. The lady working the counter told us that the stands and fields fell into disrepair and monies couldn’t be put toward bringing the stands up to code, so they just stopped the rodeo. I think it’s too bad.

I found this very interesting: 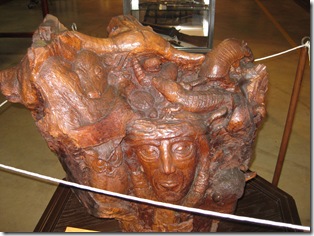 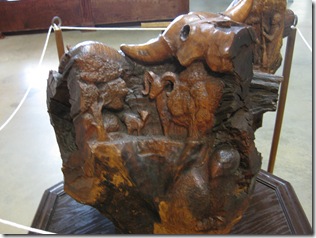 This is a stump of a black walnut tree from the Ellis Unit. When the tree died, it was cut for lumber. An inmate asked if he could have the stump to “piddle on”. In his spare time he carved animals and faces on it. The inmate paroled before completing it; however, he eventually violated parole and was returned to the Ellis Unit. He began carving on it once again, creating over 20 different faces and animals.

A lot of inmates were excellent craftsmen, making furniture and toys. 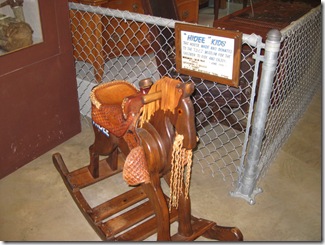 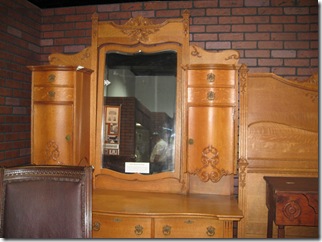 I’ve always known I didn’t have the proper mind to be a criminal. I just cannot think up the things they do. I am not a rule breaker. Looking into the case showing various types of contraband, I realized I could never be anything but a law abiding suburbanite. It would never occur to me to make a shank out of a spoon, or a t-bone. Down on the bottom left is a still. A still! I can barely find my way to the liquor store, much less think up a way to make my own booze! 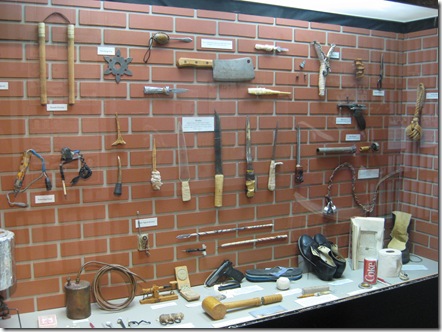 As you know, I do not use my blog to voice my political or religious opinions. Only my notions on husbands and dogs and why the hell they do the things they do. (more on that in another post) Anyway, I preface with that because there was a section on capital punishment.

Texas leads the nation with executions, even though California and Florida have more inmates on death row. From 1923 to 1964, the electric chair was used as the primary form of execution. In those years, Texas electrocuted 361 inmates. In 1972 the Supreme Court ruled capital punishment “cruel and unusual punishment”. All 45 men on death row and the 7 in county jails who had death sentences, were all commuted to life without parole and death row was clear by 1973. In 1973, a revision to the Penal Code once again allowed assessment of the death penalty and allowed executions to resume 1/1/1974. The State of Texas adopted the use of lethal injection as a means of execution in 1977 and used this means for the first time in 1982. 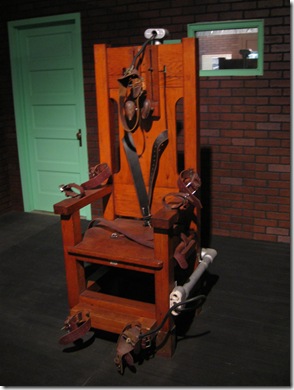 I will admit it was rather creepy, and very somber, to stand there and see the actual electric chair, named “Old Sparky”. I have seen the movie The Green Mile and that is what I see when I look at this chair.

Today, lethal injection is used as the primary means of execution.

On a lighter note, the Texas Department of Criminal Justice and Patriot PAWS entered into partnership to have prisoners train service dogs for disabled American Veterans in 2008. The partnership is intended not only to provide help for disabled Veterans, but opportunities for inmates to have a job while serving their sentence, learning a career trade and helping the community. It’s a win-win for everybody. 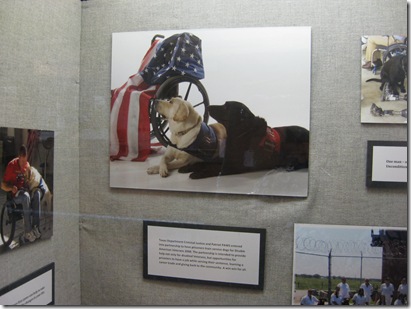 Personally, I think that is very cool. There is also another program at the women’s prison in Lockhart, called Paws in Prison where shelter and rescue dogs are trained to be good citizens and then are offered for adoption to the public. You can find more information on both programs by clicking on their names.

If you are interested in learning more about the prison museum, go here. If you would like more information on the Texas Criminal Justice Department, Death Row, click here. I used the information from these sites for my summarizations.