So much of life is determined by pure randomness…

I know I haven’t been around much in the last week. It’s just that I haven’t really had any one thing to write about, just a smattering of random happenings and musings. It’s the middle of summer in Texas and we’ve finally hit the triple digit temperatures. What that means is, everything pretty much comes to a standstill because it’s just too freakin hot to do anything. Not a lot of excitement when the heat index is 107.

Rather than have you think I dried up on the sidewalk like Abu Dhabi slugs, I will share with you some of the randomness that is my life. That is  what you come here for, right?

* CGMan was verbally offered two jobs. After several months of searching, that’s good news. That was also a month ago. Neither of them have put anything in writing.They keep telling us it will happen, we just have to wait. Unfortunately, while we “wait” we can’t look for a new house because we don’t know for sure where we are moving. For the same reason, we can’t put this house on the market. We would like to be able to tell people that we’re moving, but we just don’t know for sure. I believe that if you don’t have it in writing, you don’t have anything. So we’ll just wait. Let me tell you, limbo is only fun when you’re drunk and think you can dance.

* With the thought of an impending move, I have been busy purging. There is nothing like the thought of moving that makes you wonder why you hang on to so much crap stuff. There have been some interesting conversations about the validity of keeping a bowling ball that hasn’t been used in 14 years. This ball even moved to Trinidad with us. There are no bowling alleys in Trinidad. I can say for certain, the bowling ball is not moving with us this time.

* I have been able to have some paint therapy as I finished up the two rooms that hadn’t been painted. This house came with a plain, vanilla, flat paint. I like color, and I love to paint, so have spent the last four years painting this house. And now I am finished. I guess it is time for a new canvas.

* Skater found the snake that had been lost in his apartment for the last two and a half weeks.  Um? yay?

* CGMan and I went to an outdoor concert last week. This is one of the reasons we love Austin so. They have free concerts in the park and you can bring a picnic, your kids, your dog, but you’re not supposed to bring wine. We didn’t bring a picnic because Salt Lick had a tent with the best BBQ in Austin. We didn’t bring our kids because they’re all grown up and we can’t make them hang with us like we could when they were little and scared of us. And we didn’t bring our dogs because sometimes we need a break from them (remember, we’re both stay-at-homes right now). Wine, what wine? But we had a great time looking at other people’s dogs and grandbabies. There was even a group from San Francisco, stopping every now and then to play for the crowd. They were quite good, so we bought their cd. 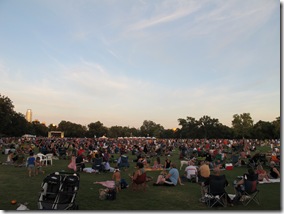 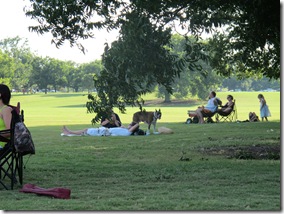 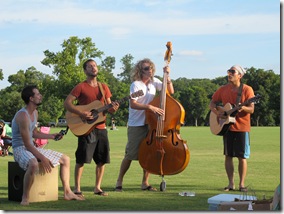 * Last, but not least, I found that if I make a new recipe for banana pancakes and they turn out crappy, CGMan will take me out to breakfast where I can have a fresh asparagus-tomato omelet with asiago cream sauce and little red potatoes. And a bloody mary.

So I don’t feel alone in my little limbo land, tell me of the randomness that is in your life…