You’re an emblem of the land I love…

There isn’t too much that bugs me. I’m a fairly open-minded person. If two people want to get married, they should be able to get married. If those same people want to adopt a family, they should be able to do that, too. Who am I to say whether it’s right or wrong? If you want to ride your bike to work, go for it, but I’m going to ride in the A/C comfort of my car. Yes, I know it runs on gas. Not all of us can afford to buy a new hybrid. Although, in my humble opinion, I think that should be the choice for the next generation of cars. If that’s only what’s available, that’s all people will buy. Right? Just like big screen TVs.

Anyway, my point is, there are few things that get me riled up.

Our flag is something I take very seriously. And by our flag, I mean the national flag of the United States of America. The Stars & Stripes, Old Glory, or even the Star Spangled Banner. It’s a flag we all know by sight. But one we don’t see often enough.

Some of you may remember my foray into the retail world last year, to purchase a new flag for my house. It’s time again to get a new one. I had no trouble this year, as the blue store with the smiley faces had a whole section with a wide variety. They even offered the one with the 20 foot flagpole, which I’m not allowed to have in my neighborhood. Damn HOA.

No, what has me all riled up today is this: 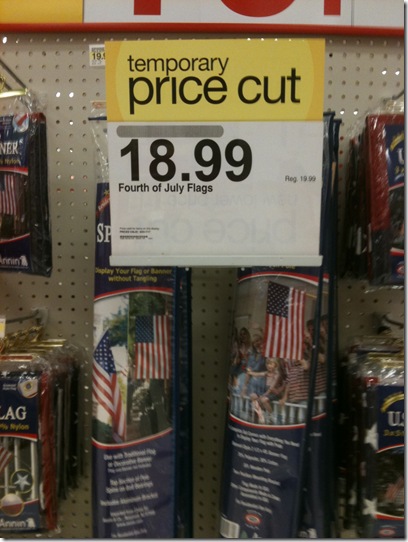 Anyone on the planet can recognize the American flag.

It’s a shame one major retailer in America…doesn’t.

I’m sorry bull's-eye store. You have just lost my business.

"If anyone, then, asks me the meaning of our flag, I say to him - it means just what Concord and Lexington meant; what Bunker Hill meant; which was, in short, the rising up of a valiant young people against an old tyranny to establish the most momentous doctrine that the world had ever known - the right of men to their own selves and to their liberties." ~Henry Ward Beecher