I never really understood that saying - “It’s a bug’s life”. Does it mean they’re taking over the world and one would be charmed to be a bug? Well, except for the ones who hang around the interstate.

On my recent trip, I not only encountered plenty of interstate bugs (and can someone tell me why, in the huge of expanse of windshield, they have to land right in front of the driver’s face?) but also some new (to me) bugs. Oh, allow me to share.

First there were the bedbugs. We stayed one night in a motel in northern Maryland and that is where I believe to have been brutally attacked by bedbugs. The bites did not show up for a day or two, and by then, we were long gone. It was my admirable deductive skills, and Uncle Google, that led me to that conclusion.

No, I did not see the bedbugs because of course, at the time, I was not looking for them. Once bitten and five days spent scouring every bedbug site in the world wide web, I look for them all the time. Every. Night. I know you have questions, so let me help: Yes, they can be seen, if you know where to look. More often you will find evidence of them before you actually see them. They are about the size of a tick, but move faster. The leave a mess where they live that easily looks like mold or a bit of mildew. This would be found along the seams of the bed and in the cracks.

You might see the bugs there, but most likely, not. They hide in wood, in holes, cracks and in severe infestations, even under the pictures in the hotel rooms. But for that type of infestation, it would take a long time at a really dirty hotel and we don’t stay at places like that.

Even a few will bite and that’s what I believe happened. It was not a dirty motel, in fact, it was cleaner than some named hotels where I’ve stayed. Speaking of bites, the sign that it’s bedbug bites and not mosquito (for whom I am also a delicacy) is the linear pattern. They only bite the part of you that is exposed. Now it comes in handy that I like a room to be quite chilly when I sleep. If your arm is sticking out, they will eat, move along, eat some more and move along. You cannot feel them, as they wait until you are quite sound asleep. By the time you wake up, they are long gone. Let me tell you, compared to ticks (for which I was a magnet when I was young), who hang on until they explode, I am thankful for this.

So, you might now have a long line of small red, blistery looking bites on your arm. They itch like crazy. I honestly believe it is what caused people to go mad centuries ago. Isn’t there a saying about being crazy as a bedbug? See? You can put anti-itch lotions on and take Benadryl, but it’s up to your own body whether that works. However, speaking from experience A) putting on every single brand of anti-itch cream at the same time does not work better than using just one, B) taking Benadryl and using the cream that has diphenhydramine (Benadryl) in it will cause you to OD and sleep for a day and a half, but at least you can’t feel the itching. C) it’s almost easier to tell people you have chicken pox than to admit you were bitten by bedbugs.

After coming back from New Jersey, we had an evening at Auntie Narmie’s where I went for a horseback ride with my uncle. I met the horsefly. They are big, loud and punishing. When they land on you, they hook on and won’t get off, causing one to scream and wiggle and scare the horse.

And last, but certainly not least, was another interesting little critter. It’s really small, you can hardly see it, but because of my acute bug sense (and the fact that I am now bug paranoid) I happened to see it. Of course, I ran to the computer after killing it, sure that it was another blood sucking, take over the world kind of bug. I found out that it is a very good bug to have in your house because it eats bad bugs (how can they tell which of their species is bad??) Like I said, it’s small. A little bigger than an ant. 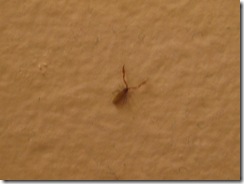