Low to the ground at the speed of sound…sort of.

It has been brought to my attention that I show many a picture of my dog, Phoebe, in a position of repose. You know, napping. This is because she does that a lot. Nap. She’s the best napping dog I’ve ever had. If they gave out prizes, you know in the non-working group, for napping? She’d win. Paws down.

Don’t let her talent and good looks fool you, she is in fact, a very active dog. She’s so active the only time I can get a good picture of her is when she is napping. Sometimes she just moves too fast for the naked eye or the camera lens. 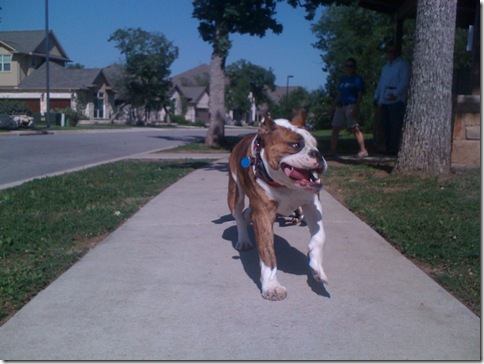 This is one fast moving dog, I tell ya. You remember the Bionic Woman? And that crazy sound that played when she ran? I swear you can almost hear that when Phoebe is running. She’s not much for the long distance running, she’s more about the short burst of energy. After twenty minutes of bionically running amok around the backyard, she is ready for her nap. Again. It recharges her bionic batteries.

So, for all of you who think we just lay around in the sun all day, we do  just remember the saying, “It’s best to let sleeping dogs lie”. There’s nothing worse than a bulldog who hasn’t gotten her nap out.