Change of weather is the discourse of fools…

I’m not sure who Thomas Fuller is, but my mom used to buy brooms from the Fuller brush man. And I’m not altogether sure what that quote means, but we sure did feel like fools on Saturday. First, because we thought the weather would change to suit our desires and second because we didn’t bother to check the news before we headed out.

We decided to go on a day trip on the Bluebonnet Trail. It’s an all day drive and winds through hill country and showcases some of the best bluebonnet spots. The bluebonnets actually peaked a week or so ago, but they’re not dead yet and there are plenty other flowers to see. 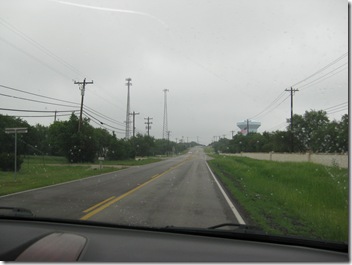 Even though it was a dreary day, we just knew for sure it would clear up just because we wanted to see the wildflowers. Right? We had things we wanted to do.

It had been looking like rain for several days and never did, so we figured we would be okay. No rain, just dreary. Yeah…

We thought it would be fun to bring along our trusty co-pilots. Everyone knows it takes one to read the map and the other to tell dad which way to turn and Be careful, you don’t want to hit the squirrel! 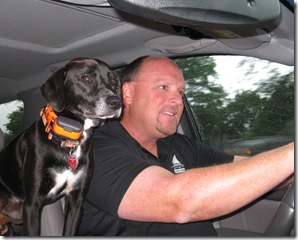 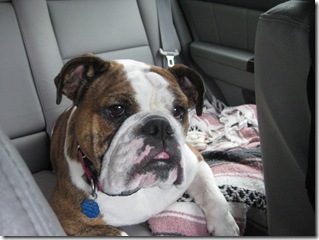 One takes her responsibilities seriously, the other takes her nap.


After stopping for breakfast, we noticed that the sky didn’t seem to be clearing at all. In fact, it was starting to look rather nasty. The question was bandied about whether anyone checked the weather? 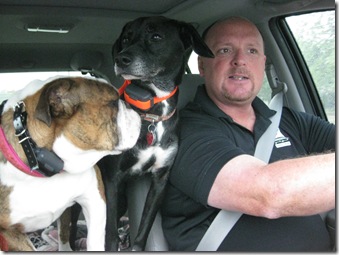 Did you check?
No, I thought you checked. You’re the knowitall.
Shut up and get in the back.
Dad, she told me to shut up.

It’s kinda like having two kids in the car. Seriously.

Since we didn’t have a proper weather report, I had the genius to remember my trusty iPhone and it’s nifty weather app. Not only was it going to rain, every county on our Bluebonnet Trail was under a severe weather watch. Flash flooding. Everywhere. 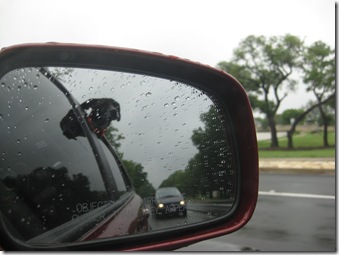 We turned around and headed for home. Once we were close, it lightened up a little bit and stopped raining. We decided to run the girls at the park before we got home. They had been really good in the car and thought we were on a road trip. They had no idea we were around the block from home, to them, it was a mighty adventure. 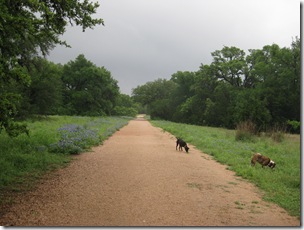 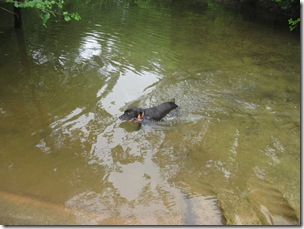 We didn’t care if they got muddy since we were going straight home and into the bath. There were plenty of good puddles to play in and drink from. And yes, there were even bluebonnets: 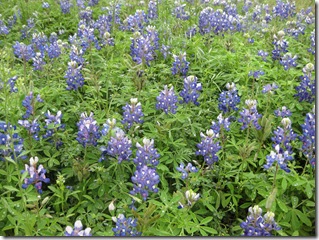 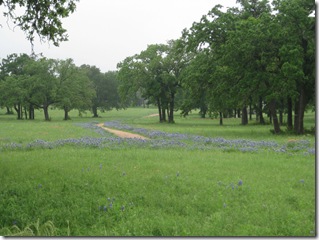 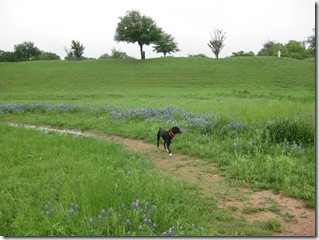 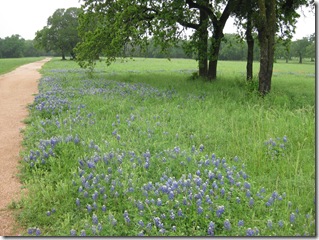 I want to tell you that chivalry is so not dead in Texas. The men around here say ma’am (in a nice way) and hold doors and the like. Well let me tell you about my husband, CGMan. We came upon a rather large puddle… 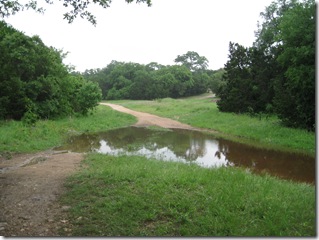 …and I was wearing
pretty sandals… 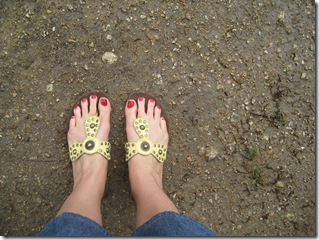 So he carried me across the big puddle. Now don’t get all excited that he swooped me off my feet and waded right through that puddle. No sir, it was a little more protracted than that. First, he had to shed his camera, hand me the umbrella, take off his shoes and then brace for me to leap on piggy back style. In case you don’t remember, we are not in our 20s anymore. Not even close. So the leaping and bracing were pretty hysterical, if one was watching, and thankfully no one was. But my man, knowing I was documenting our adventure, didn’t even complain when, halfway through the puddle, I shouted Hang on a sec! 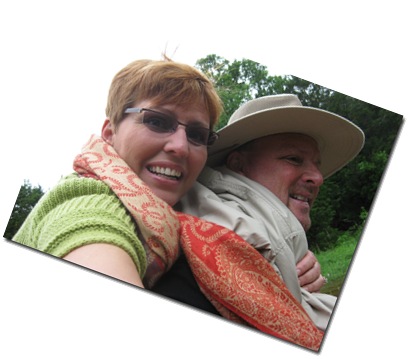 That’s right, I had to take a picture of him carrying me piggy back! Luckily, you can’t hear the popping in his back as he managed not to tip over in the big puddle by his not 20 year old, and not 130 pound, wife digging her camera out of her pocket, while trying to keep her sandals on her feet, so she can capture the moment.

The dogs think we’re totally crazy.
I’m not sure I disagree. 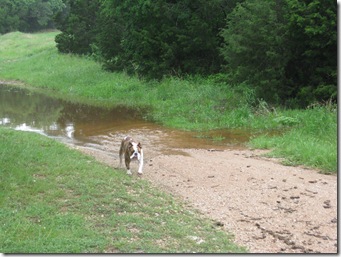 They sure didn’t have any trouble getting through the puddle.

We all agreed on a few things, first, there are times when it’s good to check the weather before heading out. Second, a walk in the park is always good, no matter the weather. And third, it sucks having to sit in the very back when you’re all muddy. 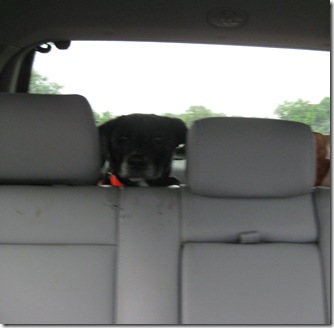 It’s really hard to be a co-pilot from way back here.
Hello? Dad?