When the sands shift, all is revealed…

“What is blue and white and red all over?”

If you looked at the picture of the crystal clear blue water and white foam, that is about as far away from red as can be, and thought Red Sea, and if from that you guessed we were in Egypt, you would be correct! 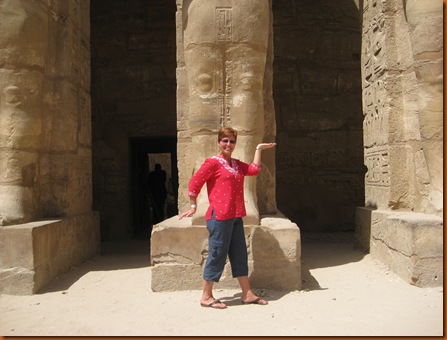 The first few days of our trip were spent in Hurghada, which is a seaside resort area (filled to the brim with Russians and Germans! not one other American in our hotel) Hence the snorkeling in the Red Sea. The day after that, we went to the new marina in downtown Hurghada. It was a nice afternoon spent away from all the buses and tour groups. Not much in the way of pictures there, except for this one that CGMan thinks is cute: 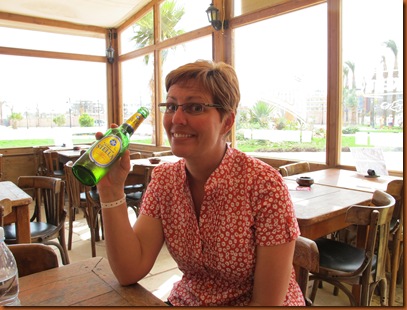 This  mostly for the fact that I am not a beer drinker. But when you’re in a country that has no ice, because the water is so bad, you drink what can be drunk with no ice. Beer. Or wine. Lots of wine.

On the way out of the marina, we saw a herd of goats running down the road. While we’ve seen goats running amok like this in other countries, this was the first time we realized they were being run off the block in an apparent turf war: 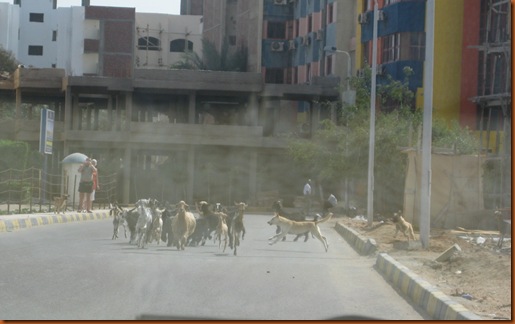 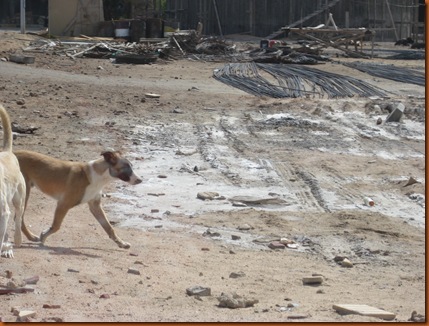 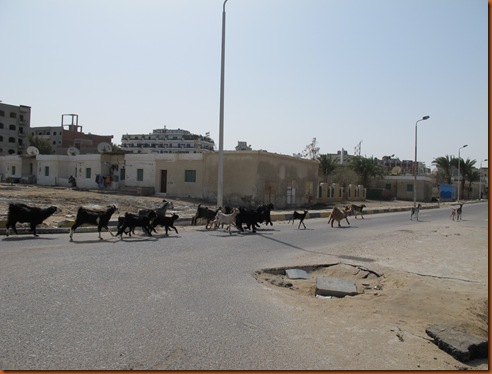 Later in the evening, we went to a show about Egypt. It was a great light and sound show, then of course, the belly dancer. But first, there was a camel ride!! I never say no to a camel ride. 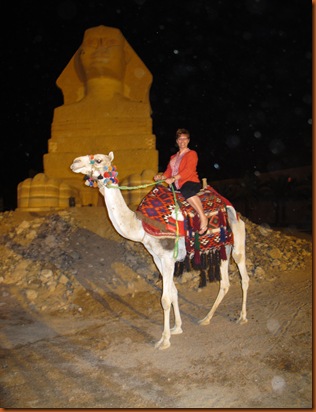 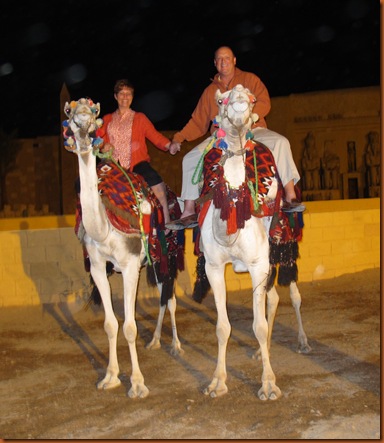 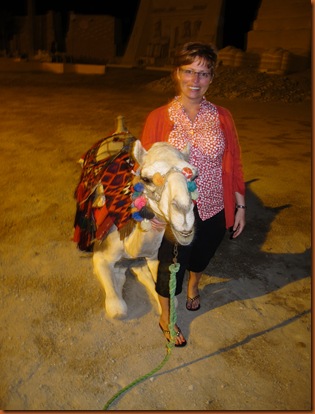 Because we arrived early, and there was no line for the camels, we got the full treatment. And by that I mean, we had the money-grubbing attention of the camel herder dudes. They took too many all the pictures (which turned out alright) and then wanted money and always more than you want to give them. Even with extortion tipping, there is a haggle. It doesn’t matter though, because CGMan loves to haggle. You might think that’s a good thing, but try breaking him of it at the meat counter at HEB.

The show was great. It wasn’t long, and had only a few dance numbers. The first number lasted about 20 minutes. It was these two guys, twirling. For twenty minutes. Non. Stop. 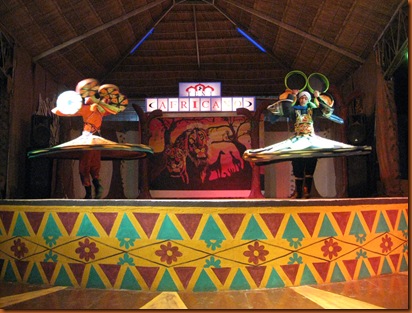 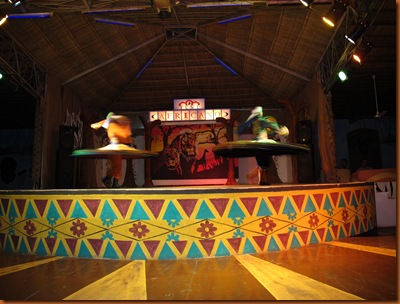 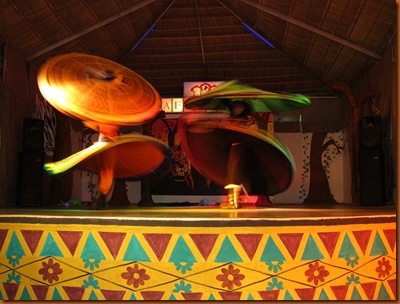 Honestly, I got dizzy just watching them. At the end, they had hardly broken a sweat and weren’t even breathing hard. CGMan and I compared how many ways of dead we would be, should we try something like that. And really, how drunk do you have to be to think this would be a good idea?

The last was the belly dancer. She was great! 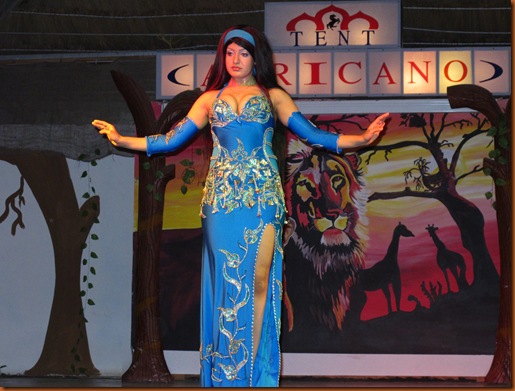 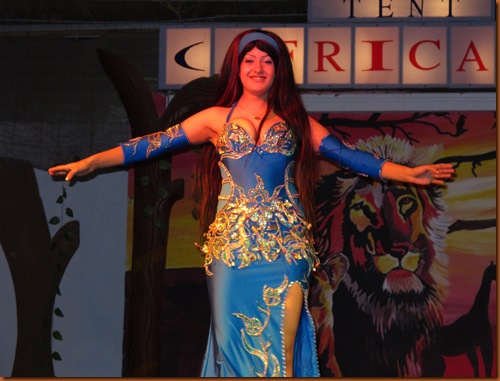 She could jiggle her hips without moving any other part of her body. I’m just the opposite, when my hips move, my whole body jiggles. Oh! And her breasts could dance! She had a way of just standing there and without moving anything, make her girls almost jump out of the dress. CGMan had to lean in to me to whisper, “Can your boobs do that??” He’s cultured like that.

On the way out, I helped an artisan cut designs on a gold elephant. It’s hard work and there are no instructions or diagrams. Didn’t take but a second for my hand to slip. I could see my mistake but he said it was fine. I guess he figures if no one else knows it’s there, it’s all good.  So if you buy that elephant, ask for a discount, because it was damaged by a novice. 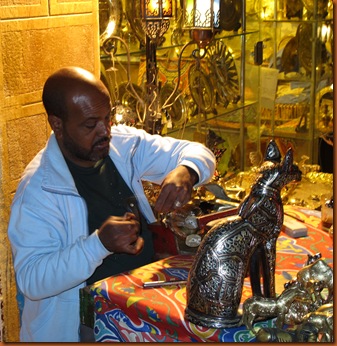 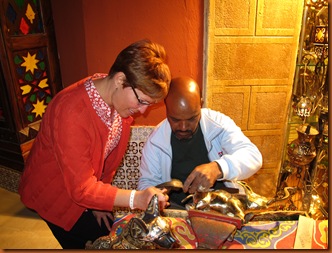 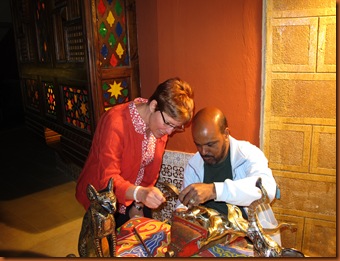 Join me next time, (you know, when I have internet) as we spend a whole day in Luxor, the Valley of the Kings, with two other Americans, who thought they were the only Americans in Egypt, and three Italian students, who have convinced us our next trip should be to Italy.

Look for me on the weekend!