Luxor, not just a Vegas attraction…

The resort town of Hurghada doesn’t offer much except resorts. But people come by the busload, literally. The tour groups have everything planned for them from sun-up to sun-down. They travel in packs. We’re not pack people. We are strike out on our own people.

We did however, hire the services of a guide. We had heard it is essential to have a guide and/or driver. We were warned that just to cross the street is putting your life at risk. After the “Scooter Adventures of 2009”, we have learned to heed good advice.

We sat down with our guide, Refaat, and listed for him the things we would like to see and do. He explained that he had another small group from another hotel that wanted to do the same. Would we mind grouping with them? I’m so glad we said yes, because we had a great time with them!

We headed out the next day on a 3 hour drive south to Luxor, and the Valley of the Kings. I’m going to stop right here and make an admission. I am a people watcher, not a lecture listener. Refaat was great at telling us what we were seeing, but between his accent, taking pictures, dodging beggars and looking at all the people, I didn’t get it all.

With that said, I’m just going to show you the pictures I took. If you have any questions, feel free to ask and I will Google and get back to you with the answers in an attempt to make it sound as if I learned something more on this trip than how to drink beer and ride camels. 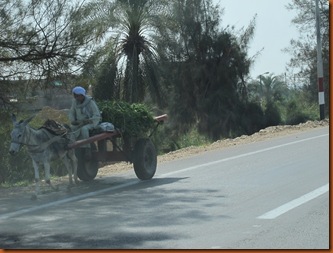 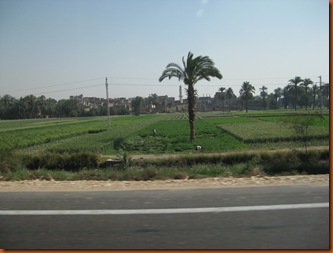 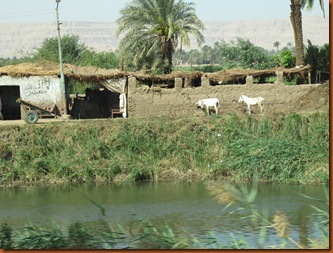 Egypt is over 90% desert. It is along the Nile that life abounds. It was amazing to see how simple life is out of the city. We didn’t see one piece of machinery working the small fields. Usually it was one person, squatted, cutting whatever it is they’re growing. I couldn’t tell.

Some of the homes had only thatched roofs and curtains for doors. I suppose when you live in a place where it rains once every 10 years or so, it’s okay to have no glass on the windows. Others looked like multifamily dwellings, with only little better fixtures. Honestly, it didn’t look as if electricity ran out to this part of the country. I would have thought so, if I hadn’t seen the satellite dishes on top of just about every building!

When we reached Luxor, we stopped at the first Temple of whatever he said. I do know that this is 3,000 B.C. We were greeted at the gate of the grand temple by King T-tum. 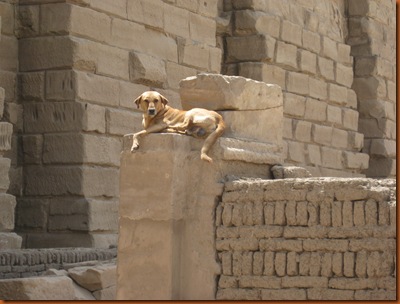 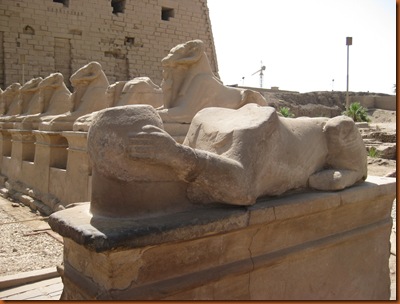 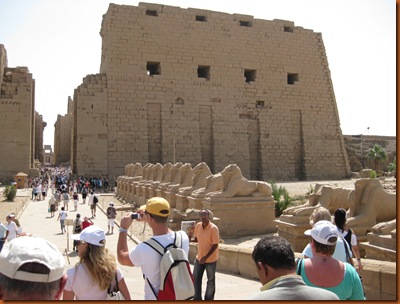 Inside the temple was an area that had 143 columns. 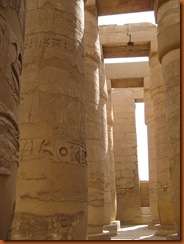 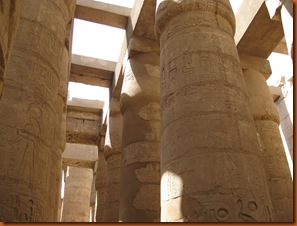 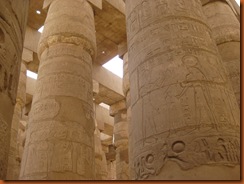 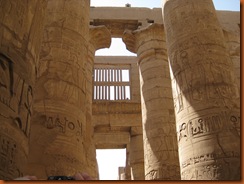 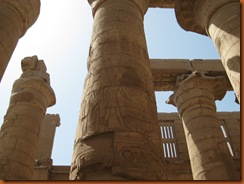 We did notice there was a lot of reconstruction. But they did not recreate any of the carvings. The carvings you see are from 5,000 years ago. The blank cement is just holding it up. I would imagine when it was found, it looked like a big jigsaw puzzle. 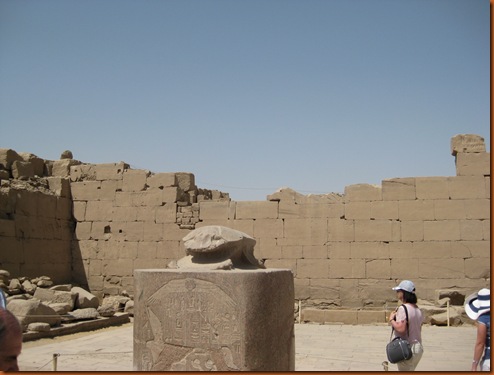 This is the sacred Scarab Beetle. Refaat told us if you walk in a circle around the beetle it would bring you many things. One circle would bring you money, the second time a good marriage and so on (because you know I forgot). I do know that number seven was fertility so I had CGMan stop at six laps. I figured anything up to more babies would be plenty luck for us! Hey! I didn’t even think to ask how many laps for a grandbaby! Dammit. 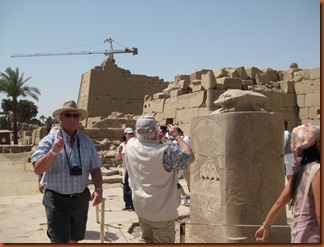 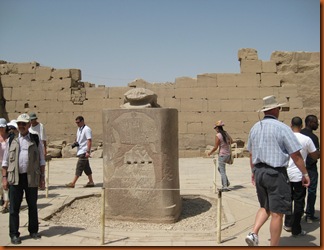 I may or may not have picked up this little rock to bring back to Wow. If it’s a national treasure, I only took it’s picture and then placed it back on the ground. Honest. 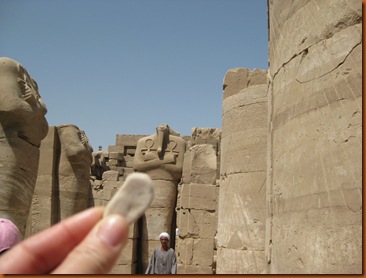 These are some statues, who are very important I’m sure,  that were standing at one of the entrances. This temple was like a maze as you moved around the areas. 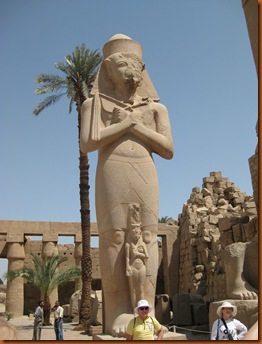 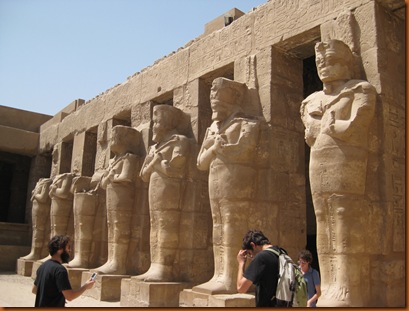 Some jobs here at the temple are so important, one can’t leave his post. 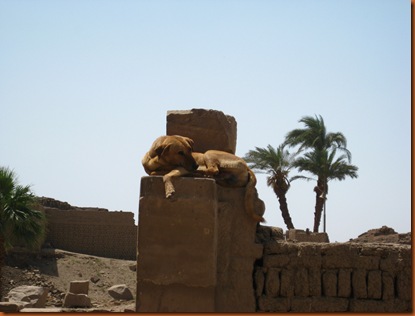 I may not have filled your head with knowledge, but I hope I’ve filled your sense of adventure. Even though I don’t remember the history, I was filled with awe just knowing how old and how lasting all of this is. I was amazed at the buildings and statues made with only manpower. Living in a culture where I’m lucky if anything lasts for a year, I’m dumbstruck knowing this has lasted, almost perfectly, for 5,000 years!

Next time, lunch on the Nile and the rest of the trip through Luxor.

P.S. Just as I went to post this, I found our ticket. Rather than do a complete rewrite, here is the link on Wikipedia: Karnak Temple - they paid way more attention than I did.