I was born to ride a camel….

Our last full day in Egypt was spent clutching my heart and praying I would make it out alive. Our driver, Ammhed, was a very good driver and thank gah! Because the people in Egypt drive like absolute maniacs. There is no rhyme or reason to the way they do anything. The lines on the road? Purely for decoration. I saw five lanes of cars on a three lane highway. If there is even the slightest gap between two cars, another will toot the horn and move right up between you. And don’t think it’s without accidents. Every car on the road was a beater.

The city buses are literally packed with people hanging out the windows and the open doors. On the taxi vans, the doors must not slide shut, because I didn’t see any that were. In fact, from my hotel room, I watched a taxi van stop in the middle of the three lane highway to let a little old woman off. In the middle of the road!! Sweet jelly and molasses! It was all I could do not to yell “LOOK OUT!!” to her as I saw another car careening her way. Apparently this is ever so normal.

Our driver was just so calm about it all. It’s like watching a train wreck. No matter how bad it is and how scared you are, you just can’t look away. No one else seemed scared, so I put on a brave face (and my seat belt) and said, Let’s go!

Our first stop? The Great Pyramids of Giza. 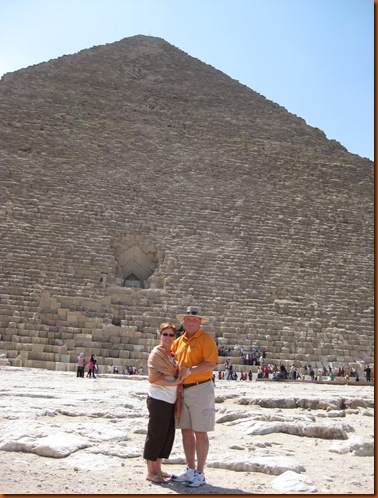 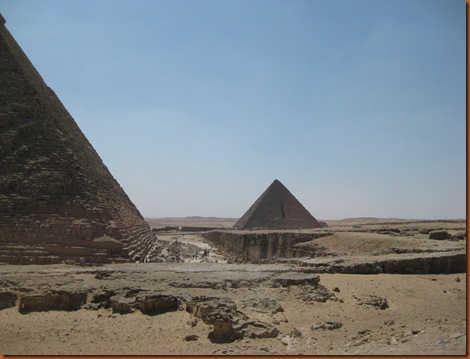 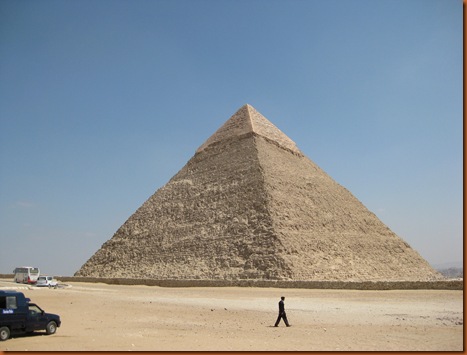 But first I had to get a picture of the Egyptian Mountie: 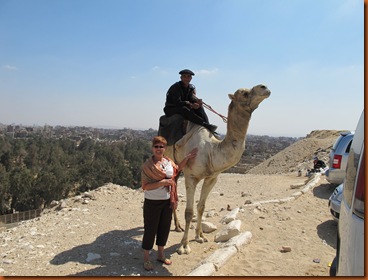 Now comes the best part of the whole trip! We rode camels out behind the pyramids! It took about an hour and we had some of the most magnificent views. Literally took my breath away. 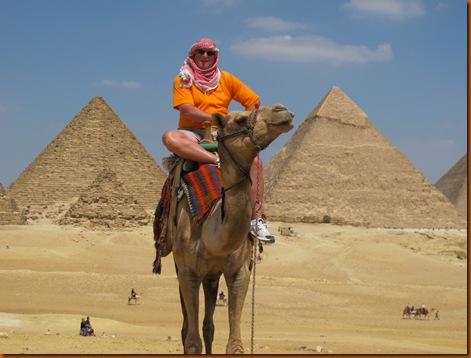 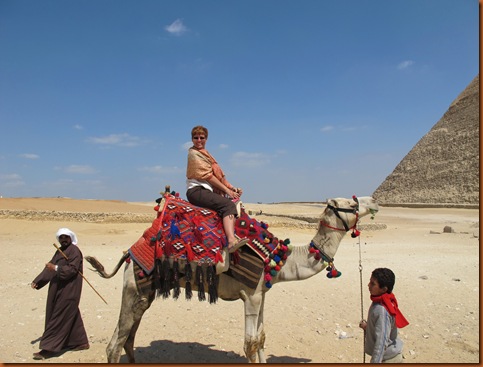 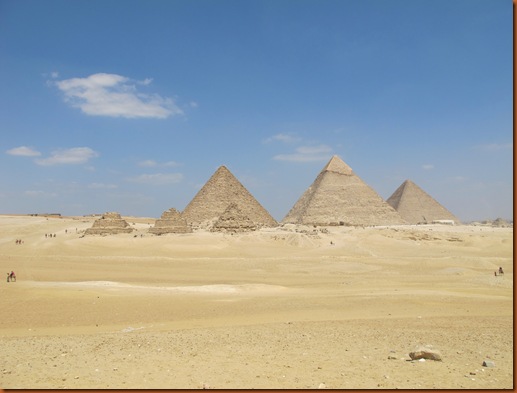 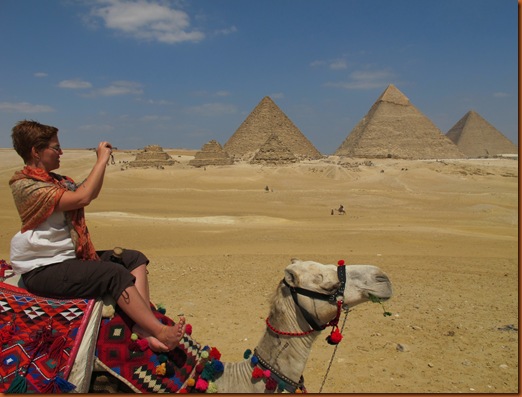 It was very windy and rather chilly out in the desert. One thinks of Egypt and the desert being always warm, but really, it can get downright cold sometimes.

The crowds (and there were a lot of crowds!) are all on the front side of the pyramids. Riding around to the backside like this was so rewarding! It really seemed as if we had gone back in time. It gave you the feeling of what it must have been like to be riding along on your camel and see these on the horizon.

And what’s the fun of going to the pyramids if you can’t be “touristy”? 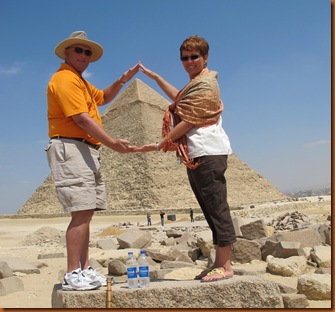 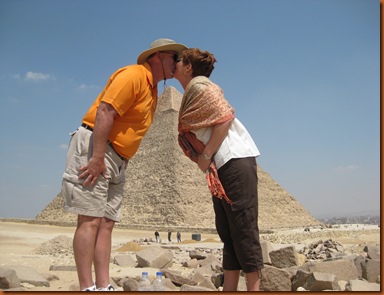 The city of Cairo and Giza have built right up to the steps of the pyramids. The population of Cairo is 22 million. 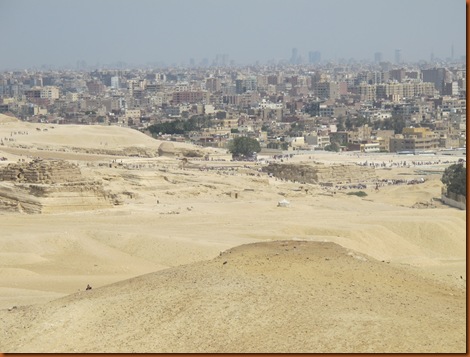 I kept looking for the Sphinx, but didn’t see it anywhere. We didn’t see it until we were back in the van and headed down and out of the park. He is walled off, so you can’t get up to him like with the pyramids. 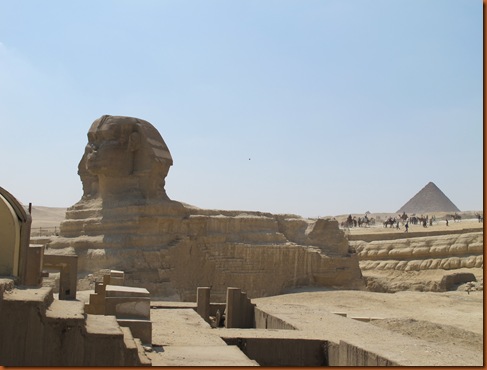 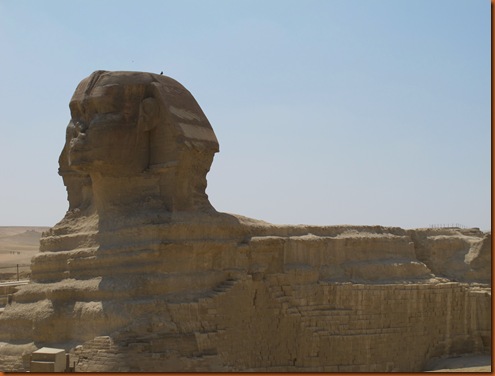 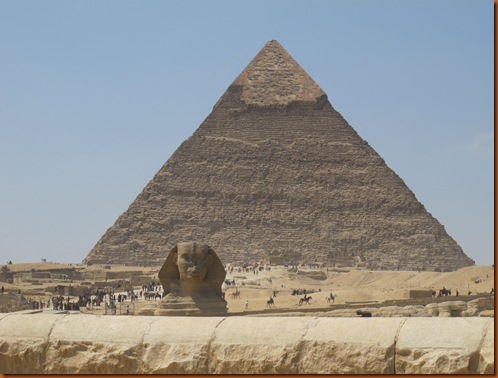 After our delightful camel ride (I really think I need a couple of them) we went to lunch at Cleopatra’s Restaurant. You might imagine my surprise when I walked through the front door to see this: 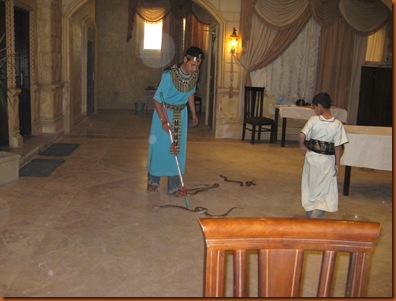 Yes, those would be cobras. When I first walked through the door, one of them was up with his neck spread out. Can I just say? EEWW! It might have been a little more fun if they had been the least bit lively, but the consensus in our group was that they were either drugged or half dead.

For those of you who have been with me a while, it won’t surprise you to know that I couldn’t quite catch my breath when I saw these freaky, creepy, crawly, now I’m not going to sleep tonight…things. 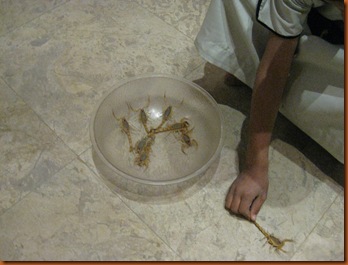 He picked it up and was playing with it!!

After lunch, which was mostly spent playing toothpick tricks with the waiters, we went to the roof to get these wonderful shots: 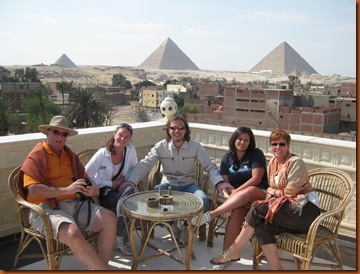 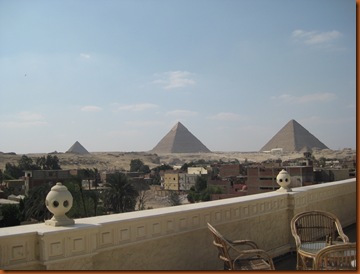 It was after this we finally made our way to the Egyptian Museum. There is no photography inside the museum, so I have no pictures to show you. We saw one gal try to sneak a shot with her phone, and they were all over her.

Inside the museum were tons of artifacts, literally. Huge statues and stone caskets among the biggest. Quite a lot of things taken from tombs and temples are housed in this museum. We were able to see most of the items from the tomb of King Tut (not even going to try to spell that!). For an extra 100 LE (Egyptian pounds) we could have seen his mummy. But for free, we were able to see other, non-famous mummies. And really? one mummy pretty much looks like another.

It was a bit disheartening to see how inadequately kept are most of the artifacts. The museum is very old and not well kept. The cases had only small pieces of paper with a short, typewritten description of what was in the case. Some cases didn’t even have that. Having been to the Smithsonian (a definite must-see!) and seeing how well preserved everything is, it was just sad to see so many treasures in a dark, dusty museum, with nothing to say where they came from.

Even still, I wouldn’t have missed it. The treasures inside are really just that, wonderful treasures.

And that, my dear friends, concludes our trip to Egypt. We had a wonderful time. My favorite part? The pyramids and the camel ride, of course!

Hey Wow, I didn’t forget you: 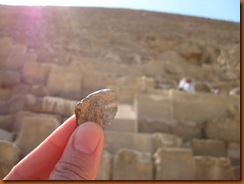