I may have mentioned a time or ten that I love dogs. I believe I would have more than two dogs, if I lived in a kingdom and I were queen, instead of in a democracy where my husband has an equal vote. How am I ever supposed to win, if I can never get a majority?

So rather then run out to the pound every week to bring home dogs, I read about them. There are always interesting stories about dogs. I especially like the ones where the dog has recued a family member or hunted down peanuts at school. The only peanuts my dogs hunt down are the ones that fell in the sofa cushions.

It was the past week I read an article about Giant George, from Tucson, AZ, who was recently entered into the Guinness Book of World Records as the Tallest Living Dog and the Tallest Dog Ever. 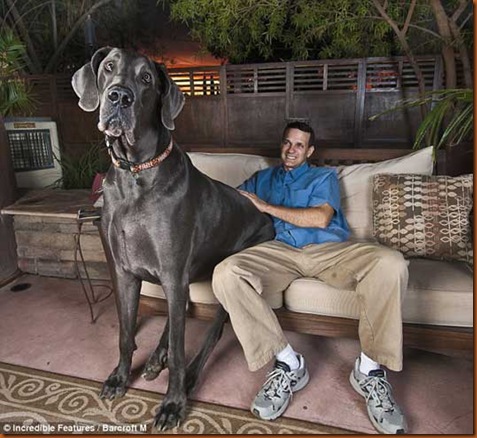 He sleeps on his own queen sized bed and eats over 100 pounds of food a month. He was a guest on Oprah and got to fly to Chicago. He was too big for first class, so got the three seats on the bulkhead in coach. As you can imagine, he caused quite a stir at the airport.

If you would like to read more about George, he has a webpage here and he’s on Facebook.

And as soon as I’m queen, I am so getting one!