I’m not talking Fords or football…

There was a bit of confusion on my Facebook page yesterday when I mentioned I was going to the Falcon Hospital. Given what happened on my last trip to visit CGMan, it is understandable that my friends would think he once again tried to kill me had an accident. Fear not, my friends, we actually went to a hospital that treats falcons.

When the hospital started, they only treated the falcons of the Royal family. It didn’t take long for them to branch out to other falconers in the area. In the beginning, they treated sick and injured birds, but over the years they have taught the owners of falcons the value of preventative medicine. Which is really what every vet wants, right?

The first stop on our tour was the museum. In it, we learned the different types of falcons and the prey they are capable of taking down. We also learned that falcons are not indigenous to this area. Thousands of years ago, the Bedouin would catch the falcon as it migrated south to Africa for the winter. For 14 days, the bird never left the arm of a human, so they would become like family. After that, the bird was taught to hunt. The Bedouins treated the falcons as family, sharing meals with her and never caging her. During the summer it was too hot in the desert for the falcon, so they would release them as the falcons were migrating back north.

Today, falcons are an endangered species, so cannot be caught from the wild. All falcons used in falconry are bred and raised in captivity. While falcons are very strong and extremely fast and can take down a small gazelle, they are fragile birds and are susceptible to stress. Therefore, they are never caged, but always treated as family. Falconers often travel to other countries with their birds for sporting competitions. To streamline and be able to control the falcons, they are now all tagged and micro chipped. Because the falcons are never caged, when they travel, they have a seat on the airplane. And they have their very own passport. 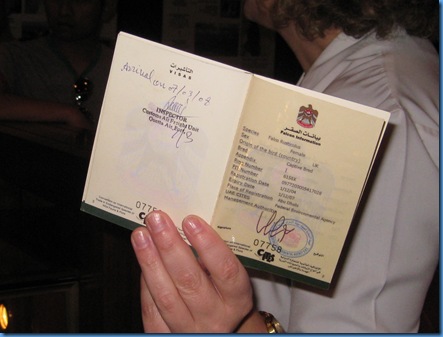 It is stamped upon arrival in any country and also has visas. This is a way to keep track of the falcons.

The falcon (and danged if I can remember the name of the particular one) is the National Bird of the UAE.

As you can see, falcons are very special here.

After the history lesson, we went into the actual hospital. 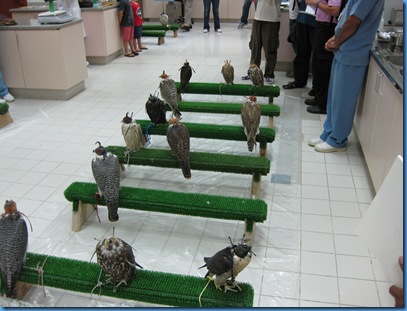 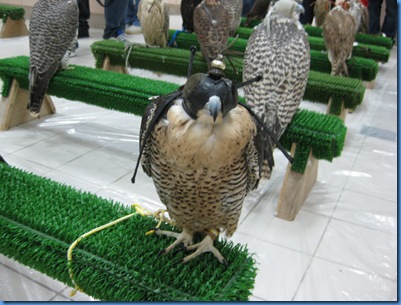 Here are some patients, patiently waiting their turn to be seen. They all have hoods on and are tethered to the perch. This keeps them safe. The reason for the hood is that these birds do not know one another, and if the hood is off, she will see lunch sitting right beside her and attack. While they have a sense of smell, their sight is really what is helping them hunt.

You might have noticed that I have called them all “her”. This is because in the world of falcons, the females are alpha. They are bigger by a third and faster by almost half. Therefore, most of the falcons used in the sport are females.

All of these birds are in for preventative care, such as having their talons trimmed or vaccinations and such. We were fortunate to be able to see a falcon get her nails and beak trimmed. First they give her some anesthetic. Here is an interesting note, the falcon when it comes to, is sharp and ready to go. They don’t have the groggy, dizzy like other animals (and people) do. It was amazing to watch her wake up and be so alert. 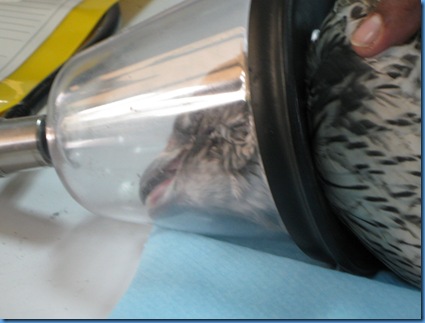 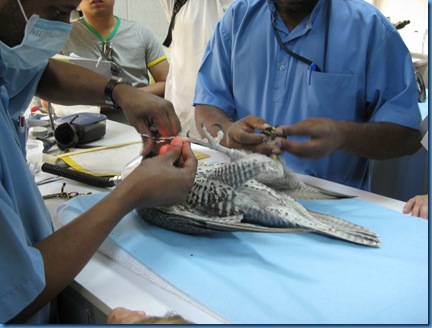 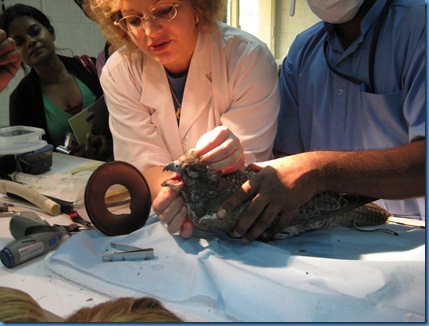 Most of the vet techs are trained in the U.S. and then get their falcon experience pretty much on the job.

After she woke up and had her hood put back on, it was time for us to hold the falcons. 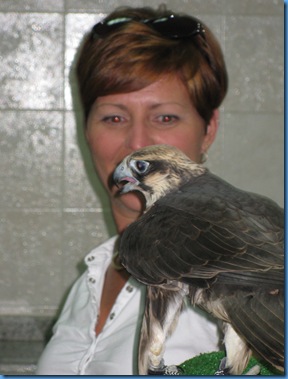 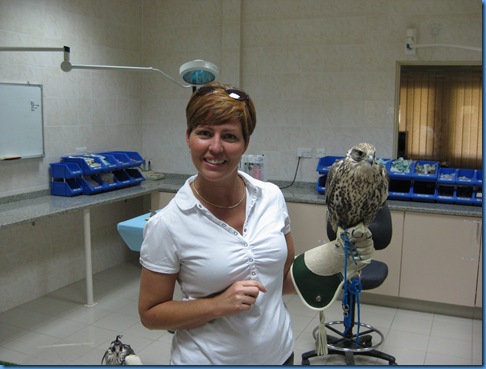 Everybody was lucky enough to hold the falcon. She is heavier than you would think. The females weigh between 1.5 and 3 kilos (for us Americans – that means 3 to 6.5 pounds). She is solid, let me tell you.

Because CGMan was the biggest fella in the room, he was chosen for a special demonstration. He got to feed her!

She was given a small quail (already nicely cleaned, thankyouverymuch) and made lunch of it very  quickly, bones and all. 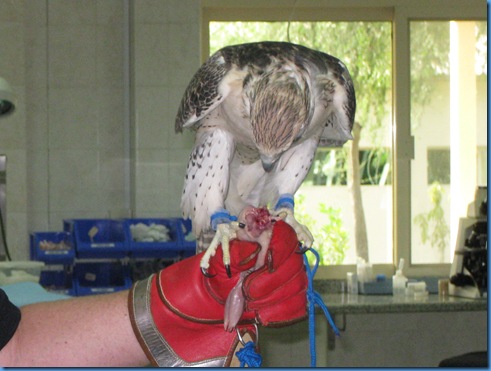 This hospital has won prestigious awards from all over the world for their research and conservation efforts on behalf of the falcon. The doctor that gave us the tour recently discovered a new disease in falcons. It was awesome.

At the falcon hospital, they also board the birds if the owners have to go away or during molting season. Now this is really interesting. The falcon takes six months to change it’s feathers. During that time, they do not hunt. This is also during the summer months when it’s too hot for them to be out. Some owners will take their birds to molt at the Falcon Hospital for six months.

When they do this, it is organized because the birds all have to be put in together at the same time, so they can become a unit. The birds are tethered to where they can see one another, but not be able to reach one another to fight. After a week or so, they are comfortable with each other and become as a family. They then live together in this “flight aviary” (of which there are two on the premises) until they are done molting. 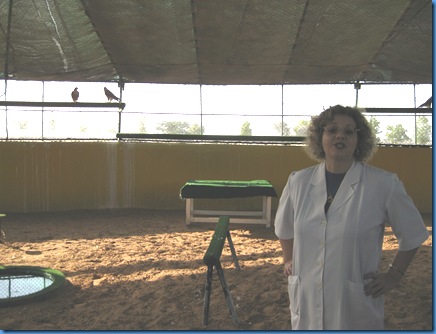 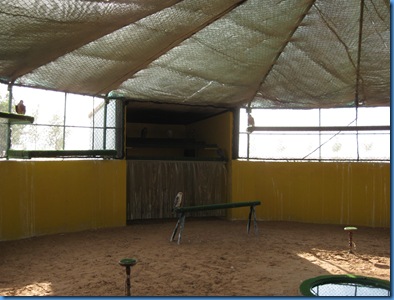 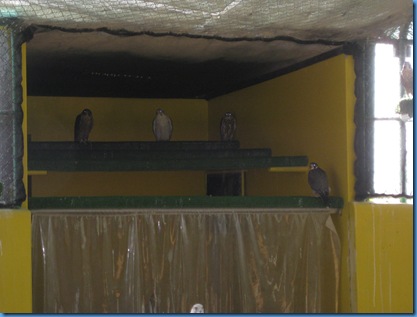 This is a really big tent. It has several perches and two watering holes. The doctor tells us that falcons don’t necessarily need to drink a lot of water because they get their fluid from the meat, but some falcons like to take a bath every day. They are free to do as they choose while in here. Some fly laps for an hour or more. At each end is an enclosed alcove that is air conditioned. This way, the birds are never too hot or subjected to the extreme summer temperatures.

Once the birds are in here, no other birds can be introduced, because they are not “family” and would become prey. If one of these birds should get sick or injured, it could not be re-introduced. Once it’s gone, it is no longer part of the family.  So these birds live together for 6 months or so, get all new feathers and then go home for the cooler months.

So there you have our trip to the Abu Dhabi Falcon Hospital. I hope you enjoyed it, because man oh man, I sure did. 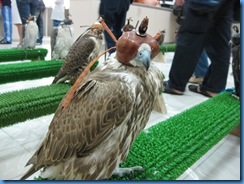 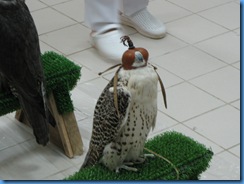 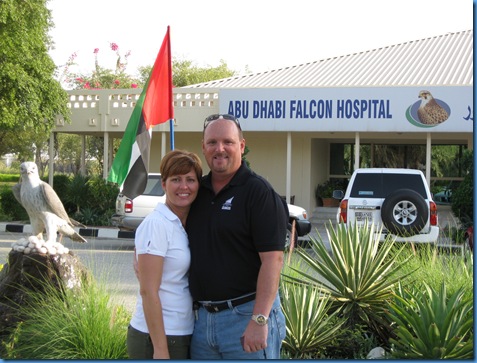 It is my fervent desire that this will be the only hospital we see on this trip. We still have the Dune Bashing adventure yet, so hopefully I didn’t just jinx myself.

P.S. I learned way more about falcons than I chose to bore you with, so if you have any questions, please ask. If I know the answer I’ll be glad to share it.