A little something to chew on…

I love my dogs, I truly do. But there are some days when I want to send them to the moon. For two dogs who generate absolutely no income and really do nothing in the way of helping around the house (unless you call holding the pillows down on the couch helping) they sure do think they have the run of things around here.

They seem to think everything in this house is for their express enjoyment. The vacuum cleaner is something to bark at and chase. The recliner is for their TV watching pleasure, but only if the recliner has a person in it. The humans (that would be me) are for bringing out the food and throwing the wubba. Everything else is purely for entertainment or for chewing on. And the chewing on? That’s saved for only the valuable things, apparently.

You see, my dogs have Alpo tastes on a milk bone budget. They prefer the finer things to chew on. For instance, Zoe chewed the corner off (off!) of a brand new wooden coffee table when she was little. She went under the table and chewed up the shoe of a friend who had kicked them off while we were talking – at the table! I would blame this on puppyhood, but that is really not the case, as she is 3 years old now and recently chewed up the last half of a book I was only halfway done reading.

Don’t think for a minute that Phoebe is innocent of any wrongdoing, for I feel sure she’s the one who knocked the book off the coffee table. She once made toothpicks out of a Longaberger basket. She has made her mark on various photo albums that made the mistake of residing on the bottom shelf of the bookcase. Don’t even get me started on why all my silk plants have chewed up pots with dish soap squirted all over them. Then there was the day the two of them figured out how to open the step lid trash can and proceed to shred everything they found in there.

It was yesterday that I realized how posh Phoebe’s tastes have become, when she bypassed several perfectly cheap pairs of flip flops to get to the heel of a very expensive (and my personal favorite) pair of MBT walking shoes.

I’m thinking she must be a Mexican bulldog or something because she certainly doesn’t seem to understand English. As I went all Achmed the terrorist on her, she just looked at me like “No habla, senora, but thees muy bueno”. 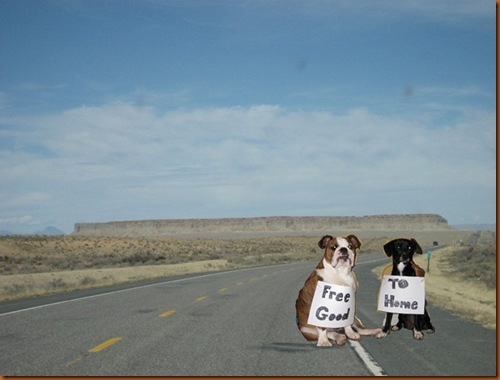 I may have to bring back Threatening Thursdays.