It’s a sad day for weird…

When I woke up this morning, I read an article about one of Austin’s most weird, Leslie Cochran. Apparently, he’s been in the hospital for a week in very grave condition following a head injury.

Leslie is a vagrant cross-dresser and arguably the most locally famous street person, according to local media sources, in Austin. He is an outspoken critic of police treatment of the homeless in the downtown Austin area. Many consider him to be the epitome of the 'Keep Austin Weird' campaign, as demonstrated by his two time run for mayor as well as numerous articles in The Austin Chronicle and local news stations. (Thank you, Wikipedia)

We’ve only lived in Austin for 3 years, but it didn’t take us long to hear about Leslie. At first, we thought our friends were pulling our legs. I mean really, we’d heard Austin was weird, but a cross-dressing homeless man who has run for mayor? And then we met him. You just can’t cruise along 6th street on any given weekend without running into Leslie. Once you meet him for the first time, you find yourself looking for him every time you go downtown.

Our first encounter with him was at the Halloween Parade on 6th street. We were with the Girl and her boyfriend, who were dressed as Hugh Heffner and his bunny. Leslie approached them and wanted to take his picture with them, he said he was prettier than the bunny. He was quite serious about it. There really is no point in arguing with Leslie.

We’ve seen Leslie at various events throughout the city. He could always been seen walking the streets on game day, wearing his trademark leopard thong and cowboy hat. I never saw him in burnt orange, so I’m not sure if he even had a favorite football team.

When our friends visited us last year, we made a pilgrimage down 6th street (read: pub crawl) and happened to run into Leslie. He’s hard to miss. CGMan and our friend P-bert, who has a brother-in-law named Crash, really wanted to have a picture with him. Leslie never says no to a picture. P-bert still asks about Leslie. Like I said, he’s hard to forget. 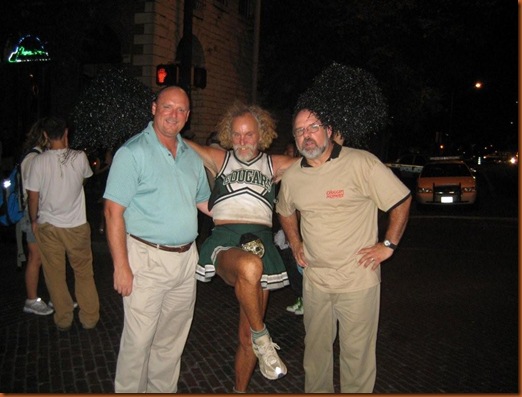 Leslie, I hope you know we’re sending healing thoughts your way. Austin just won’t be weird without you.