Okay, this isn’t funny anymore. Not that being scared of  a scorpion and having to call your BFFs husband to come over in the middle of the night to kill it is funny. Well, maybe it was funny to Brian, especially when saw that I had locked it out.

Having another scorpion is definitely not funny. This one was only marginally smaller than the first one. I don’t understand why they have to be right there next to the door, looking all villainous and creepy. But I want you to know I’ve grown since the last time. I was not afraid. Okay, I was afraid, but at least it was daytime and I was able to think rationally. My first thought? Damn, Brian’s at work and I’m pretty sure only my own husband leave work to kill a bug for a me (and that’s very optimistically hopeful on my part).

Luckily my exterminator man, Rick, was here just the other day. I had shared with him my previous scorpion melodrama dilemma. He assured me, should I encounter another one, that spraying it with wasp spray from several feet away would kill him dead. Or a fly swatter. Um, Rick? No. But the wasp spray? I have some of that, so I am armed and ready.

Only now, I have to walk past the scorpion to get to the wasp spray. As I hurried past, I kept this mantra in my head “theydon’tjump,theydon’tjump,they.do.not.jump.” I grabbed the spray can and let loose, fully expecting the thing to just drop dead. He did not. He looked pissed off. So I sprayed him again. Now he looked pissed off and not feeling so good. After a third shot at him, he finally fell off the wall and writhed on the ground for another 3 to 4 minutes. I’m not lying! He was not dying! (ooh, I rhymed!)

Finally, he was barely moving, (but I swear to gawd. still. moving.) and I was able to scoop him up in a plastic cup and toss him over the fence. This is also no lie; I was shaking and having the hibbiest of jibbies the whole time. I was more worried that I would shake so much he’d fall out of the cup. bwaaah! 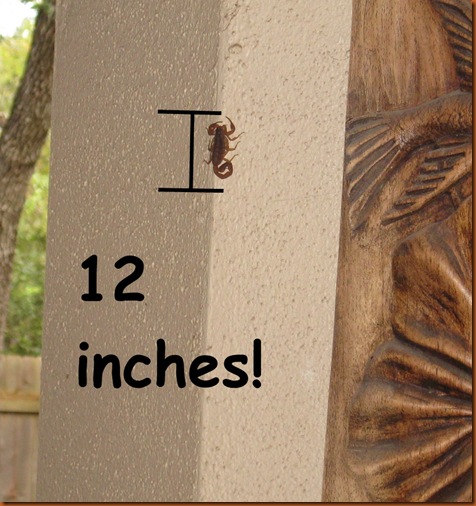 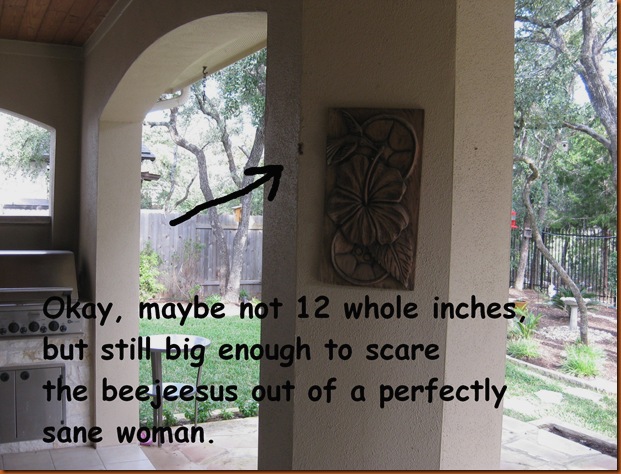