For Wordless Wednesday, I was going to show a picture of a sign proclaiming the dangers of cancer causing agents in the components of what the sticker was stuck on. It was stuck on an SUV. I saw quite a lot of those stickers in California, on SUVS, on cars, on the doors to stores. Apparently California knows everything causes cancer, and they have to warn you of it.

But I’m not going to show that picture because last night I had a visitor. A scary visitor. A visitor so scary, this scared-of-nothing-single-mom-of-three-who-never-had-to-call-for-help-before had to call for backup. There are really only two things that send me screaming through the night; tarantulas that are not in boxes and scorpions. Oh, and bees in the car. But that makes everybody scream, so it doesn’t count. 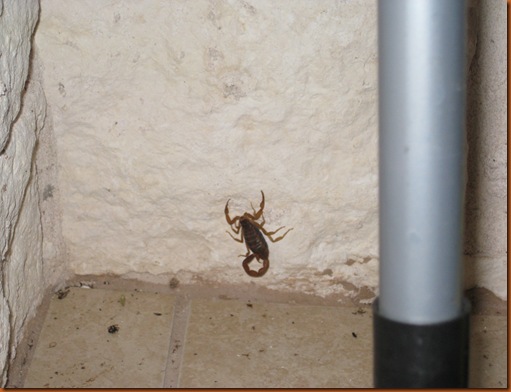 I was coming in from letting the dogs out last night when I saw this ginormous prehistoric looking arachnoid right on the door jamb, headed into the house! I screamed like a girl, ran in and slammed the door. Then for good measure, I locked it.

I walked around freaking out, wondering what to do. I have no Raid inside (does Raid even kill them?!), it’s out on the patio where he is. I’d have to walk past him to get it. Do they jump?! Hell no, I’m not going back out there. I was even rational for about 2 minutes and realized that I am in the house and he is out on the patio. I should be safe, right? Well, no. He’s still alive and still wants in the house and I have no doubt he will rush me the minute I open the door again.

So I did what any scaredycat girl would do who lives alone with two useless dogs. I called my BFF to ask if I could borrow her husband. I had hoped to have a minute to work out my panic with her on the phone, but the husband answered. It was all I could do not to go “EEEEEEEEEE” right into his ear at 10:00 at night. I’m embarrassed to say I had worked myself into a bit of a frenzy. He was ever so nice and walked me through it, finally asking me if I wanted him to come down and take care of it. Yes, please.

While I’m waiting for him to come down the street (for the love of Pete, is he crawling down here?) my BFF is on the phone with me, as I’m looking at the scorpion - from inside the house. She asks me how big, because when she says they’re big, her husband always says they were little ones. I tell her he’s big. The biggest one I’ve seen since moving to this gawdforsaken place that has scorpions and tarantulas that live in the yard.

Here, let me remind you how big: 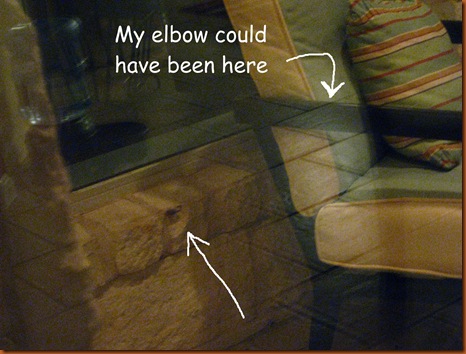 The nice husband finally sauntered down to take a look. The first thing he notices is the locked door. “Really? You locked the door? You know they can pick the lock, right? With that little thing on their tail?” He is so going to h.e.double l. for that.

Of course, he says it’s not that big. For crying out loud?? How big does it have to be to qualify as big?! I stick my head out the door, take one quick picture before cootie crawling back into the house. From out on the patio I hear him ask, “Do you want it dead or do you just want it gone?” He’s kidding, right?  That would be a DEAD, PLEASE! I hear some stomping and wielding of a small garden rake.

Him: We’re working on it.

OMG, working on it?

Finally, the thing was dead. I made him show me the dead body before throwing it over the fence. There is no way I would have slept if I had even the smallest notion that it might have survived its injuries. Just telling this story has given me the hibbie jibbies all over again. *shudder*

I just want it noted for the record, that when I was a scared-of-nothing-single-mom-of-three-who-never-had-to-call-for-help, I lived in a place that had neither tarantulas nor scorpions!

P.S. To All Things BD, I think he beat yours.