That man is richest whose pleasures are cheapest…

I must be the richest gal around, because my pleasures are chee—eep! It has never taken much to amuse me or to make me happy. 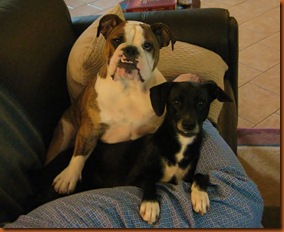 When the kids were little, we lived with Wow (that’s a nom de guerre for my mom who wishes to remain anonymous) for several months while I was getting back on my feet. The time spent at her house was filled with hundreds of pleasures and all of them dirt cheap. It brings to mind  monotonous monopoly games, hours of charades and twenty questions, pranks and other tomfoolery. I wouldn’t trade that time for all the money in the world. I guess that makes me rich, doesn’t it?

When we lived at Wow’s, the Skater was a long way from being a skater. He was barely a walker at that time. On her back porch where we used to sit and watch fireflies (another totally free pleasure!!) was a hole in the cement. I don’t know how the hole got there, but it was there and the Skater, who was 3 or 4, was fascinated with it. He was convinced that a frog lived in that hole. Wow was pretty sure a frog wouldn’t want to live in a cement hole in the middle of a patio. But every night, l’il Skater would go out and talk to his “imaginary” frog in the hole. One night we went out early enough and damned if we didn’t see a frog scamper back into that very hole!

Of course he had to give it a name, Fred, and it became part of the family. While shopping one day, l’il Skater saw a frog house. He insisted to his grandwow that his frog needed a house, that Fred shouldn’t have to live in a cement hole in the middle of the patio. The frog house was purchased and placed with care in the flower box near the section of patio that had the hole, with the hopes that Fred would move over to his new digs. That didn’t happen. Another frog moved into the house and Fred continued to live in the cement hole in the middle of the patio.

All of this brought such pleasure and joy to me. It had been such a long year and I still had so far to go. To come home from work and hear the antics of Fred and his neighbor, while watching the other two kids catch fireflies….well, I was getting richer by the day.

Fast forward 16 years. Skater is a real skater (with the scars to prove it), the Girl is all grown up, and the Marine is married to his Sunshine and the only “grand” I have is a cat. Wow lost her husband a year ago and is selling the house and moving to Kentucky.

I drove up there to help her pack and make the move. While boxing up stuff from the patio, I came across Fred’s frog house. I hadn’t seen it in years. She told me he never really liked it, that he much preferred the hole in the cement. I asked her what she was going to do with it, since she was moving to an apartment. She looked at me rather knowingly, like moms do, and asked if I wanted it for my new backyard. Well, of course I did! Now I have a frog house, all I need is a frog.

Because I’m a google geek, I had to google frog houses to figure out where to put it and how to make it attractive so a frog would want to live there. I learned you should set it over an existing frog hole. Okay, here’s the deal. I live in Texas. Frog holes look just like tarantula holes. Checking the holes for frogs? Not gonna happen. So I just set it out in the middle of the mulch, mostly because it was cute and had such very happy memories attached to it.

Today, Skater was spreading mulch for me and look what he found! 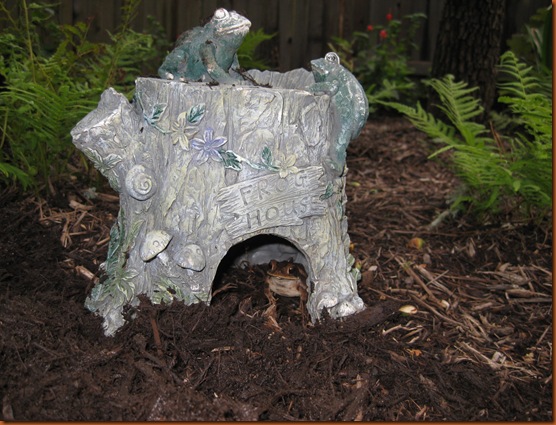 He ran in to get me, knowing I would find joy in a little frog in a silly little frog house. I laughed and squealed, took his picture and then ran in the house to call my Wow. After sharing the news with her that I finally had a resident in the frog house and laughing over the memories of Fred and l’il Skater, I gave my big Skater a hug and thanked him for making my day. He laughed and said he was excited, too. He said he knew I would like it that Fred had finally moved into his house.

I’m pretty sure he’s going to be a rich man, too.