It was a very good year…

The year is 1944. It started on a Monday and was a leap year. On the Chinese calendar, it is the Year of the Monkey.

The year was busy with WWII events, such as the Battle of Normandy, D-day, the capture of Anne Frank, an assassination attempt on Hitler, the beginning of the Warsaw Uprising to name only a very few.

But there were a lot of good things about 1944, as well. For instance, Silly Putty was invented. Where would we be without the bouncy, stretchy, copy the funnies, squishy but not sticky, malleable blob of putty? Oh! another great invention that will probably save mankind – the Mai Tai. Okay, maybe not save mankind, but tell me? Doesn’t a nice fruity drink with a little umbrella make you want to make love, not war? There you have it.

This is the year Roosevelt was again voted President of the United States, becoming the only president to be elected for a 4th term. As president, he signed into law one of the most significant pieces of legislation  ever produced by the US government: the Serviceman’s Readjustment Act of 1944, commonly known as the GI Bill.*

Scientists at Harvard constructed the first automatic, general purpose digital computer. This will have much relevance in my life later on, especially considering my Dad has been in the computer biz as far back as I can remember.

Smokey the Bear was born in 1944. He was brought to us by the Forest Service to help educate people about the dangers of wildfires, since most of the firefighters were out fighting the war. 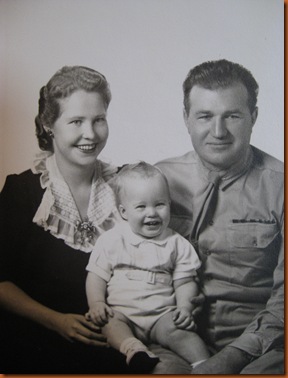 That sweet cherub in the middle is my Dad!!

Tomorrow, September 5, is his birthday!

This song was a favorite in 1944. I know my Grandma must have sang it to him, just as I sang it to all my babies. (I’ll sing it to my grandbabies, too!)

Mairzy Doats   by The Merry Macs

Yes, it was a very good year, indeed.