It snot what you think it is…

This trip to San Francisco was CGMan’s anniversary present to me. We have been married 13 wonderful years. It’s been during these 13 years that I have discovered my love of travel. Driving trips were the only traveling I had done, and while I do enjoy a good road trip, being able to go to faraway places, like Greece and San Francisco seemed like impractical dreams, so I put them on my bucket list and figured it would happen…some day.

We’ve finally reached the point in our lives, now that the kids are all on their own, that we can start crossing some things off that bucket list. San Francisco and wine country have always been on my list. And, any self respecting cow lover wants to go see the happy cows, right? Well, they live right here in California! 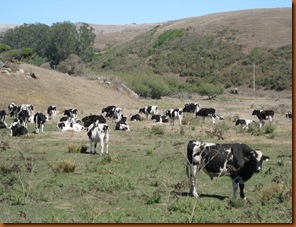 You can’t tell from the picture, but they are cracking up! As with most species, the male is a constant source of amusement to all the females in the proximity.

When we were planning the trip, CGMan asked if there was anything in particular I would like to do. You know, beside drink wine. I told him I had never been whale watching, could we do that? Even though I had never been, I did know that one usually goes on a boat to see the whales. He mentioned he knew a great spot to go whale watching. That didn’t sound like a boat to me.

For the next couple of weeks, as we were preparing to go, I was giving him hell about the whale watching, because I knew on the boat, we would be guaranteed to see whales, but sitting on a cliff somewhere, we could only hope they would be passing by.  CGMan promised me that if we didn’t see any whales while on the cliff, he would take me on a boat, sometime in the future, to see the whales. I told him I would prefer a Princess boat on the way to Alaska, thankyouverymuch.  I’m mean, if I’m going to watch whales from a boat, might as well throw in a buffet dinner and a lounge act.

We drove to Bodega Bay along the Pacific Coast Highway. Oh, it was so beautiful!! We stopped for an average lunch that we paid above average prices for, (I am constantly amazed at how expensive it is here) but did manage to score an awesome bottle of wine. We didn’t finish the wine at lunch because it wasn’t a lunch worth lingering over, so we corked it up and took it with us to the cliffs. I guess in wine country, this is perfectly acceptable. 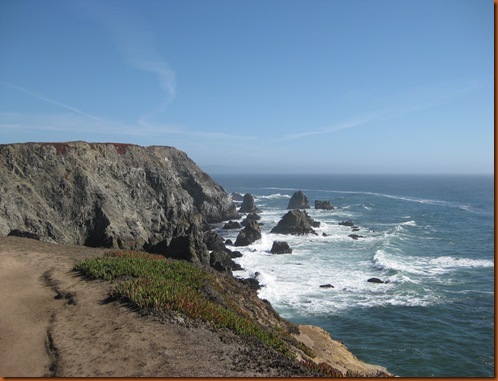 We found a nice little sandy spot next to the edge and sat down to wait. I noticed a tarantula sized small hole near our blanket and wondered if it was a crab hole. Because if a big ole crab were to come out of that hole while I was sitting on the edge of a cliff, I was liable to run fall screaming off the cliff side. Why do men think that’s so funny?

While we were waiting for the whales to come swimming along, we were drinking the fabulous leftover wine and making pleasant conversation. Then, because I’m such a smartass, I checked my watch and asked, “So what time do the whales come by?” when really I was wondering how much the cruise line charge for a room with a balcony. No sooner had the words left my mouth when CGMan saw a huge plume of what I can only assume is whale snot shoot up in the air.

We both squealed as I grabbed the binoculars and lo and behold, it was a whale!! It was magnificent. I can’t even begin to describe it, but it was there and I saw him. He surfaced a few more times, blew some more snot and then dove under and we didn’t see him again. We saw a couple more while we were sitting there and it really was such fun. Actually, it was probably more fun sitting on a cliff, drinking wine on a beautiful day than it would have been on the bumpy seas and having whale snot land right on me.

Tomorrow, we’re off to the wineries. Oh, lordy.