As we left the airport to drive to our lodging, which is on a Coast Guard base in Novato (Thank you military, for the perks we have) that is just a short drive north of San Francisco, CGMan was so excited to show me the Golden Gate Bridge. 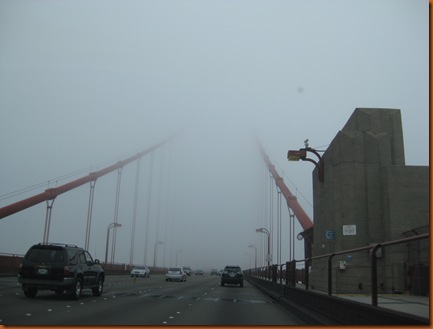 I was all, “It’s not as big as I thought it would be.” We drove and drove, but I didn’t see it. He let me know that fog is a part of San Francisco. We could actually see the fog bank over the ocean, he says that stays there all the time.

Yesterday started out foggy and cold, but turned into a beautiful, clear balmy day. We were very happy for that as we had planned a trip to The Rock. That’s right, Alcatraz. It was wonderful! The audio tour was fantastic and chock full of history. I especially liked that the narrators were former guards and inmates. 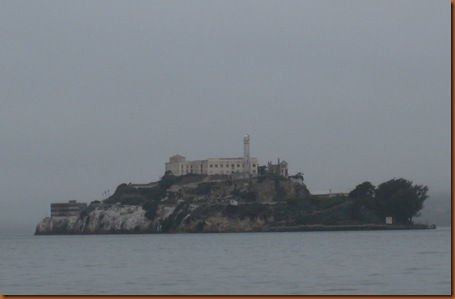 Before we left for the island, we walked around Pier 39. It is a touristy place with lots of shops and places to eat. We had some fabulous sourdough French toast (Don’t worry Jenny, I was told calories on vacation are negative calories, so we’re good, right?) and Bloody Mary’s. Its days like this when its good to be a grown-up. After the big breakfast, we had time to kill so walked to the end of the pier and saw this spectacle: 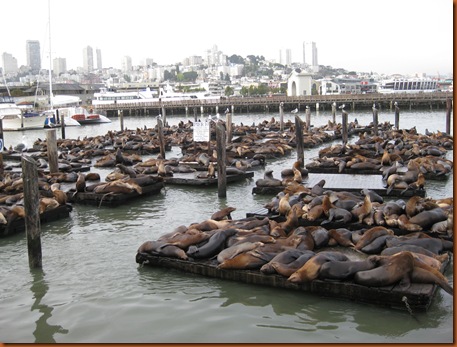 I could have watched the sea lions all day. They may look like they’re sleeping in this picture, but I assure you, they were not all sleeping. There was plenty of jockeying for position, a little bit of mating and lots of name calling going on. It was loud and raucous. As I watched, I realized they were like dogs that live in the water.

After our trip to The Rock (every time I say this, I can’t help but relive the memory of the Marine when he was 13 or 14 when the movie The Rock first came out on VHS. He wanted to rent it but it was out, so he kept calling to see if it was in yet. Worried that the rental dude would recognize him, he kept changing his voice, every time he called. “Excuse me, do you have The Rock?” it was quite hilarious as his voice hadn’t changed yet, so he was just a kid putting on a Scottish accent.) Anyway, after our trip to The Rock, we rode the double decker bus around the city, and I finally got to see the Golden Gate Bridge, up close and personal: 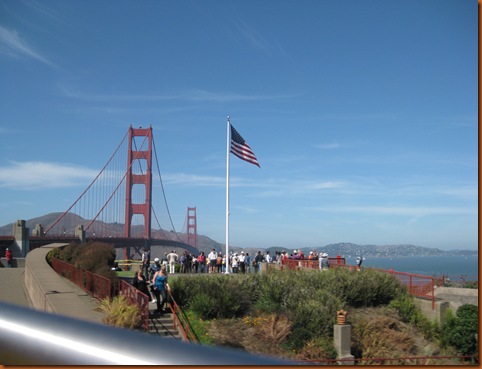 It really is a beautiful city. While I enjoyed looking at how people live here, I am a suburbanite and just can’t imagine having to drive around several blocks from my home just to find a place to park. Besides, I have bubble issues; I don’t like anyone in mine.  Another problem I have is heights and I gotta tell you, driving those streets that have more of an incline than my favorite roller coaster gave me a major case of the hibbie jibbies. I’m not sure I would be able to navigate the streets with my eyes squeezed shut.

My favorite part yesterday? The sea lions (I’m a sucker for animals) and eating Chinese food on a balcony in China Town. 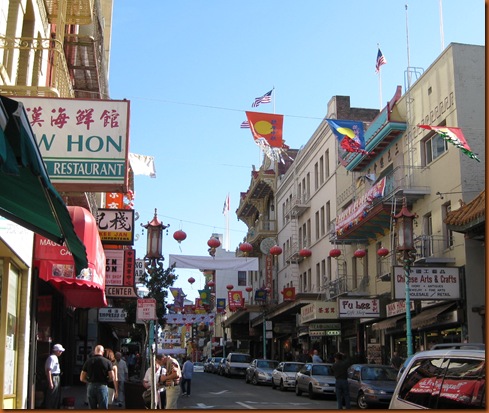 Today, we are on a road trip. Surprised? I didn’t think so. We are driving through Muir Woods so I can see the redwoods and then along Pacific Coast Hwy to Bodega. Hopefully, there will be some whales to see as we picnic on a cliff.

We’ve stopped in a little town, Mill Valley, to make use of some free internet (I was having some painful withdrawals). Looking around the coffee shop, I’m seeing a lot of business being done by men in short and sandals. That must be what they mean about California Dreamin…

P.S. I did not ride a cable car, but sang to CGMan as we were driving down the crookedest street in the world.