…the first traffic light in America began operating in 1914 in Cleveland, Ohio?

…TBDBITL (for those of you not familiar- The Best Damn Band In The Land) was formed in 1879 as a military band? I knew there was something special about them!

…the greatest rivalry in college football, Ohio State – Michigan, started in 1897 when Michigan was victorious over Ohio State, 34-0.

…that Ohio State has the largest enrollment of any college in the US and the largest campus?

…Brutus the Buckeye was one of the first mascots that was not an animal?

…that 50% of the United States population lives within a 500 mile radius of Columbus?

…that no self respecting Ohio hostess ever put out a Christmas cookie tray without homemade Buckeye candies?

…that I brought home one box of Anthony-Thomas (only the very best!) Buckeyes for one of my lucky readers?

All you have to do is tell me how you are six degrees from Ohio. Included with your box of “Officially licensed by The Ohio State University” Buckeyes, is a recipe card for Buckeye Candies. You will impress your friends and co-workers when you add these delectable little morsels of heavenly goodness to your holiday trays. 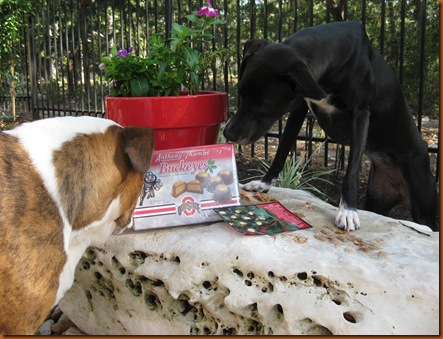 Everyone will want your recipe!

Enter now for your chance to start a new Buckeye tradition in your home!

* in the event the winner is from “that state up north”, candy will be sent in a plain brown wrapper.