…olive oil, that is! And make that Extra-Virgin!

On our traumatic exciting trip to Greece, we had the pleasure of having an olive farmer come talk to us at the hotel. We learned quite a lot about the history and making of olive oil. And if he hadn’t been drunk off his butt, we might have learned even more.

I was able to pick up some more tidbits from Wikipedia:

Greece devotes 60% of its cultivated land to olive growing. It is the world's top producer of black olives and has more varieties of olives than any other country. Greece holds third place in world olive production with more than 132 million trees, which produce approximately 350,000 tons of olive oil annually, of which 82% is extra-virgin.

Olive oil is used medicinally for peptic ulcers, lowering cholesterol and even blood pressure. Most of the religions use olive oil in their rites. Olive oil is used in cosmetics and can be used as a shaving oil. It is even used by some to reduce ear wax buildup.

Olive oil has more uses than just consuming, it also works as a natural and safe lubricant. For example, lubricating the machinery that is used within the kitchen (grinders, blenders, cookware, etc.)

Homer called it "liquid gold." In ancient Greece, athletes ritually rubbed it all over their bodies. Olive oil has been more than mere food to the peoples of the Mediterranean: it has been medicinal, magical, an endless source of fascination and wonder and the fountain of great wealth and power.

Me? I like to drizzle it over tomatoes and cucumbers.

Our drunken farmer brought along some olive oil from his farm. The farmers routinely set aside some of their own pure olive oil to sell locally. This is the best tasting olive oil! Because it hasn’t been mixed with other olive oils for export, it is just so pure and good.

I wish I could say I bought each and every one of you a can of this amazing olive oil, I didn’t. But I would have, if I had unlimited weight allowance in my suitcase. So blame the airlines. I did the next best thing…I bought a can for me and an extra one for one of you. 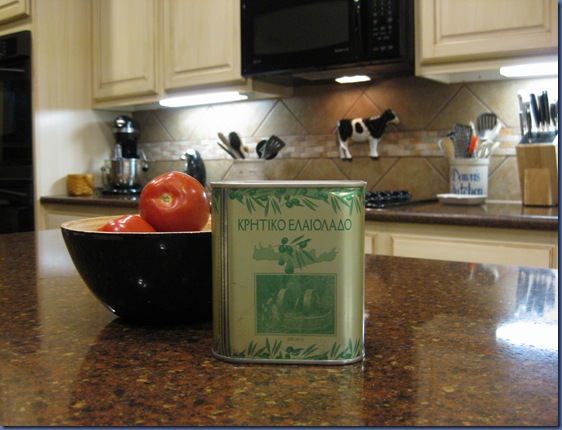 Just tell me what you would do with this wonderful olive oil that I hand carried all the way from Greece. Feel free to share a favorite recipe, if you like. I will have a random drawing on Thursday and announce the winner on Friday.

I can’t wait to hear all the ways and uses for this olive oil.