Saturday was the 4th of July.  I may have mentioned that having a flag in the yard is a very big deal for me. We went to the hardware store ,where I had seen the flags, to get one of the poles you stick in the ground. I decided I needed a flagpole in our little yard piece of America. 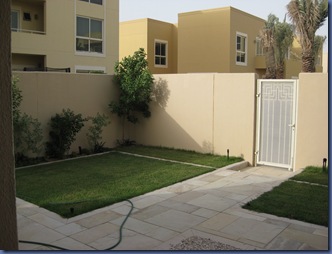 As I was looking for a flag to go on my new flagpole, CGMan was reading the specs on this new flagpole. He said to me, “Honey, I don’t think they’re going to let you have this in the backyard.” I was all “WHA?!” He saw the tears starting to well up with the thought that I might not have a flag for the 4th of July. He said, “Hang on, let me make a quick phone call.” He did. And he was right. Apparently, one cannot have a 20 foot flagpole in their yard little piece of America, because it is against the rules of the complex. Personally, I think it would look great if everybody had a 20 foot flagpole in their little backyard with the flags of their country (and our host country, too)! But I don’t get to make the rules here. Hey, I’m not complaining, at least I get to drive and wear my own clothes. 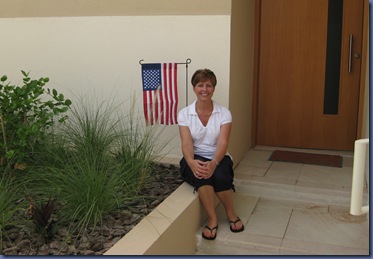 Being the good sport that I am, I compromised. I still have a “flagpole” in my yard, it’s just not 20 feet tall.

Last night, we dressed up to go to a 4th of July celebration hosted by the American Chamber of Commerce. (The US Embassy holds their celebration in Feb when it is cooler- they must have an outdoor affair) It was something special for us in more ways than one. One being, that we both stepped outside the norm and went to a big function where we did not know a single soul. We realized if we were going to live here, we were going to have to meet some people. This seemed like a good opportunity. And it was.

We were told it was open seating, so after cocktails, where we met a few interesting guys and a fellow Austinite, we ambled into the ballroom to take our seats for dinner. We wandered and wondered where should sit. We finally just sat at a table next to the wall and hoped for the best. And it was.

Turns out, it was one of the Embassy tables. The man who sat next to CGMan is in the Air Force and is in the liason office, which is the office CGMan was in charge of when we were in Trinidad. Anyway, once we realized our mistake, we tried to leave but he said to stay right there, he would vouch for us. Cool! 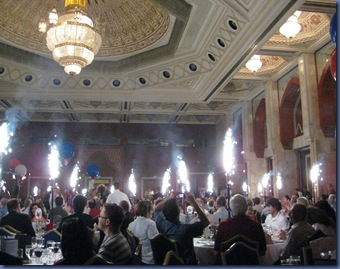 It was great! The Marines from the Embassy were the color guard and everyone sang the Anthem- out loud! The speeches were short and all who spoke thanked our service members, which is more than I can say for another Ambassador, in another country, at the beginning of the war, but whatever, water under the bridge, right?

Someone asked me if there would be fireworks, knowing it was inside, I knew there wouldn’t be. Imagine my surprise when the sparklers went off right on the tables!! It was quite a sight! Later in the evening there was an explosion of confetti. They really do know how to throw a party.

Dinner was an International buffet. It was so good. They even had hamburgers and hotdogs!! You gotta love it!

Since CGMan and I had come out of our shell, we decided to work our little corner of the room. I will say, we’re pretty good at that. He met the man he spoke to on the phone, who told us about the event and I talked to the man next to him. And so it went, meeting new people. That’s how we made several new acquaintances! And almost all of them said they would be glad to hang out with CGMan until I can get back here for good. I was glad for that. I also learned there are plenty of women’s groups for me to participate in once I get here full time. I was so worried about that. Now, I’m anxious to get here and get started. (Not that my women’s group back in Austin isn’t the bestest in the whole wide world! Hi girls!!) 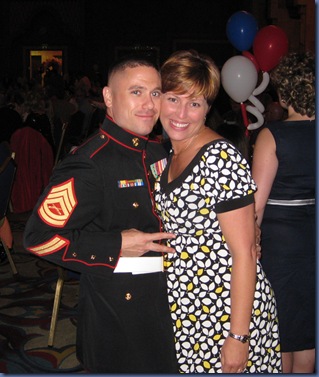 But my favorite part of the whole evening?

I got to hug a Marine!

For those of you who don’t understand, let me explain: Marines are brothers. All of them. Being a Marine Mom is very special. And as such, I get to hug any of my Marine’s brothers, all I have to do is ask. They all know about Marine Moms, and how we need the hugs sometimes, so they do so willingly, enthusiastically and with a smile. It’s awesome.

I hope you all had a wonderful and safe 4th of July. It’s nice to know that even in other countries, we are still free to celebrate our Nation’s Birthday.