We heard that Greece has 20,000 homeless dogs. The dogs are very friendly and usually  “neighborhood” dogs who are fed by everyone.

Before the 2004 Olympics, they were rounded up, sterilized, and sheltered during the games. After that, they were returned to their various neighborhoods.

What I find interesting, is how big these dogs are. Trinidad was overrun with stray dogs, pothounds, as they were called. They were small dogs, usually varying in size between a Chihuahua and a Jack Russell. There were plenty of big dogs there, like Rottweilers, German Shepards and Pit Bulls, but they were used for security. The stray dogs were all smallish.

So it was a surprise for me to see so many large stray dogs. Big dogs eat a lot. I guess the saying here is, “It takes a village to raise a mutt”" 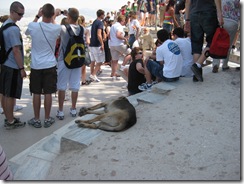 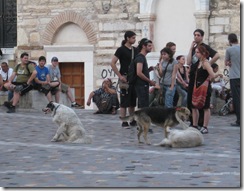 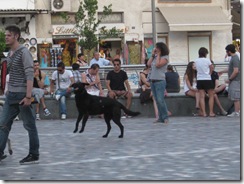 This one was chasing bubbles, with not a care in the world.

I wish I had thought to take pictures of all the dogs we saw. I should have been thinking, “Blog stuff, blog stuff” but, I had that post traumatic stress/pain pill/ouzo thing going on.

I hesitate to show these to my girls, lest Phoebe decide she wants to be a Grecian Bulldog. Opah!!

The dogs were all very friendly and didn’t seem bothered by the gazillion people traipsing around their city. I love dogs, so it was fun to see them all enjoying the good life. Whoever said “It’s a dog’s life.” didn’t see the happiness of dogs living in Greece!