Austin is to Al Ain as Dallas is to Dubai…

The weekend before I was to come home, we did one last little road trip to the small town of  Al Ain. I loved it there. Let me describe to you, a geographical analogy, if you will, of this whole area, so you will know why I loved Al Ain.

Now we come to the meaning of all this: Al Ain is small, laid back, unpretentious and far more pretty than any of the big cities. You guessed it! It is very much like Austin! Only without the hippies. 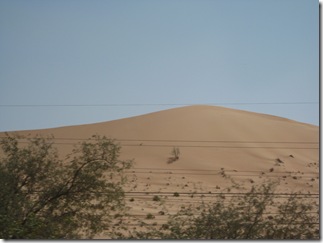 This is what we saw alongside the road. Sand. Lots of sand. Between Abu Dhabi and Al Ain, there are no towns or cities, so therefore, no exits. You pretty much have to go the whole way to make a U-turn. 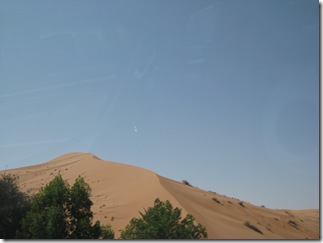 It was then that I really had a feel for the desert. Back in the days of caravans and camels, the trip from Abu Dhabi took 5 days across this desert. Now, in the air conditioned SUV on a well paved highway, 1 1/2 hours. 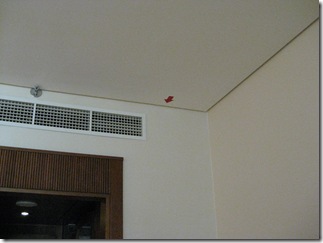 This is my first time in a hotel since I arrived. I noticed right off, the arrow in the corner. It shows the way to Mecca. You know, I can’t make jokes about someone else’s religion, but I can tell you how stupid I felt when I told CGMan that the arrow was pointing west, and we all know Mecca is to the east. He smiled a very patient smile and reminded me that in the US, Mecca is to the east. But we are on the other side of the world and Mecca is now to the west. Well, duh. 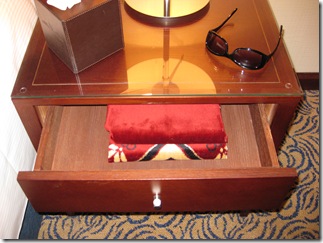 And in the drawer would be the prayer blanket. I can’t tell you how big it is, because I didn’t open it. It’s pretty, though. 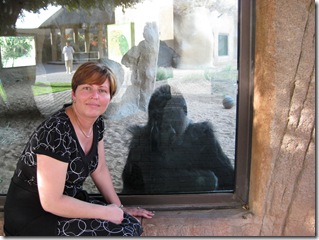 Then it was off to the Al Ain Zoo, where we made a few friends. The zoo was really nice. One of our road trip “things” is to go to zoos in the towns we visit. (You know what they say: never stand too close to your skinny friends) 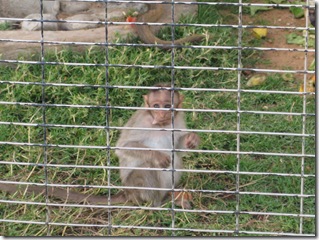 This was a very clean zoo and had plenty of attendants. It was feeding time and a little bit cooler in the early evening. This little lady is “with child”. I’ll bet her mom is so happy! 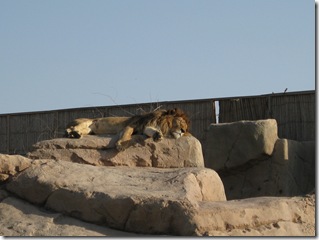 This guy woke up and wondered where the heck his dinner was. Yeah, we all heard you, mister! His roar really is very loud! Then, knowing that his needs had been voiced, he fell back asleep, content in the knowledge that his will be done. Kings, right? 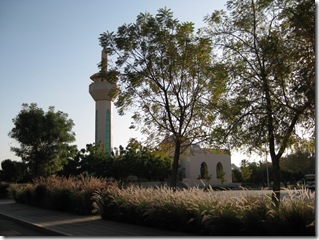 This was really cool. It’s a mosque, right there inside the zoo. There was a call to prayer while we were there. It was interesting to see families headed that way. That is another interesting thing about this part of the world, this culture. They are very family oriented. We saw quite a lot of families on this day, having picnics in the zoo.

The next morning, we got up bright and early because I wanted to go to the camel market. Not that I was in the market for a camel, but if I ever became interested in purchasing one of these “ships of the desert”, I wanted to know where to go. 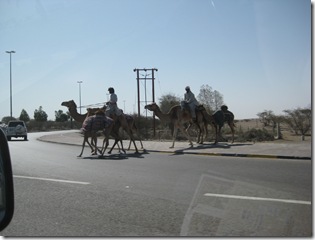 Unfortunately, we got lost. We thought we might be in the general area when we came upon a roundabout (they are everywhere in this country! personally, I like them, but that’s another story for another day) So…we’re going through the roundabout, and out of the desert walks this little caravan! Apparently, camels have the right of way in the roundabout.

Here we are at the camel and livestock market. First, let me tell you about what I saw. I could not get my camera up in time, so I don’t have a picture. There was a small two door sedan in front of one of the stalls. The driver was still behind the wheel, with his door open, while his friend was trying to shove a goat into the backseat. Now, I’m pretty sure he didn’t pick this goat up to surprise the kids with a new pet. No, this was dinner! And let me tell you, the goat knew it. He was putting up a brave fight. 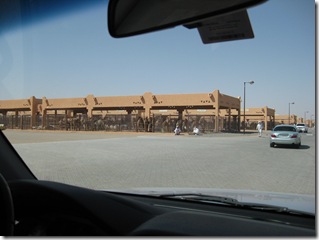 So, on to the camels. When we pulled in with our rental car and white skin that screamed TOURIST! a very friendly fellow came up to our car and introduced himself. We’ll call him Jeff. Jeff gave us a lovely parking space in the shade and then gave us the grand tour. of. every. camel. there. 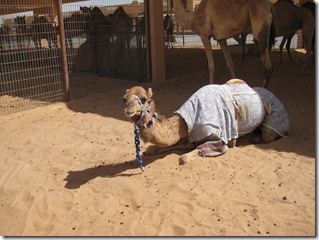 Like this one. All the while he is talking very fast. I am only catching every other word or so. Of course, his first question is where do we come from, Germany? 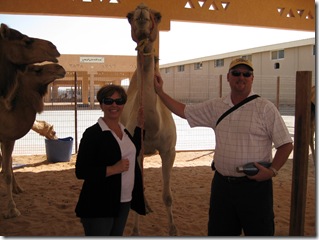 See? CGMan could be from Germany, right? Jeff kept wanting to take our picture. With.Every.Camel. I mean, they’re cute and all, but standing next to one camel, is the same as standing next to the other camel. Right? 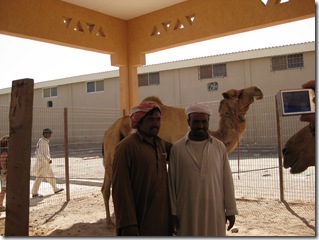 This is Jeff’s friend. We’ll call him Mutt. Mutt and Jeff dragged us all around the camel market, taking us in the stalls, grabbing the cameras and saying “123!” to indicate we were to pose for yet another picture with the camels. Because they seemed only interested in taking our picture and talking real fast, I didn’t get to find out much about camels. Like, which ones are racing camels, and which are for eating (yes, they do eat camels during feasts and celebrations). They did tell us about one of the big camels that was tied up. We couldn’t understand what Jeff was saying. Was it a bull camel? No, not ba-uhl camel. We never did figure out what he was saying, but his friend Mutt came up and said “This camel is the best camel, very expensive camel! It is the f*cking camel!” Apparently that is not a bad word here, it is a deed. And this camel was the best at it, so was very expensive, 1 million durhams. 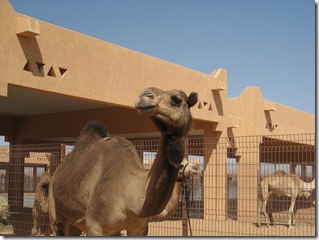 This is a Pakistan camel. I know this because it has a darker coat. That’s about all I know because it was time to take another picture. 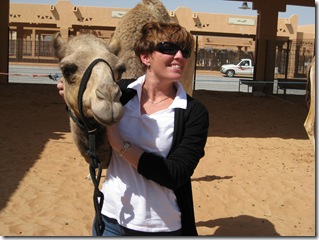 But she happened to be my favorite, so I didn’t mind. She was very gentle and curious. She kept sniffing my arm (it’s Morning Glory body mist –  thank you very much). Their lashes are long to keep out the sand. It also gives them a feminine, innocent look. Don’t be fooled, they bite. I saw one mean looking camel try to take the top of Mutt’s head off. After we had seen about all the camels we needed to see (and photograph) it became apparent why our tour guides were so accommodating. Money. Oh definitely, we were going to offer them something for showing us around. We’ve been around the block before. But what they asked for was ridiculous! However, I’ve come to learn this culture loves to haggle. It is all a part of the buying process, even in the “tourism” section of the camel market. And CGMan? He loves to haggle! So he spent another ten minutes or so fine tuning his haggling skills while I looked at the baby camels. 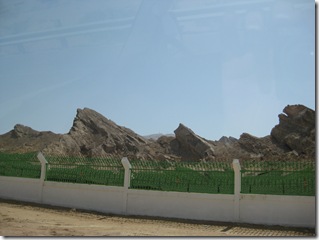 Since CGMan wouldn’t let me buy a camel, we decided to go to the top of the tallest mountain in the emirate. Haleel Jafeet is 1500 meters tall. This was along the way up the curvy road. Let me make mention how wonderful all the roads are in this country. The rock formations are pretty awesome. Thinking that it took millions of years of wind to make those, is pretty mind boggling. 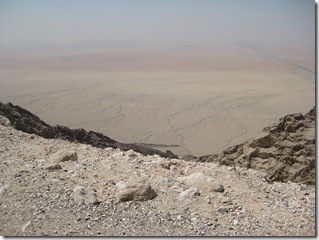 At the top, you can see into the Sultanate of Oman, which is a different country (like Mexico is to the US- see? I’m good at this.) The air is not very clear today because it was windy and blowing sand off the desert. On a clear day, it’s said you can see to the gulf on the Abu Dhabi side. 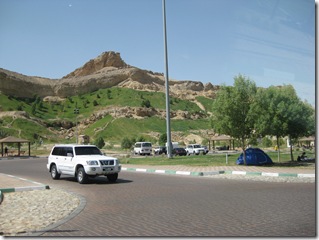 At the bottom of Haleel Jafeet, is a natural hot springs (what did I tell you? It’s like Austin! only Austin has a cold springs) Al Ain is actually listed as an oasis. It is a beautiful green spot in the middle of an otherwise barren desert. They have plenty of date plantations here.

I hope you enjoyed our little trip to Al Ain. I have other pictures and stories about my adventures in Abu Dhabi, but these were the touristy things we did. I will be going back in June for a few weeks. I’m not sure, but I’m thinking there may be a surprise trip in that visit. Yay!