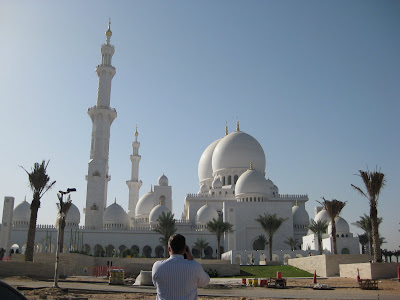 After much discussion, we decided to have a "cultural" outing. We headed to the Sheikh Zayed Mosque in the center of Abu Dhabi. It is HUGE! You can see it from just about anywhere. Depending on who you ask, or which website you look, it is the second or third largest mosque in the world. The first being in Saudi Arabia.

This mosque is named for the beloved ruler, Sheikh Zayed bin Sultan Al Nahyan. How would you like to fill out that check in the grocery store?

They have only within the last year opened the mosque for public tours. That meant letting non-Muslims in to look around. There are still protocols though. For instance, we ladies had to cover from head to toe with an abaya. That's the long black dress with the black headscarf. And of course, no shoes inside the mosque. 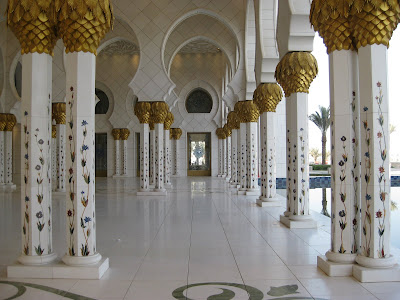 The mosque can hold up to 40,000 worshipers. The floor and walls are marble. All the flowers you see are inlaid, not painted on. It's really quite stunning. This is just one shot, but this walkway goes around the entire compound, and has the flowers all the way around. 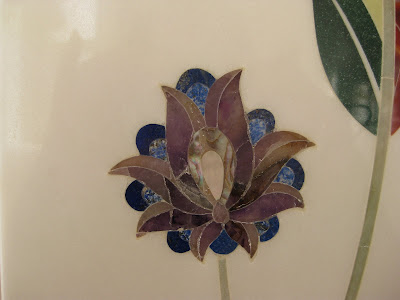 This is just one of the flowers. It's so smooth across, it looks as if it's painted on.

I can't even imagine the manpower that went into this. We did see a couple of men working on the outside area, repairing some of the marble work. 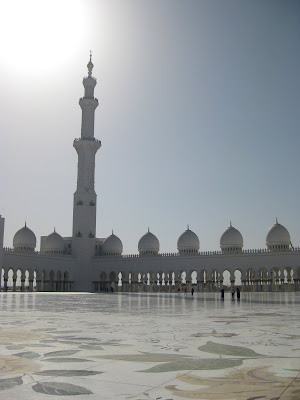 This is standing in the outside prayer area. This can hold 28,000 worshipers. It's so beautiful with the sun behind it. There are areas underneath, too, but we didn't go down there. 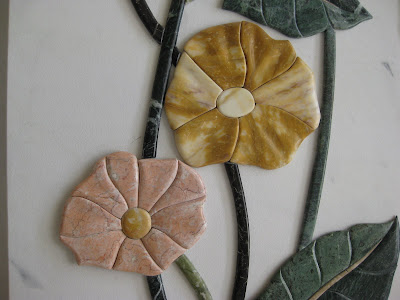 In the entry way to the main mosque, there was more mosaic. This time is was raised, like 3D. So beautiful. You just want to touch it. 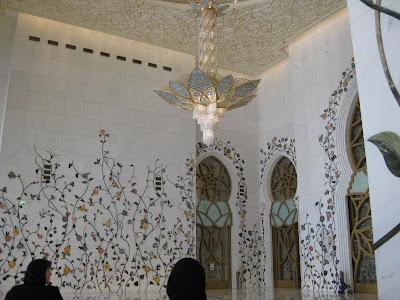 And there was a lot to touch! It seemed endless! 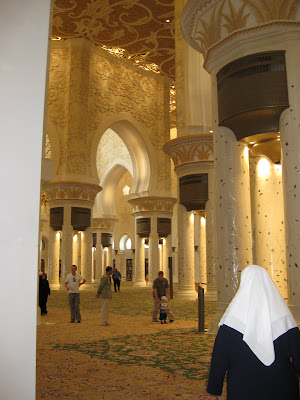 Inside the main mosque is the area for men, it boasts two world record holders. One being the carpet. It measures 5,627 square meters, and was made by around 1,200 weavers, 20 technicians, and 30 workers. The weight of this carpet is 47 tons — 35 tons of wool, and 12 tons of cotton. There are 2,268,000 knots within the carpet. Thank you Wikipedia!


There are two rooms on either side of this main hall for the female worshipers. They hold 1,500 each. 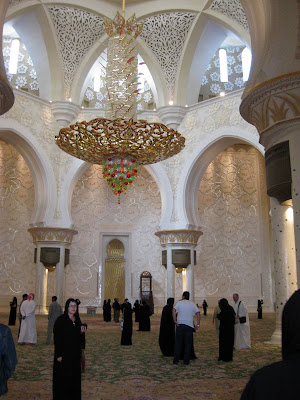 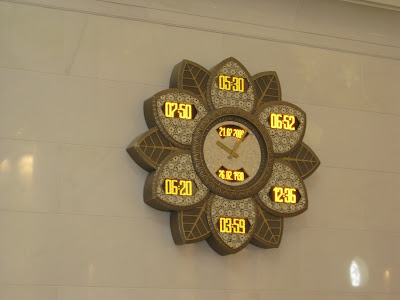 This clock shows the times of worship for that day. It changes every day because it is based on the position of the sun. There are prayers five time a day and a special prayer for each individual time. A prayer cannot be said before its time of day.

The call to prayers can be heard throughout the land. Each mosque has it's own set of speakers, so can broadcast everywhere. It is not unusual to see drivers pull their vehicles to the side of the road for prayer. There are also prayer rooms at the gas stations along the highway. It is considered impolite to watch a man during his prayer and never to photograph.

We enjoyed our time at the mosque. While there, I thought out the Girl and how she always liked to go to church with her friends when she was growing up. She didn't care the religion, she just wanted to go and learn how they worship. She wouldn't be able to witness prayers here, as only Muslims can pray in a mosque.

Next up in the Dawn in Abu Dhabi Adventure is our trip to Al Ain. If anyone is in the market for a camel, I know just the place!
at March 24, 2009