If you fail to prepare, you prepare to fail…

When the Marine was just a boy, he came to me and asked if he could be in the Boy Scouts. It was a bit off the wall because we didn’t know any boy scouts. In fact, I didn’t think we knew any other boys in our neighborhood. When I asked him why he wanted to be a scout, he looked at me with all of his 10 year old sincerity and said “Not that I don’t enjoy being with you, I just think I need to do some guy stuff.”

Apparently, for him, there was a question of whether a single mom would provide any enough guy stuff for him to achieve manhood. 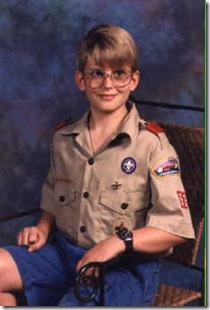 The Marine learned to camp and hike and build fires. Actually, he was too good at building fires and was asked to hand over the flames reins to the scout leader on a number of occasions. He earned all manner of badges that would prepare him for life as a man, like camping, citizenship in the community, lifesaving and personal management. He also connived a dog care badge by having me sign something that said he fed the dog once. Oh yeah, he was preparing to be a man, alright.

Anyway, the Marine also tried do a good turn daily, as scouts are trained to do, but I really don’t think giving his brother a wedgie every morning counts. But he did do nice things for the neighbors, like hanging Christmas lights and mowing lawns.

For him, this was guy stuff. This was preparing to be a grown up man.

Once he hiked his way to Eagle Scout, he turned his head to the future. Ostensibly, he wanted even more guy stuff, because he signed up for the the most manly-man troop there is – the Marine Corps. 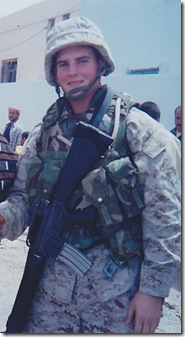 He learned to shoot all kinds of guns, fight with big Q-tip looking things, crawl through mud, climb high walls and many other sweat inducing things. This is the kind of stuff that makes you strong, not just in body but in mind, as well. It must have been the epitome of guy stuff. I can’t imagine any organization offering more than the Marine Corps in the masculinity department.

If the Corps didn’t prepare you to be a man, nothing would, I suppose. (I mean absolutely no disrespect to female Marines and other servicewomen. Honestly. You guys rock and can kick the asses of most all of the men I know) During his years in the Corps, he has also learned the art of patience, communication and a well thought out plan of attack.

From the first time he asked about scouts, it occurred to me that he was preparing to be a man. Preparing to find his place in this world. All of his choices were designed to help him do just that. He has taken away so much from each of his organizations, from the Scout Law:
A Scout is trustworthy, loyal, helpful, friendly, courteous, kind, obedient, cheerful, thrifty, brave, clean, and reverent.
to the Marine Corps Values: Honor, Courage, Commitment,
that I am quite sure there is no one more prepared for his place in the world than the Marine. 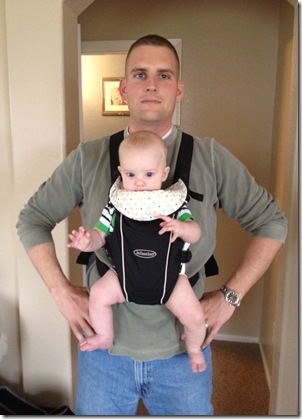 How’s that dog care badge workin for ya?