On the last full day that my hens girlfriends were here, we lounged around the house, just enjoying each others company. We talked about all the other girls we know our husbands, jobs, lack of jobs, kids and impending grandbabies, just like women do when you get more than one of them in a room together.

Scottish Woman and I took the dogs for a walk at their favorite dog park. She was mightily impressed with the fall leaves. She said it reminded her of Scotland, because as I may have mentioned, there isn’t much in the way of fall colors, or autumn at all for that matter, in Texas. 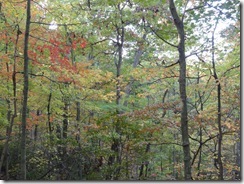 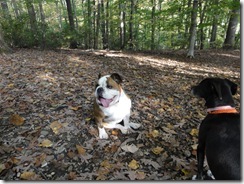 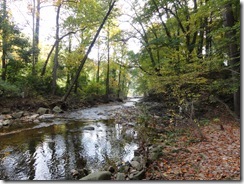 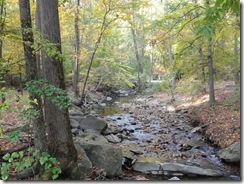 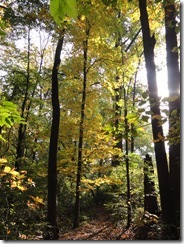 Later in the afternoon, we went to the Kennedy Center for one of my favorite all time plays, Shear Madness. The play is the longest running, non-musical in the history of theater. I love it. It is a comical murder mystery set in a unisex beauty salon. The audience participation keeps it fresh every single time. The audience gets to spot clues and even question the suspects before making the decision as to whodunit. It is filled with improv and sly quips involving current topics and people. We laughed until we cried. I may even have peed a little, it’s that funny.

During the intermission, we stepped onto the terrace to take some pictures. The views from here are stunning. 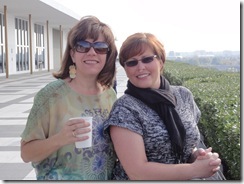 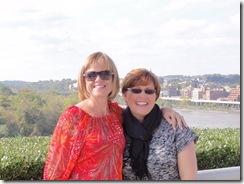 Oh yeah, and the views of the surrounding area, those are stunning, too. 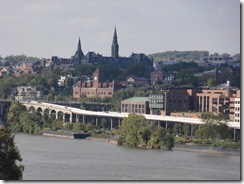 After laughing off all of our mascara and wishing the little gay hairdresser was ours to keep, we headed to the mussel place. I had promised the girls we would go there because every time I go, I send them pictures of the table covered in mussels with little taunts of neener neener neener! or some such mature thing.

On the way there, they asked what the name of the place was, so they could look up the menu. Well, I always call it the mussel place because why would you even want to order something else when they have 5 different flavors of mussels? Which is my way of saying (yet again) I don’t know.

The mussel place is, in fact, called Granville Moore’s, but for me, it will always be the mussel place. We ordered all five flavors they had that night and three (3!!) large orders of frites. OMG, frites! Sharon was not a fan of the mussels, so she ordered a chicken wrap that looked great, you know, for not being mussels. Oh well, more for me. The only picture I got of the evening was of Chef/Photog Craig, hogging all the truffle mayonnaise to dip the frites. 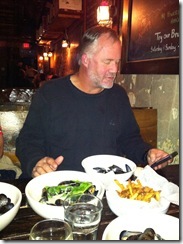 On the way home, I drove slowly past one of my favorite photo stops, so the girls could get a picture: 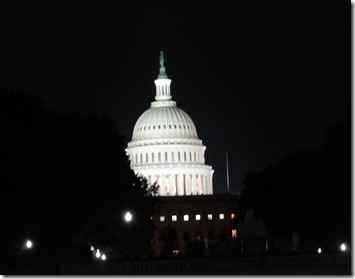 The next day, the last day, we made a stop at the Newseum before heading to the airport. It was a perfect day to go as there weren’t a lot of people there. I tell you, in the summertime, the place is overrun with tourists. Sheesh. Oh gawd, how snobby do I sound?? Especially considering all of those tourists, including my two, know more about DC than I do!

Anyway, the Newseum is awesome and I totally recommend it. It’s a little pricey, considering the Smithsonian museums are free, but it’s a two day pass. I learn something new every time I go. It covers all aspects of news and journalism. It also has every Pulitzer prize winning photograph, along with the stories that go with them. There is an awesome, not to be missed, exhibit featuring the 9/11 terrorist attacks, including the antenna from the World Trade Center.

After that, it was time to go. I didn’t want to. I figured if I didn’t take them to the airport, they couldn’t leave, right? But leave they did. I think we all sniffled a little. I cannot wait for the next time they come to visit. I plan to know quite a lot more about this great city before they get here!

We had a great weekend, and as I said before, no shortage of laughter. One of my favorite moments though, was walking back from the mussel place. This is the conversation I overheard between Scottish Woman and Sharon:

Sharon: I’m sorry I didn’t eat the mussels, I just couldn’t do it.
Scottish Woman: Don’t worry about it. It’s just cannon fodder for me to use on you later.
S: What’s cannon fodder?
SW: You know, stuff you fill the cannon with before you shoot it off.
S: Well! No wonder you Brits lost the war! Our people used bullets!

I tell you, I almost fell off the sidewalk. Those two did stuff like that for four days. Non. Stop.
I loved every minute of it. I miss them already.

Until next time, ladies!!