It has come to my attention that you have not looked in my soup pot in a while. We had a rainy day, so I thought a bowl of chili was in order. I know it’s spring and all, but some days need a pot of simmering goodness on the stove.

Let me protect my Texas residency by saying this is not a “proper” chili. And by proper, I mean up to Texas standards and by that I mean beef. This is a chicken chili recipe that I would never attempt to enter in a chili cook-off, lest I be laughed out of Texas. To enter a proper chili cook-off in Texas, your chili has to have beef and beer and beans and a little more beef. I do have an honorable mention recipe that I will share on another day.

This recipe was a favorite of the Marine and one of the first he asked for when he was on his own. I’m fairly certain he made it illegally in his barracks from time to time, causing many a Marine to stop, sniff and salivate. Unless you have an iron stomach, don’t make it like he does, hot, hot, hot! The Marine does love some spicy!

This is an easy recipe that can be whipped up in less than an hour. Don’t you love that?

Let’s assemble the ingredients, shall we? 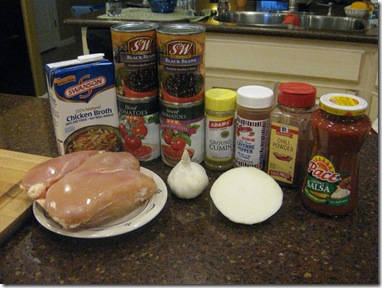 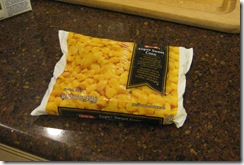 First you put a little oil in the pot, then dice up two pounds of chicken, one small onion and four cloves of garlic.
Or you can cheat like me and use garlic in a jar and frozen diced onions: 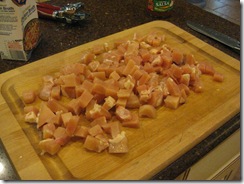 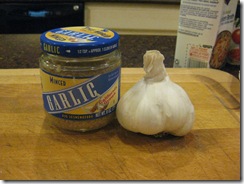 Oh, and two medium sweet red peppers, which I didn’t have and didn’t miss all that much.

Sautee that in the pot until the chicken is no longer pink. Then add 3 tablespoons of chili powder, 2 teaspoons cumin, 1/4 teaspoon (or 1/8 for not so spicy) cayenne pepper. Cook and stir one minute, to thicken. 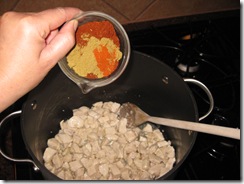 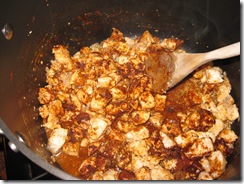 Add one can of diced tomatoes (I like tomatoes, so I use two cans) and two cans of chicken broth; bring to a boil. Reduce the heat and simmer, uncovered for about 15 minutes. 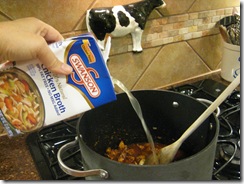 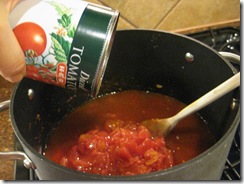 That gives you time to open, drain and rinse two cans of kidney beans (I use black beans and sometimes one of each). After 15 minutes (or less, if time is demanding) add your beans, 1 jar (12oz) of your favorite salsa, a small package of frozen corn (or one can, drained) 1/2 teaspoon of salt and 1/2 teaspoon of pepper and bring to a boil. 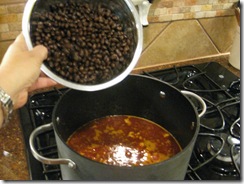 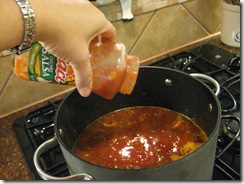 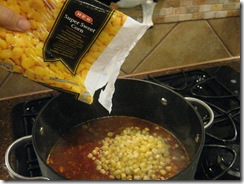 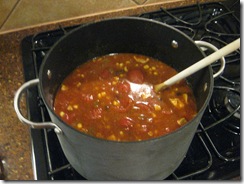 Reduce the heat and simmer, covered, for another 10-15 minutes, or until the chicken is tender. See? less than an hour! 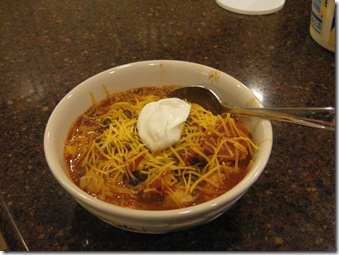 I serve this with a little cheese sprinkled on and a dollop of sour cream, to help lessen  the heat because sometimes I’ve been known to make it a little too spicy. You can adjust the heat to your own tastes, by adjusting the cayenne (or leaving it out) and using a mild salsa.