Talk about a rude awakening…

I don’t have a post today because I was up at 3:08 in the A.M. changing the battery in not one, but two smoke alarms. I certainly don’t know why batteries die in the wee hours of the morning, but they do. Have you ever noticed that? You can lay there and try to ignore the first earsplitting, REM killing, 183476 decibel beep (and really, beep is too soft of a word for the noise that comes out of a smoke detector with a dying battery, in the middle of the night). But no, my friend, just as you’re drifting back to sleep, after telling yourself the big, fat lie that it will only beep once, it hits you again!

Then you have to get up and 1.) try to figure out which detector is dying (not an easy task at 3:11 in the effing A.M.)  2.) haul yourself out to the garage where it’s –15° to get the ladder and bring it in underneath the smoke alarm that is dying. 3.) wrestle with said detector to get it off, to be able to get to the battery compartment 4.) search two separate junk drawers to find extra battery 4.) bend a kitchen knife trying to get the battery door open and just when you do, you hear that demonic beep from the other side of the house. That’s when you realize you’ve taken down the WRONG smoke alarm! So you start over, drag the ladder, take down the second offending smoke alarm and throw both of them on the kitchen counter and hope there isn’t a fire between now and 7 A.M.

But wait, before you go back to bed, you have to take the dogs out for a pee because you woke them up with all the beeping and cussing and dragging of ladders and such. Oh, and it’s raining.

Because I don’t have a post for you today, I’m going to share this little video with you. I believe most of us can relate. Except maybe Meg, because she’s such a youngster. 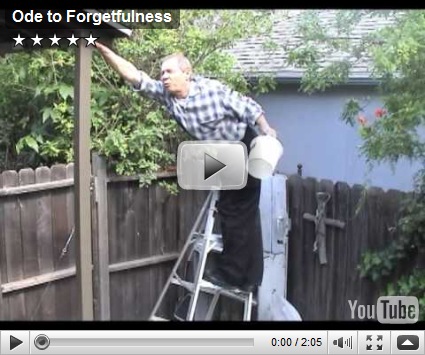 Thank you GiGi, for finding it (and letting me copy you!)

If you think after last night’s debacle I’ll remember to change the batteries twice a year like other people do, see above.