It’s okay, they know me here…

It was a really long dream about how I hadn’t slept in like three days and I think I might have been going crazy. When I woke up this morning, I was all, “How many days have I been awake? I don’t want to go even more crazy!”

On a totally unrelated note, I am teaching Zoe how to sneeze on command. She already knows how to sneeze when she gets something up her nose. She likes doing tricks and sneezes pretty well, until I get the video camera out. Then she acts like she has no idea what I’m talking about. Zoe no habla Englisi. 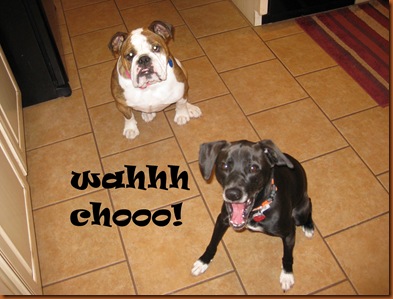 I would like to teach Phoebe not to drool while watching Zoe do tricks. It really makes a mess on the floor, and you know she’s not going to clean it up. And then later on, I’ll be walking through to get yet another snack out of the fridge and hit the puddle of drool, slip and fall right on my keester. Maybe I should teach Zoe something useful, like calling 911.

Speaking of phones, I suppose I should put down the iPhone and do something important. You know, other than making the dog think she has hay fever. One of my friends suggested I play a game with her over the iPhone. I told her I really wasn’t into games, but would give it a try. If I could fit it into my busy schedule of nose wiping and drool mopping. I found the app and now I am so hooked on this game!

It’s called Words with Friends and it’s just like Scrabble. It’s only taken a day, but I am addicted. There is no math! This is definitely a game I can live with. And live with it, I do. I’m checking it every 20 seconds to see if she’s made her play, because I already have my next word in mind. But, she has three kids and a husband and stuff, so she’s not sitting on top of her iPhone like I am. Basically, she has a life.

If you want to play, you can find me in my own little world, dreaming of insomnia.