do not always do what the Greeks do. They drive their scooters like maniacs (present scooter-driver notwithstanding), they litter, they graffiti everything and they smoke. Every. Body. smokes!!

I wanted to shout out to Meg over at Becoming a Non-Smoker, that it was almost tempting to have a smoke. But I did not. And I do believe, I was the only person in Greece not doing so. I couldn’t believe it. Even in the hospital on Crete! Of course, no smoking in the room, but you could walk to the end of your bed, open the door to a three foot balcony and have one there. Oh, and the mini-market I mentioned, was also a lunch room of sorts and you could smoke in there, as a lot of people did. *cough*cough*

So anyway, I said I would show pictures of Athens today, not talk about all the black lung in Greece.

Here are a few pictures with the little bit of knowledge I gleaned this morning from Wikipedia: 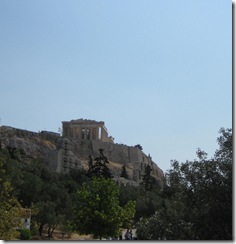 Acropolis is the name of the 3 hectares of hilltop where the Parthenon and other buildings are located. 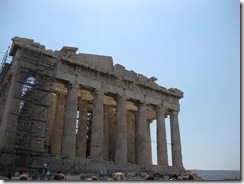 The Parthenon is the temple to the Greek Goddess Athena. 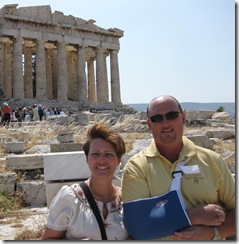 It was a steady uphill walk to get there, but not too steep, so it was okay. It was a beautiful, breezy day. 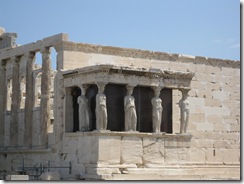 Once you get up there, you walk in a big circle so as to see all the buildings and other ruins. This is the Erechtheum and was built in 407 BC. And those women still look good! 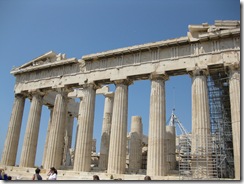 This is the back side of the Parthenon. There was a woman as we started, who wanted to give us a guided tour. We were all Nah, we can find our way around. Well, if you ever go to the Parthenon…take the tour! It’s worth the few Euros to hear the stories of Greek mythology. I am taking the stand that we were incapable of coherent thought due to post traumatic stress  or pain pills or something. At least I took a lot of pictures.

I have plenty more pictures and stories of Athens. Tomorrow, we’ll learn about graffiti and stray dogs, lots of them.