Now that CGMan is overseas and Skater has betrayed me moved out, my road trips are of a different sort.

I run up to Dallas every once in a while to see my dad and stepmum. That’s any easy one because it’s only three hours away. Shoot, Iron Butt would do that if they were having something good for dinner!

My big trips are the ones I take twice a year. I drive to Wow’s house in the mid-south. It’s an eleven hour drive. While the trip up there is not very adventurous, once I get there, it gets pretty fun.

Last May was my first Wow trip. I drove up to her house, picked her up, and drove to KY with a stop at my sister’s. Then I drove Wow to her sister’s house further “up the road”. Where “up the road” means several hours worth of driving. Then I drove the two of them further up KY so we could decorate our family graves for Memorial Day.

You can see the photo story here. (note: to see the ‘story’ you have to hover your cursor over the photo title) I had such fun with those two, that I did it again in the fall.

You might be asking why I don’t just fly up there and then rent a car? This is why: 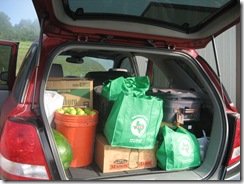 Because Wow wanted a bucket of apples for frying. Wow wanted two cases of green beans, a case of pickles (Auntie Narmie makes the best!) and a few jars of homemade kraut. Then there were all the books she found at the flea market. Yes, that is a watermelon you see. It’s not like they don’t have watermelons where Wow lives. I guess they’re just not as good as ones you pick yourself. And by pick yourself, I mean the one Wow made me haul up from the garden for her.

Yeah, they won’t let me bring all that home on the plane. Because what Narmie gave Wow, she gave me, too. I told them both that if this kept up, I was gonna have to get a bigger SUV.

It’s Mother’s Day time again and I will be heading out for my Wow trip. This time will be bittersweet, because one of the graves we will be decorating is my stepdad, who passed away shortly after my visit there in the fall.

Knowing Wow and her sister, Narmie, there will be plenty of laughter and of course, my favorite…stories from when they were girls. Who needs roadside attractions when I have these two cut-ups? I do cherish this trip.

I’ll try to stay in touch while on my journey. I’m sure I’ll have plenty to talk about, once I get back.