You can’t keep a squirrel on the ground…

And neither can you keep squirrels in your attic.

When my BFF from Canada was here, she told me there were squirrels in the attic. I was appalled. No way! This couldn’t be happening! I had gone all Martha Stewart to make sure the guest rooms were pretty and inviting.

I do not recall inviting squirrels!!

I had spent a lot of time on those guest rooms and matching bathrooms. I had finally found the right feel for the rooms and painted them (of course). I made the bathrooms so pretty with matching towels and girly scented soaps and soothing lotions.

In the bedrooms, I had everything just so for my guests. Right down to water carafes, remotes for the TVs and setting the ceiling fans to just the right spin. And now there were squirrels?!

Don’t even try to convince me you’re an asset to this house. Nice try, though. The flag is a nice touch.

I suppose it’s my own fault. I feed them. They have their own little feeder box on the farthest tree in the backyard. How was I to know to a squirrel that is an invitation to move in? And start a family? Because apparently that is what they’ve been doing.

With a heavy heart, knowing that my “perfect hostess” status has now been compromised, I called Rick at the pest control. He came out, set some traps and closed up the nine (nine!) entrances they had made into the attic. On that first day, he caught one. And now, several days later, he caught Junior. 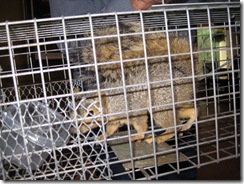 He promised me he would take him five miles down the road and release him. Rick tells me that he has to go at least 5 miles or they will find their way back. Here’s another tidbit, since we’re learning about critters today: Raccoons have to be taken over 10 miles away!! Now that is some serious trash diggers.

Well, at least the squirrels will be gone from the attic before the next BFF comes for a visit. That’s a good thing for the squirrels, trust me.