When you look this good…

Austin has some fabulous restaurants. It is really hard to get a bad meal in this town. CGMan and I have been working our way through them, and there are a lot! We love the food in Austin.

When my BFF was here from Canada with her sister, I took them out to eat. It’s one of my favorite places to take “foreigners”. And by foreigners, I mean those people who are not from Texas. Because apparently, we’re going to be our own country. Does that mean “Texan” will become an official language? Will kids in Oklahoma have to take it in school, in case they ever have to leave their country to get a job? Or will we have to revert back to Spanish? Just wonderin.

We get in the car with the BFFs and the Girl and head out. This place is way out there. Through the desert and over the dam, way out there. Not much to see along the way. The BFFs might have been worried we were going to just drop them in the desert somewhere. They’ve heard about all the crime in the States, you know.

We finally get there and get a good table. I ordered for them a fun Austin-type drink. I was DD, so I didn’t have one. I’ve had them before, and whoooo-eeee they sock a punch. There was live music, natch. For those of you who might not know, Austin is the “Live Music Capital of the World”. There aren’t too many places in Austin that don’t have a live band at least once a week. Shoot, even Nordstrom’s has live music. He’s a long haired, hippy looking fellow that plays the piano. He’s awesome.

This place is great to take people who have never been to Austin, but really, you don’t come to here for the food. Because, honestly? It sucks. There is just no way to say it nicely. And because Austin is so weird, they don’t care that their food sucks. In fact, they’re kinda known for it.

I’ve been to this place several times, always with the hope that the food will be good. Nope. It just isn’t. I will learn, someday, to just go for the big fancy rum drinks and leave the food alone. Maybe take in a dance lesson or two. I have asked around as to why this place has such lousy food. And the answer has always been this:

… when you have views like this, who cares about the food? 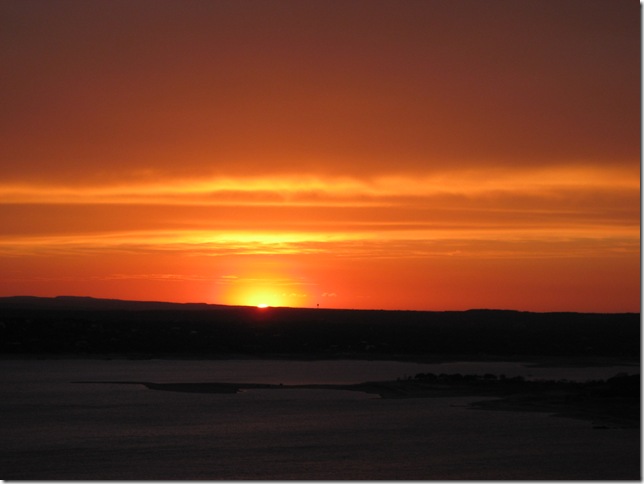