My favorite by far was the Camel Races!! OMG! It was so fun, so Arabic, so bizarre! We got there early in the morning and encountered a huge fog bank. That was bizarre in itself, but it was like being in a time machine. As we drove along though the dense fog, out of nowhere would appear a herder on a camel, tugging along several others toward the race track. There was nothing 20th century about it! SO cool! 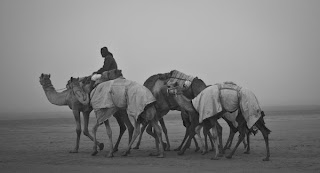 The races themselves were unbelievable. Organized chaos. The camels are lined up at the start, with only a rope across the line. The "jockeys" (who don't actually ride- more on that later) run under the rope, holding the lead for their camel. Who are all snuggling up to one another, anxious for the race to start. Once the rope goes up, the "jockeys" drop and roll out of the way of a herd of thundering camels! 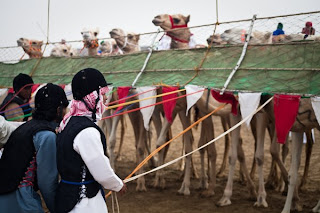 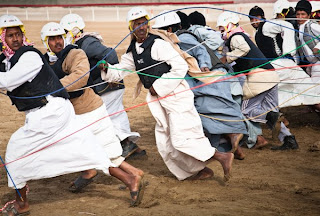 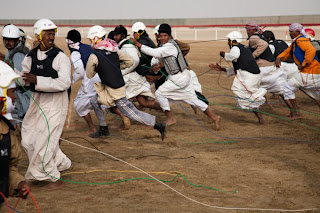 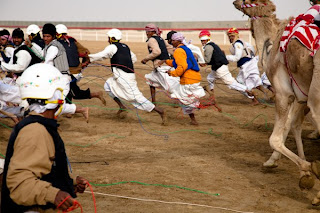 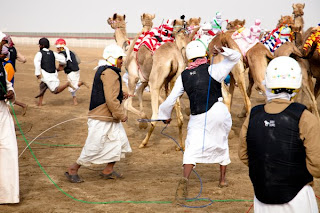 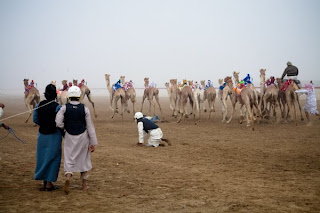 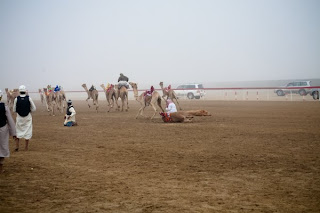 Sometimes even a camel goes down!

Not to worry, they had on helmets and what appeared to be kevlar vests. Not the camels, alright? The jockeys! Okay, so they're off! While they are running inside the track, there are these SUVs driving alongside the outside of the track (remember-it's VERY foggy!) honking their horns and yelling (lalalalalalaaaaiiieeeelalalala) out the windows at the camels.

The track we were at was a 5k U-shaped track. The camels run up, turn and come back the other side. Okay, now let me tell you who is driving the camels. It is a little robot monkey. (I had hoped for real monkeys, but this was pretty cool) It is shaped like a small monkey (even with a little head), he sits to the rear of the hump and has one arm, that is a small whip looking thing. 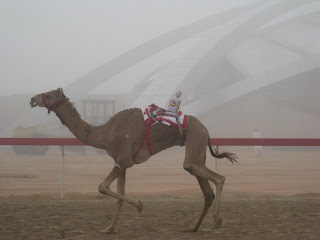 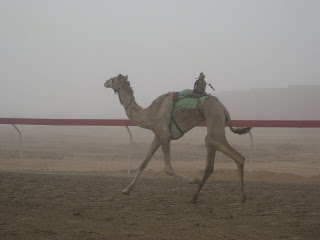 After several races, we figured out that the guys in the SUVs are the ones working the little robots, via a transmitter. We were fascinated!! CGMan so much so, that he started walking around to all the SUV guys, looking for one who spoke English (did I tell you we were the only white people there? yep) so he finds one and asks if he and his friend Craig can ride with them. Leave it to the Buckeye to get a ride! LOL He said that was a lot of fun but he feared for his life!! All the yelling, the other SUVs, the fog and the SPEED! all in the sand! OMG, it was the best day ever! 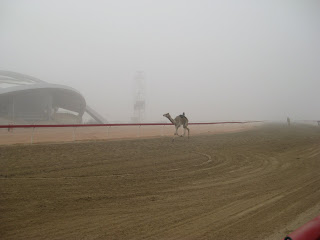 Almost all photographs are courtesy of our friend Craig Corl, who does not yet have a website displaying all his wonderful photos. Thank you Craig, for the use of the pictures. As soon as you get out of the time machine, get a website, would ya?
at March 10, 2009